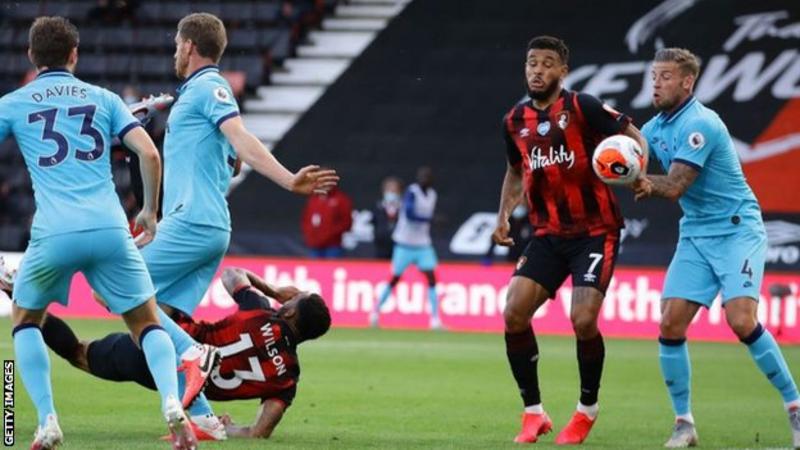 Bournemouth thought they had snatched a significant win in their bid to avoid relegation but were denied after Callum Wilson’s overhead kick was ruled out by the video assistant referee.

The Cherries can take positives from ending a five-game losing run to earn a draw against Spurs but remain in the drop zone, three points from a position of safety.

A point also does little to further Spurs’ European ambitions, though the visitors felt they should have had a penalty for a push on forward Harry Kane.

Kane did not have a touch in the opposition box until the 78th minute as a lacklustre Spurs side failed to register a shot on target.

Bournemouth substitute Harry Wilson forced Hugo Lloris into a late save while King had earlier put the ball in the net from close range, but Stanislas was offside earlier in the move.

There was also concern for Cherries defender Adam Smith, who was carried off on a stretcher following lengthy treatment after suffering a head injury in a heavy collision with Ben Davies.

Kane appeared to be shoved in the back by King from a corner but VAR looked at the incident and decided it was not a foul.

It leaves Tottenham ninth, one point behind north London rivals Arsenal, who they face on Sunday.

Bournemouth boss Eddie Howe says his love for the club is the driving factor behind his desire to extend their five-year stay in the top flight, having guided the Cherries from the fourth tier to the Premier League over two spells as manager.

After his side shipped nine goals in their previous two outings, the 42-year-old will take comfort in a clean sheet and a point against last year’s Champions League finalists.

But it could have been more for the hosts, had Callum Wilson’s effort not clipped team-mate King’s arm on its way into the net deep into stoppage time.

There was still time for namesake Harry to engineer a glorious chance to win it for Howe’s outfit, but the on-loan Liverpool winger fired straight at Tottenham goalkeeper Lloris.

Howe’s passion has seen the Cherries scale previously unthinkable heights, but they realistically need to win two of their remaining fixtures – against Leicester, Manchester City, rivals Southampton and Everton – to stay in the top flight. 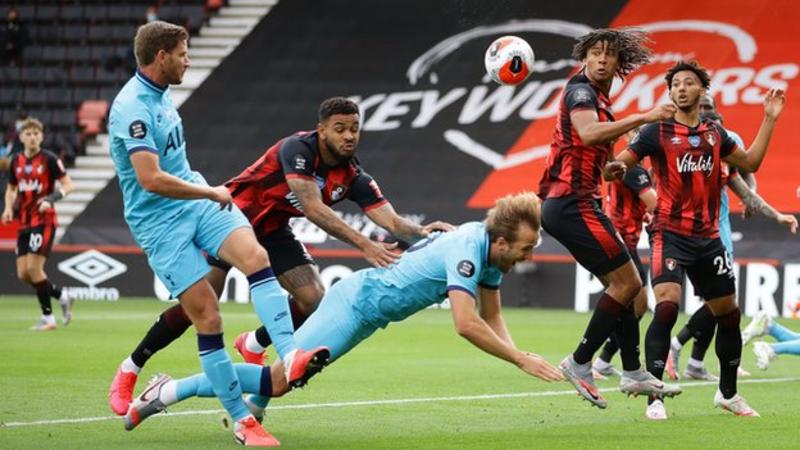 Tottenham still have a Europa League spot to play for this season, though boss Mourinho’s focus will no doubt already be on the rebuild required for next term.

On the evidence of Thursday’s performance, he has a big job.

Spurs have invested in a new stadium, world-class infrastructure and a high-profile manager but look to be lacking on the pitch compared with their Champions League-chasing rivals.

Chairman Daniel Levy will not want to contemplate an extended absence from Europe’s elite competition and will be expecting Mourinho to rediscover some of the magic that saw him win three Premier League titles to make sure that does not happen.

Spurs were wasteful, lethargic and lacking in ideas in the opening 45 minutes, having just four touches in the opposition box with none of those coming for Kane, who was more involved in his own penalty area.

The club’s record signing, Tanguy Ndombele, had played just 19 minutes since being hauled off at half-time during Spurs’ 1-1 draw at Burnley in March but was thrown on at the break to try to inject some life into the visitors.

The introduction of the £55m midfielder, who has been linked with a move to Barcelona this summer, and forward Son Heung-min did lead to more urgency but Bournemouth were rarely troubled.

Mourinho will no doubt be happy with recording a second successive clean sheet, especially without suspended centre-back Eric Dier, but Spurs’ lack of attacking inventiveness will be worrying. 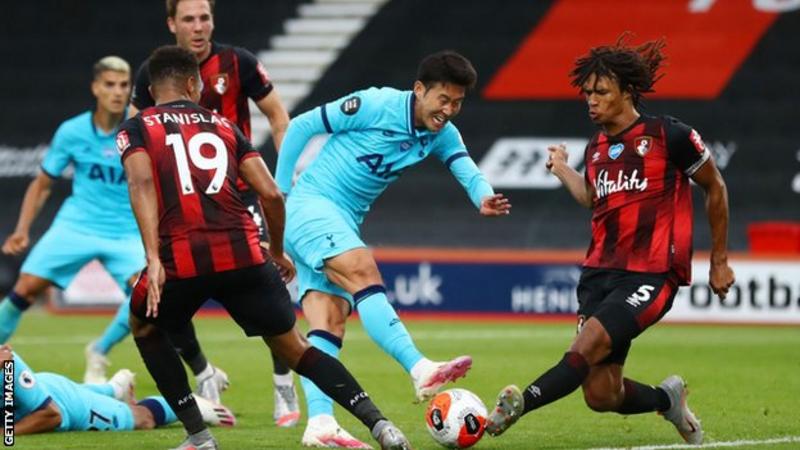 Everybody knows it’s a penalty – Mourinho

Tottenham boss Jose Mourinho speaking to Sky Sports: “The game has the most important moment [Kane penalty decision] and I don’t want to say any more in relation to that. Everybody knows. Everybody.

“The performance was not good enough. Bournemouth surprised me in the way they played. It was a good result for them and they got the point they wanted.

“We were dominant behind but then there was lack of sharpness in the attacking areas. I made changes, I think the changes helped to improve the game in the last half but we didn’t score.”

On the penalty decision by VAR: “The same referee who did the VAR decision against Sheffield United – Michael Oliver. Opinions matter. It’s not only mine, everybody knows that is a penalty and when I say everybody, I mean everybody. Everybody.”

Diego Rico (Bournemouth) wins a free kick in the defensive half.

Harry Wilson (Bournemouth) is shown the yellow card for a bad foul.

Son Heung-Min (Tottenham Hotspur) wins a free kick in the defensive half.

Attempt blocked. Callum Wilson (Bournemouth) left footed shot from the centre of the box is blocked. Assisted by Jefferson Lerma.

Attempt missed. Callum Wilson (Bournemouth) right footed shot from the centre of the box is close, but misses to the right. Assisted by Lloyd Kelly with a headed pass following a set piece situation.

Harry Wilson (Bournemouth) wins a free kick in the attacking half.

Dan Gosling (Bournemouth) is shown the yellow card for a bad foul.

Erik Lamela (Tottenham Hotspur) wins a free kick in the defensive half.

Tanguy Ndombele (Tottenham Hotspur) is shown the yellow card for a bad foul.

Attempt missed. Erik Lamela (Tottenham Hotspur) header from the centre of the box is close, but misses to the left.

Harry Wilson (Bournemouth) wins a free kick in the defensive half.

Attempt missed. Joshua King (Bournemouth) header from the centre of the box is close, but misses to the right. Assisted by Junior Stanislas with a cross following a corner.

Attempt blocked. Harry Wilson (Bournemouth) right footed shot from the left side of the six yard box is blocked. Assisted by Joshua King.

Attempt missed. Toby Alderweireld (Tottenham Hotspur) header from the right side of the box is high and wide to the right. Assisted by Erik Lamela with a cross following a corner.