A Melton City councillor has described Monday night’s council vote on whether to give the green light to Essendon’s pokies plan in the area as a “difficult situation”.

Nine Melton councillors are set to vote on whether or not to approve a proposed 29-year lease extension, which would allow the Bombers to continue to operate the Melton Country Club until the end of 2047. 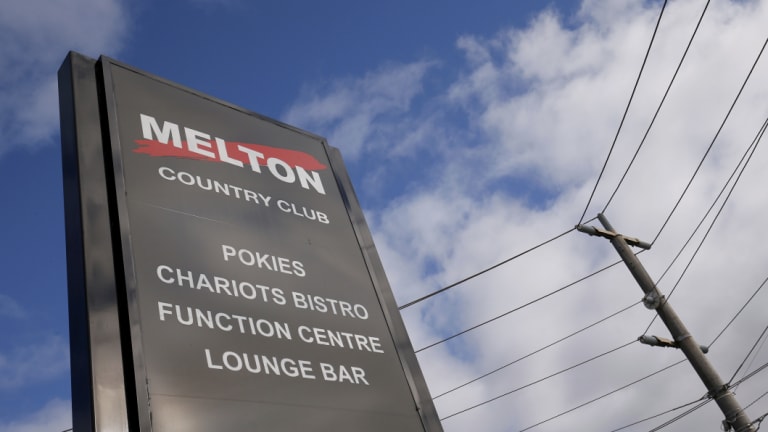 Essendon collected over $11 million from its two pokies venues in 2016-17. Credit:Darrian Traynor

The Age revealed in July that Essendon were in discussions to prolong their lease at the venue, where the Dons reap the profits of 89 poker machines.

That is despite the moves in recent times of Collingwood, Melbourne, Geelong and the Western Bulldogs, all of whom have planned exits from the gaming industry.

Those four clubs are set to join North Melbourne, who for a decade have been the sole Victorian club not to profit from pokies.

Anti-gambling campaigner Tim Costello urged the council to make a “brave decision” and reject the Essendon extension despite a recommendation to proceed from Melton City Council legal officer Maree Stellini.

Melton councillor Steve Abboushi said he could see both sides of the argument.

“It’s a difficult situation. There are lots of different views out there. This is my personal view,” Cr Abboushi said.

“I’d be very cautious as a councillor to stand in front of my local community and say, ‘Hey, although we’ve got space issues … although we can’t fit you all into our community centres or the like, we have a real opportunity to hand over the Melton Country Club back to the community, where it belongs.

“That being said, the officer is recommending that we extend the lease. So there need to be some very tough decisions made at tomorrow night’s council meeting.

“I’m going to go into chamber with an open mind, having weighed up the benefits of Essendon football club being there, i.e. their community benefits program and how that assists community clubs, versus the millions of dollars the venue rips out of our community, and the need for adequate community space.”

Alliance for Gambling Reform director Costello wants the council to allow the current lease to expire at the end of its current term in 2022.

“Tonight is an important moment for gambling reform because Australians are the world’s biggest gamblers with $24 billion in annual losses and pokies [including at casinos] contribute about $14 billion to that figure, $3.2 billion of which comes from Victorians,” Costello said.

“With a deluge of television advertising and kids getting increasingly addicted to the screen, the Australian community has never been more concerned about gambling and they want their elected representatives to do something about it.

"This is why AFL clubs such as Collingwood, Melbourne and the Western Bulldogs have all announced they are divesting their poker machines and why City of Melton should take this opportunity to force Essendon to do likewise.

“If the Melton councillors are brave and reject the officer recommendation, it will have a powerful motivating impact on the gambling reform movement, following on from the ground-breaking new gambling policy approved unanimously by City of Darebin councillors last Monday.”

Essendon were contacted for comment. The Bombers recently posted a $2.3 million profit, and also own 101 machines at Windy Hill.