India's bold call to pull out a rarely used plan and overlook a front-line spinner was questioned on a day Marcus Harris rubber-stamped his spot at the top of Australia's order.

The tourists opted to unleash four fast bowlers without a specialist spinner for just the third time in their Test history, in a bid to prosper on a green, quick but sometimes inconsistent drop-in deck at Perth's new Optus Stadium. 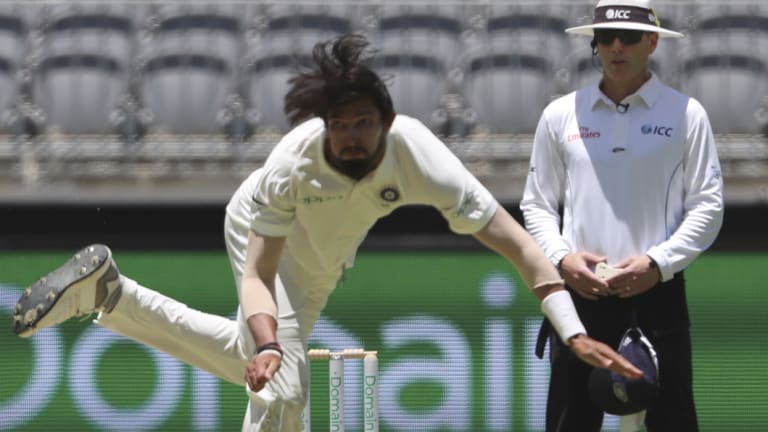 That master spinner Ravi Ashwin was ruled out because of an abdominal strain meant India could have drafted in Ravindra Jadeja, the left-arm spinner with 189 wickets in 39 Tests. Instead, they went for paceman Umesh Yadav joining Ishant Sharma, Jusprit Bumrah and Mohammed Shami and the part-time spin of all-rounder Hanuma Vihari, in only his second Test.

Vihari claimed two key wickets – Harris and Shaun Marsh, each caught at slip – but the major question remains whether Jadeja will be missed later in the game.

By stumps, the tourists had rebounded from a tough start to the day to have Australia 6-277 in front of 20,746 fans, an attendance in line with pre-match expectations.

"The game is in the balance," Bumrah said.

They were also relieved to Sharma back on the field after, having bowled the first over with the second new ball, he had gone off with an apparent side strain.

The only Tests in which India had previously opted for four quicks without a key spinner were in Perth in 2012, when they lost, and against South Africa in Johannesburg this year, when they prevailed.

Regardless, former Australian captain Allan Border suggested the tourists could particularly miss the use of a specialist spinner later in the game, declaring "one of Australia's weaknesses in the past few years has been left-arm spin".

Sri Lankan Rangana Herath, who retired last month, Jadeja and, in 2014, Pakistan's Zulfiqar Babar, have all troubled the Australians in recent times.

Former England captain Michael Vaughan said India's puzzling selection had also raised concerns about their batting depth, for Ashwin is more than competent with blade in hand coming in at No.8.

On a deck having baked under 40-degree heat, captain Virat Kohli could rue not having a specialist spinner able to capitalise on indifferent bounce if this pitch rapidly deteriorates.

Having lost the toss, the tourists were left to rue Sharma's opening spell, for the spearhead was still clearly spooked by the two no-balls which cost at least one wicket in Adelaide. Sharma's average pace was down about 10km/h to the mid-120s, as he focused on ensuring he did not overstep the popping crease, while he pitched too short.

CricViz statistics show that 56 per cent of his deliveries between overs one and 30 in Adelaide were on a good line and length. That was not the case before tea in Perth, prompting Australian great Glenn McGrath to declare the issue had "got in his mind … and he is really trying to fix it".

His line and pace were better later in the day, and he was rewarded by having Peter Handscomb caught at slip and the dangerous Travis Head snapped up at third man off a wild drive.

Sharma's early troubles had helped Harris and Aaron Finch compile only Australia's second century opening stand of the year, prospering from an attack that too often failed to deliver a consistent fuller length, before each fell after lunch.

In front of his home crowd, Harris appeared well on his way to a maiden Test century before he was befuddled by a Vihari delivery which reared and almost followed the batsman, who bunted a catch to first slip.

"One thing they haven't as done as much as Adelaide is bring the batsmen forward," he said.

"If they are playing off the back foot, they have more time to leave the ball and it generally means it is going over the stumps."

Saker's comments were also a word of warning to his own fast bowlers, who are determined to not fall into the same trap with the four-Test series already at a critical juncture.