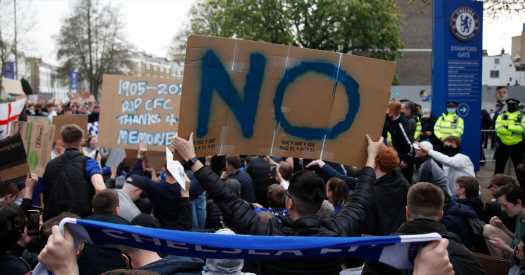 They must have known those they had abandoned would cry havoc. No matter how wealthy or out of touch the billionaires and oligarchs and princes behind the scheme for a European superleague were, they could not have imagined that the leagues, federations and clubs they planned to jettison in pursuit of bottomless wealth would greet their plan with garlands and cheers.

They must have anticipated, too, some sort of backlash from fans. They could not have expected the greatest change in half a century to the world’s most popular sport — a sport with a ferocious, intensely personal passion coded into its genes — would be met with acquiescence and apathy, let alone universal approval.

As they war-gamed how the launch of their galaxy brain idea might play out, how the prospect of a fundamental redrawing of the landscape of European soccer might be received, at least one scenario must have involved banners being draped from railings and protests swelling on the streets. 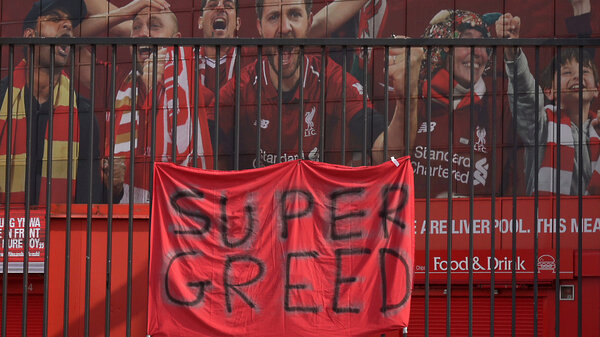 Perhaps they did know. Perhaps they thought they could lose their fans and their peers and their former institutions and still ride it out. Perhaps what scuppered a project that has — for all the sophistry of Florentino Pérez, the two-day president of the 48-hour revolution — been years in the making was the fact they lost everyone else, too.

By Monday, less than a day into their brave new world, they had lost the governments, and they had lost the European Union. Not long after, they lost the television networks that, ultimately, would have had to pay for the whole thing.

Then they lost the players and the managers, the stars of the show they were hoping to sell around the globe so that they might grow fatter still on the profits: first Ander Herrera and James Milner and Pep Guardiola and Luke Shaw and then, in a matter of hours, dozens more, whole squads of players, breaking cover and coming out in opposition to the plan.

Atlético Madrid had, quietly, been the first to blink, contacting UEFA on Tuesday morning to start to pick a way back. A few hours later, Chelsea followed, then Manchester City became the first to say so publicly. Pérez was supposed to be making a television appearance by then; he pulled out, reportedly because he was holding meetings with his fellow rebels.

If he had tried to persuade them to hold the line, it did not work. The remaining English contingent — Liverpool, Manchester United, Tottenham and Arsenal — released nearly simultaneous statements just before 11 p.m. in Britain, confirming they were no longer involved. Only one of them, Arsenal, actually thought to apologize. Inter Milan bowed out soon after.

An hour or so later, officials were confirming that the project was dead in the water. Pérez, on Spanish television Monday night, had fretted that young people did not have the attention span for soccer anymore. His solution to that problem, it turned out, had a half-life so brief a goldfish might have followed it.

But it was not only how quickly it all dissipated — Sunday’s future of soccer did not even make it to Wednesday — but how easily those who had designed it and signed on to it seemed to capitulate. It is not just that they lost the fans, the leagues, the broadcasters and the sponsors. It is that at no point did they seem interested in even trying to win them over.

The prospect of a Super League has been the great Damoclean threat hanging over European soccer for the better part of two decades. It has been wheeled out without fail every two or three years, the trump card in each and every negotiation with UEFA — and others — to concentrate more money and more power in the hands of a select few.

And yet, in the Super League’s 48 hours of existence, only one of its architects spoke publicly: Pérez, giving an interview to “El Chiringuito,” a gaudy, late-night Spanish sports talk show, the equivalent of announcing the onset of war on the shopping channel. In a way, he deserves a little credit for that, for the willingness to own his decision.

By contrast, none of his colleagues and co-conspirators uttered a word: not to the news media, not to the fans, not even to the godfathers of their children. Andrea Agnelli, the president of Juventus, had never previously been reluctant to give voice to some of his harebrained ideas about how to improve soccer; now that he had settled on one, he did not seem quite so willing to defend it.

John Henry, Liverpool’s principal owner, has never hidden his belief that soccer needs to find ways to curb its spending, but this time he declined to make his case publicly, although he did offer an apology on Wednesday morning. Nor did the Russian plutocrat or the deputy prime minister of a Gulf state or the activist investor or the owner of a ranch the size of Los Angeles.

There was no attempt to sell the idea, no attempt to outline the benefits, as they saw them. A high-profile public relations firm in London had been hired to handle the launch, and yet as the criticism grew more voluble and more shrill and more ferocious, there was no response whatsoever, no attempt to shape a more favorable narrative.

For all the work they had done, for all the millions they had spent, for all the legal documents they had filed, nothing about this project seemed complete. The architects could not even figure out a way to make each owner produce a statement to be published by their own club explaining why they had joined the breakaway league. It was all, in some way, unserious: There was a cobbled-together website, an uninspiring logo and an American banker, but no broadcaster, no suite of sponsors and, in the end, no commitment to see any of it through.

That is hardly a propitious trait for the custodians of institutions that are, though they are run like businesses and treated as entertainment complexes, also cultural and social touchstones. If they are this disloyal to their own much-cherished ideas, imagine how worrying it would be if they were in charge of things they do not, at heart, care about at all.

And yet there is, in this whole, sorry mess, something deeply encouraging for soccer. What has given rise, in part, to the inequity the Super League was supposed to address is the need to placate this very group of owners, to meet their ever-increasing demands, to give them what they want.

They have, though, now shown their hand. They have played their card. The reaction should not be to say that enough is enough. It is to ask if, after all the horse-trading and all the plotting, after years and years of bending and shaping and cracking the game so that it suits them more, what they have eventually produced is a website, a brand name and a waterfall of acrimony and scorn that they do not even have the courage to try to stanch. Is this, really, all they have got?