The Waratahs, Rebels and Brumbies could have the last laugh this season after paying bargain-basement prices for four of the standout players in the opening round of Super Rugby.

International veterans Quade Cooper, Adam Ashley-Cooper, Karmichael Hunt and James Slipper are costing their new clubs $150,000 or less per year. All four wasted no time proving their value with commanding performances in their first outings in foreign colours. 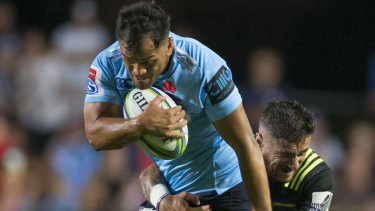 Strong carries: Karmichael Hunt impressed on debut for NSW after two years in the wilderness. Credit:AAP

The Waratahs may have snapped up the buys of the season, securing Karmichael Hunt and Adam Ashley-Cooper for one-season deals worth about $85,000 each.

Hunt is still on a $500,000-a-year deal with Rugby Australia and the Queensland Rugby Union, but his move to NSW was secured for only $85,000 and a hardline behavioural clause in his contract, with RA and the Reds continuing to stump up the balance, the Herald understands.

Ashley-Cooper, however, fresh from a three-year jaunt in French and Japanese club rugby, came home to chase a dream for little more than that. With no Rugby Australia top-up, he is back on a base contract to go after a fourth World Cup appearance.

In Melbourne, Cooper launched a career rebuild and World Cup bid with his best performance in years, guiding the Rebels around with old Reds stablemate Will Genia in the side's 34-27 win over the Brumbies on Friday night. 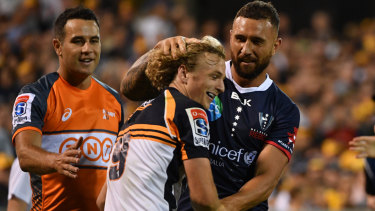 The Rebels executives who travelled to Canberra to watch the match must have been pleased, not least because his transfer from Queensland was negotiated for less than $150,000, the Herald understands. He is still collecting $650,000 per season, but the Reds continue to pay half the bill beyond his Rugby Australia component.

It was a similar scenario on the other side of the scrum on Friday, where James Slipper declared he would be discounted by no one this World Cup year with a solid first outing for the Brumbies. The Herald understands he was secured by coach Dan McKellar for a similar price, with the Reds and Brumbies splitting the difference after Rugby Australia's top up.

All four players' signatures did not come without controversy for their new clubs. The Waratahs are sensitive to accusations they are backing has-beens over young blood and Hunt’s off-field history has raised eyebrows in his new home.

Many coaches tried and failed to bring out Cooper's best over the past seven years, including Wallabies coaches Robbie Deans and Ewen McKenzie, and Reds coaches Richard Graham and Nick Stiles.

But after a year in purgatory, playing for Souths in Brisbane clubland and City in the NRC, Cooper emerged a different proposition at Canberra Stadium on Friday night, with direct running and an astute kicking game that helped Melbourne scure a valuable win away from home.

Slipper too, could have the last laugh, if he continues to prove he has emerged wiser and more determined from a battle with depression and cocaine use. With an 86-Test bank of experience to work with, Australia stands to benefit as much as the Brumbies.