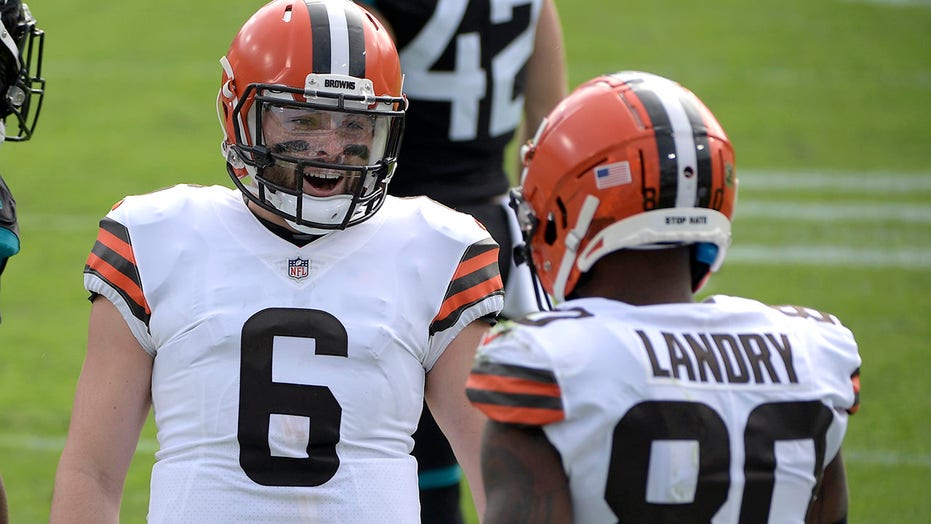 The NFL is making major coronavirus protocol changes, including team facilities shutting down for two days after games; NFL Hall of Fame quarterback Brett Favre weighs in on ‘Fox and Friends Weekend.’

Cleveland Browns quarterback Baker Mayfield had a first half to remember in the game against the AFC South-leading Tennessee Titans on Sunday afternoon.

Mayfield became the first Browns quarterback to throw four touchdowns in the first half of a game since Hall of Fame signal-caller Otto Graham did so back in 1951, the Cleveland Plain-Dealer noted.

Mayfield completed 20 of 25 passes for 290 yards and four scores to lead the Browns to a 38-7 halftime lead.

Mayfield, who completed passes to eight different receivers, tossed his fourth touchdown strike to Rashard Higgins with 5:46 to go in the second quarter.

He also had a 75-yard touchdown pass to rookie wideout Donovan Peoples-Jones, and two other scores to wide receiver Jarvis Landry and offensive lineman Kendall Lamm.

Running back Nick Chubb capped the scoring for the Browns in the first half, when he plunged into the end zone from 1-yard out to give Cleveland 38 points on the afternoon.

Mayfield has led the Browns to their best record since 2007. He's thrown for 2,108 yards and 17 touchdown passes.