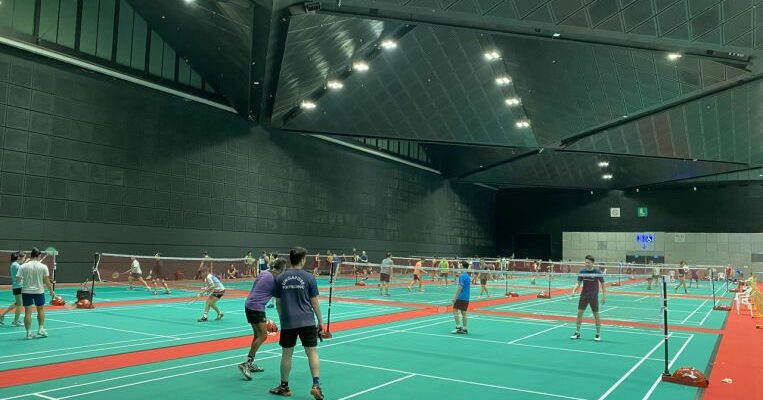 SINGAPORE – Avid badminton player Jiten Khemlani used to wake up at the crack of dawn just to book a court, which are released on ActiveSG’s website at 7am two weeks in advance.

But the IT solutions consultant no longer has to “camp” to make the bookings as over 40 new badminton courts have opened at the Singapore Expo Convention & Exhibition Centre and the Suntec Convention Centre.

The 32-year-old secured at least one slot a week recently at one of the 22 courts at the Singapore Badminton Hall @ Expo, where he has played at least 10 times.

There are also 20 courts at Teamsport Arena @ Suntec.

He said: “The courts (at Expo) are newer and cleaner (than the ones at ActiveSG). The surface is good because it’s easier to move around and you won’t slip and fall easily.

“It’s good that these courts have opened because it gives people more chances to play badminton since the other courts are so hard to book.”

Richard Tan, chief executive of Arina Holdings which runs the facility, said an average of 60 per cent of slots are now booked daily since it opened in September.

He has signed a one-year lease for the location but hopes to keep the courts there for a longer period of time.

Tan, 59, said: “It’s a win-win kind of collaboration because without events, the area is very dead and now with more people coming, it helps the businesses in the area and people get to enjoy more badminton courts.

“There’s also a better utilisation of my workers and materials.”

A spokesman from events firm Constellar, which manages Singapore Expo, said: “Badminton has always been a popular sport in Singapore and demand for courts has risen during the pandemic as more people seek out recreation options locally.

“We saw an opportunity for the Singapore Expo to cater to the needs of badminton fans and recreation seekers through this offering, elevating the experience with low-impact timber flooring, non-slip mats and individually-lit courts to simulate tournament lighting.”

While courts at the convention centres are priced slightly higher than those at ActiveSG sports halls ($3.50 to $9.70 an hour) or the OCBC Arena ($5 to $13 an hour), that has not stopped players from getting their weekly badminton fix.

When The Straits Times visited the Singapore Badminton Hall @ Expo on a weekday night, eight courts were being used at 7pm but an hour later, all were full.

Similarly at Teamsport Arena @ Suntec on a weekday night, all the courts in halls 601/602 were fully utilised from 8pm onwards.

Teamsport Singapore founder Toon Ong added that the place is always full at peak hours while it is 70 per cent booked in the afternoons, with mornings being the quietest.

Business undergraduate Darren Tan, 25, who played at Teamsport Arena @ Suntec for the first time recently, said he and his friends were initially put off by the high price point but decided to give it a shot.

“We had no choice. It’s really hard to book courts (at ActiveSG sports halls) and even if we get them, we have to wait for two months,” said the final-year Singapore Management University student, who was playing badminton for the first time in a year.

“My friends and I really enjoyed playing there. It beats other courts because sports halls are usually dusty and kind of stuffy. So this place with air conditioning is a bonus.

“We might still come once in a while but honestly, the price is really a concern.”

Ong, 32, acknowledged that the price at his facility is higher but noted that his courts will help meet the high demand for badminton courts in Singapore.

“It’s a challenge to book courts here and all the snatching and re-selling of courts is not ideal. We want to be inclusive and open to the public.

“If you split it by the number of players who come, it’s still affordable. And looking at the quality of play… you’re able to play 80-90 per cent of the time because it’s an air-conditioned venue so you’re actually playing more.”

He selected the Suntec Convention Centre as a venue because of its central location and high ceilings in the halls. His start-up cost is a six-figure sum including renovations and setting up while his lease is also renewed on a year-to-year basis.

A Suntec Singapore spokesman said: “We are delighted to be selected as the venue for the Teamsport Badminton courts.”

Beyond providing Singaporeans with more playing facilities, Ong also hopes to bring more badminton enthusiasts into his space through the company-run Meetup group and organising tournaments for players of different levels.

If all goes well, he is also looking to set up more courts in other areas of Singapore and venture into other sports such as table tennis, fencing and mixed martial arts.

Serge Divino, who returned to the court at Singapore Expo after taking a two-month break, hopes the courts will remain so players have more options.

The 42-year-old, who works in IT, noted that the operators even took players’ feedback into consideration, with the lights there brighter than when he first visited in September.

He added: “We don’t have to camp for slots here. There are more options to play now and you can play more. It also helps other people who want to play because they might be stressed after work or during the pandemic, they just want to exercise.

“The cost is a bit higher but I’m a badminton addict and I really miss playing so this is a good alternative.”

Nicholas Mak, head of research and consultancy at ERA Realty, said operating such sports facilities in exhibition halls is a creative use of space that is under-utilised during the pandemic and can see this continuing as long as the pandemic restricts the use of exhibition halls for conventions and major meetings.

He said: “Covid-19 restrictions still prevent people from gathering in large numbers. Looking at badminton, it’s not like football or basketball where people are in close contact. They’re still spaced apart and you can space different sets of players further apart because the convention area volume is very high.

“It might not be as profitable as holding exhibitions. (But this) allows them to switch back to a convention hall quite quickly if space is needed and they don’t have to spend a lot of money or energy.”

He also felt it was a win-win situation, explaining: “It’s a kind of service to the community to allow people to exercise in relative comfort.

“(And) there might also be a positive spillover effect because the courts attract people to the place itself and could result in additional business for surrounding shops and restaurants.”