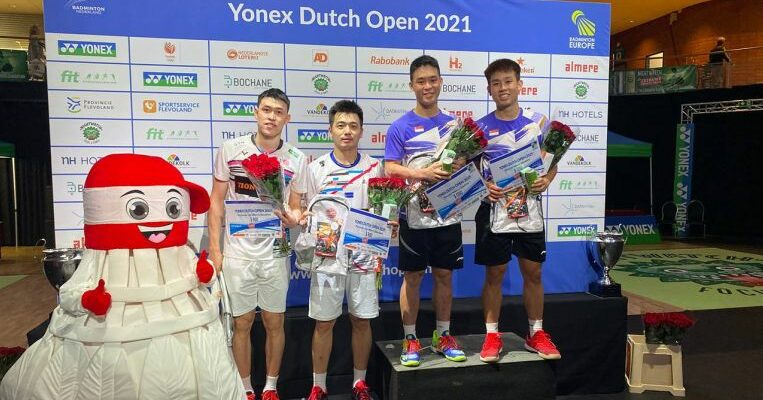 Kean Hean, 26, said: “It feels amazing. Since Kean Yew has been travelling a lot, we rarely spend time together. So being able to play in the same tournament and end up winning our respective events is a great feeling.”

The world No. 190 duo – both Penang-born – have been partners for close to five years and their chemistry showed against a new Malaysian pairing, even if it did boast of Wee Kiong, who won the Rio 2016 men’s doubles silver with Goh V Shem.

Singapore Badminton Association technical director Martin Andrew said of Kean Hean and Hee: “They both have good movement so they cover the court well, they have good front and mid-court skills which can make them difficult to break down by opponents.”

And so it proved in the deciding game. Nearing the finish line, the Malaysians had done well to keep and expand their lead to 19-16, and even had a matchpoint at 20-19. But the Singaporeans battled back for a morale-boosting win, their second in the partnership.

Kean Hean said: “We were very focused on our strategy of being more offensive and keeping the shuttlecock down and didn’t really put a lot of thought into the score. I felt this made a difference psychologically.”

The win was also a testament of Hee’s fitness as the 26-year-old also reached the mixed doubles semi-final with Tan Wei Han, which meant he played four matches – two quarter-finals and two semi-finals on Saturday.

He said: “Playing four times a day was tough and sadly I lost the mixed doubles in the semis, but physically I feel fine.

“This was our first tournament in two years because of the pandemic, so I was just focused on enjoying the game and fighting for every point, and I was not actively conscious about winning or losing during the matches. The Malaysians are very good players, and the pressure was on them, so we had to fight throughout the game and it paid off.

“Moving forward, the key is a good recovery process and preparation for our next event.”

With the Singaporean pair showing good form – they had beaten Scotland’s world No. 36 Alexander Dunn and Adam Hall 21-17, 21-18 in the quarter-final – Andrew is backing them to climb up the world rankings and is not ruling out a 2024 Paris Olympics push.

The Englishman said: “Their level is good but they need to gain greater tournament experience as this is really difficult to simulate in a training environment.

“This is a good result which shows that they can compete at higher levels. What was pleasing is that they performed well and got stuck in when things weren’t going so well, and stayed strong when scores were close, which is difficult when you’re not used to competing.”

They will get the opportunity to build on their momentum as they are scheduled to play in the Oct 21-24 Czech Open and Oct 27-30 Belgian International next.