The first rule of launching something brand new is talk a big game. And then back it up.

For months they've spoken about warp speeds on water, the fastest crafts in the world. They've openly spoken about the prospect of F50s that can nudge speeds of 100 kilometres an hour flying headfirst towards each other, the ultimate cat-and-mouse game daring the other crew to blink first. They've promised the best harbours in the world: Sydney, San Fran, New York and Marseille. 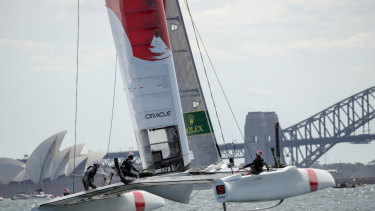 But punches? In sailing?

"As soon as someone does something pretty marginal I think the friendships will go to one side and there will be some punch-ups in the yard," New Zealand-born Chinese helm Phil Robertson told Yachting New Zealand in the lead-up to the inaugural SailGP series.

"I wouldn't be surprised if someone took a swing at someone else."

It might have been bluster to pump up the boating world and help trumpet the new Formula One on water designed to shake up the America's Cup, but it sort of worked.

Robertson is a little Kiwi who would be fighting a few divisions out of his weight range, regardless of who his target was.

And for a few moments on Saturday, the second and final day of the opening leg of the series in Sydney Harbour, you started imagining Robertson sizing up Australian Olympic gold medallist Tom Slingsby on the deck below the posh Royal Sydney Yacht Squadron, a stone's throw from Kirribilli House.

During the last race of the first regatta, his enigmatic Chinese crew puffed their chests out, pinned their shoulders back and hurtled towards the hi tech catamaran with a green and gold boxing kangaroo on its sail. Twice.

How they avoided each other – and the bout that may have ensued back on dry land – is anyone's guess. But it's what makes sailing's revolutionary series watchable.

"We’re packing ourselves, but thankfully it wasn’t too windy for the first event," Robertson said. "As soon as the gun goes … everyone is going to get their horns out and try to beat up on each other.

"We got the boats pretty close at times, but that’s what we do. We’re lucky we’ve got lots of skilled people around to push the boats that close."

While across the harbour and down the road a racehorse called Winx kept winning, so did Australia's SailGP pioneers. You could argue they were as dominant as the equine freak, maybe even more so.

And then in the final match race with Japan, led by Slingsby's compatriot and fellow London Olympic gold medallist Nathan Outteridge, the Australians cruised home 37 seconds ahead. They finished the Sydney leg on 48 points, taking a three-point lead over Japan (45), Great Britain (36), China (33), France (33) and the United States (31).

Slingsby and Outteridge – signed up to be Japan's helm before they eventually transition to a crew of wholly homegrown sailors – have traded cheeky verbal barbs all week. Only one man had the last laugh.

Asked whether his crew now had a target on their back, Slingsby said: "Yeah, but it doesn’t worry me. If we can lead from the front we will.

"We hold ourselves to a very high standard and we put more pressure on ourselves than anyone else could. We expect to win and if we don’t win or had have come second here I would have been blowing up at the crew and blowing up at myself."

Added Outteridge: "We don’t need more than a rivalry than we already have, [but] I was really impressed how well they sailed today."

The first SailGP series was watched by thousands of fans which crammed Shark Island and registered boats which rocked on the perimeter of the course.

Will they be back again next year? The cheeky Kiwi navigating the China boat will do his best to ensure they are.