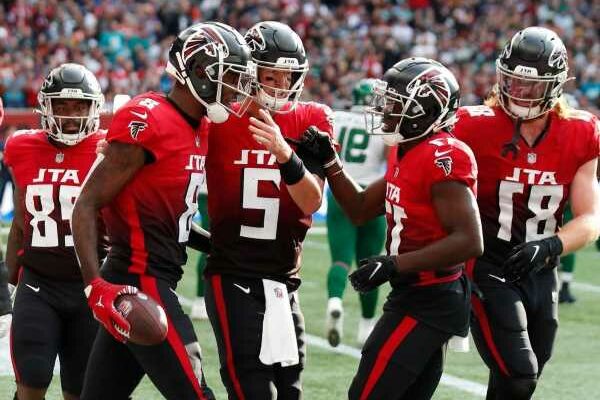 Kyle Pitts starred as the Falcons beat the Jets

For the last 14 years the NFL has been welcomed with open arms in the UK. The games themselves though haven’t always delivered.

The London crowds have been served some regretfully poor fare over the years with below-par matchups or uncompetitive blowouts an all too regular occurrence.

A pair of spluttering one-win teams squaring off didn’t offer a lot of hope for much different this time around but the Atlanta Falcons and New York Jets went toe to toe nonetheless in a game that while not a thriller by any stretch still went down to the wire, the Falcons emerging victorious 27-20.

The league’s international series was put on ice by the pandemic a year ago meaning the more than 60,000 in attendance at the Tottenham Hotspur Stadium were even more excited as American football made its long-awaited return to the UK for a 29th regular season game held on these shores, the first since November 2019.

Fans on this side of the pond have always shown boisterous support of the sport at both Wembley and Twickenham, but here at Tottenham, in a stadium purpose built for just this sort of occasion, the NFL feels more at home than ever. If it is to truly to put down roots in this country, as is the long-term plan, then this is where they will grow.

Broadway star Marisha Wallace set the tone for a razzamatazz afternoon, belting out The Star Spangled Banner from the roof high above the pitch before jet planes greeted red, white and blue fireworks as this week five showdown started with a bang. 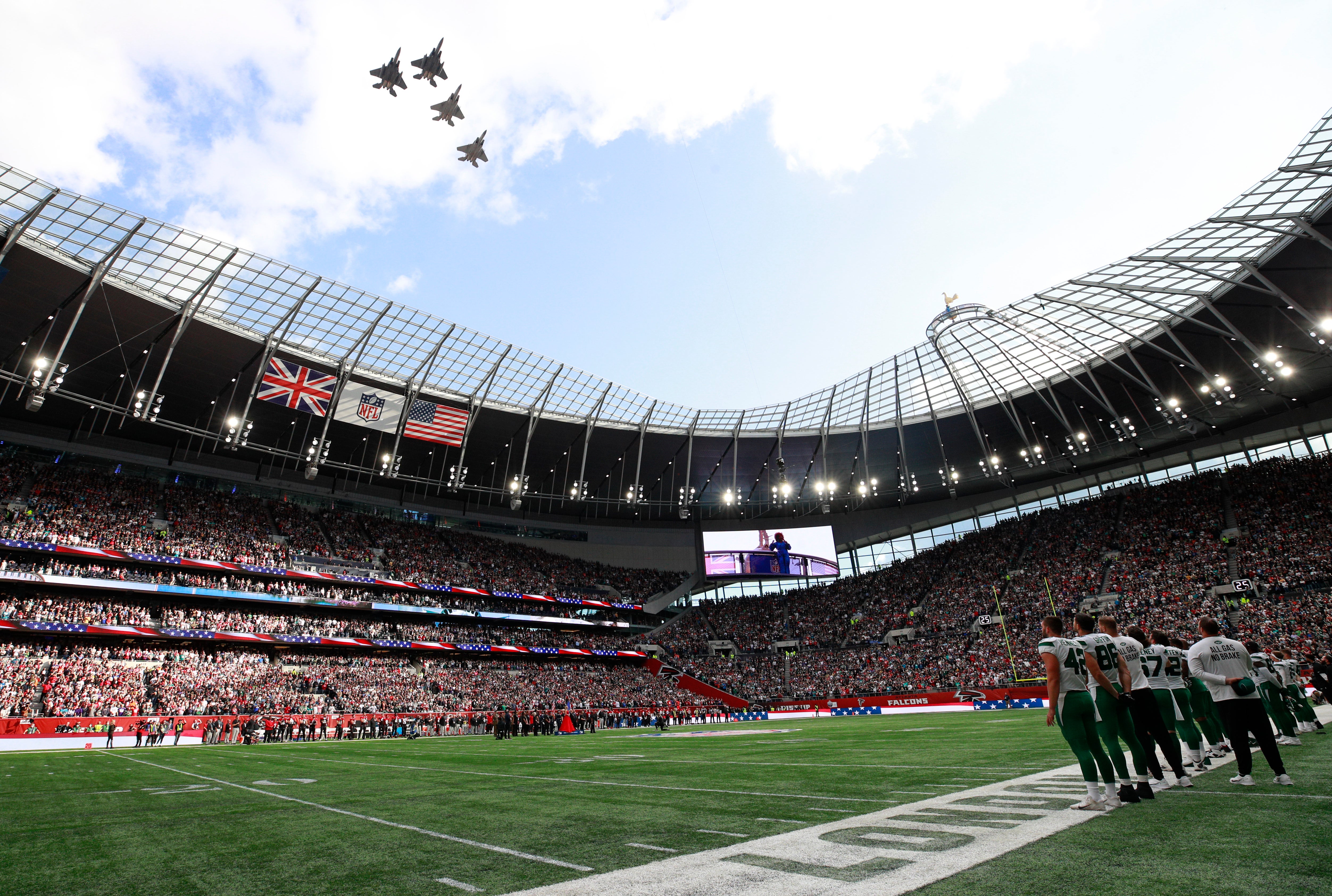 The NFL returned to London on Sunday

On the field it was far more of a slow burn. With the two teams already boasting losing records in this young season it was always likely to be that way but Atlanta quarterback Matt Ryan had other ideas.

Short-handed with his top two receivers Calvin Ridley and Russell Gage not making the trip over the Atlantic, he was forced to lean on his secondary options with an opening 14 play, near seven-minute opening possession seeing early-season surprise package Cordarrelle Patterson used both on the ground and through the air. Younghoe Koo’s routine field goal was good from close range to give the Falcons the lead.

It was far more difficult for opposite number Zach Wilson. The first-round rookie had showed signs of his pre-draft promise in the overtime win over Tennessee a week ago but struggled in this one, an ineffective three-and-out first possession emblematic of a tough afternoon for the former BYU man. 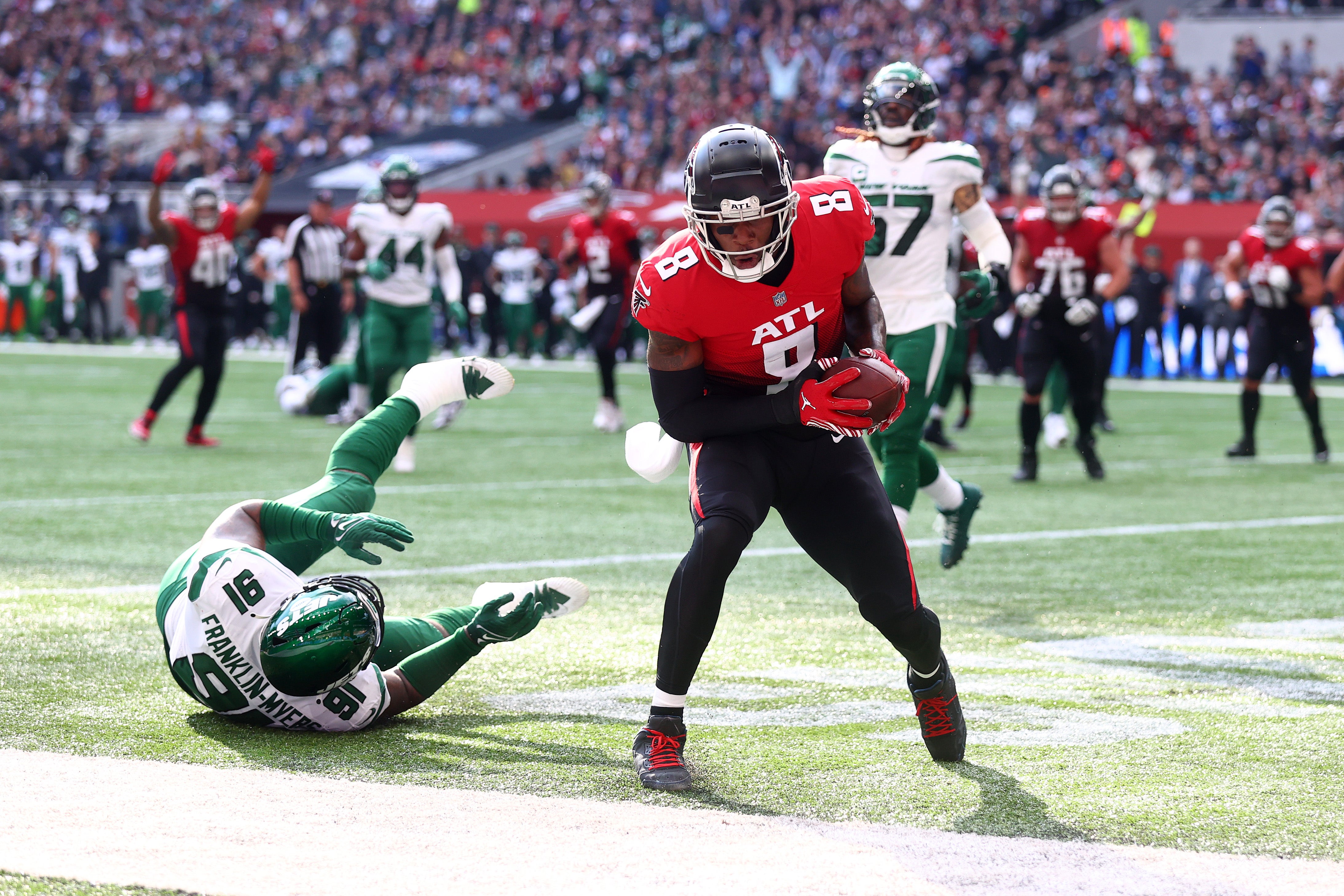 A fellow top pick was enjoying a far more productive day, however. Much was expected of Kyle Pitts when the Falcons took him fourth overall in April’s draft after a standout collegiate career. Atlanta though had struggled to get him involved in the season’s early slate but with No 1 wide receiver Ridley missing here Ryan went to him early and often. A long grab on the second possession set up the Falcons in the red zone before Ryan again looked his way, Pitts snagging a fade in the end zone for a first career score.

More than 14 minutes of the first quarter had passed before Wilson completed his first pass. Ryan had completed nine in that time. The time of possession advantage was nine minutes. Atlanta had 10 first downs to New York’s none.

Another NYJ possession came and went before a 22-yard rip from Ryan to Pitts, who hauled it in with one hand, marched the Falcons downfield. The highlight-reel catch, the exact kind of play you draft a tight end so high to make, set up Atlanta with great field position again. A 17-yard touchdown toss over the middle to a wide open Hayden Hurst from inside the red zone followed as Atlanta’s advantage widened.

It would go from bad to worse for Wilson, whose errant deep pass intended for Keelan Cole was picked off by Jaylinn Hawkins, a ninth interception in just four and a bit games of his pro career.

Staring down the barrel at 17-0 the Jets defence finally showed some life, linebacker CJ Mosley ripping the ball loose from Hurst, cornerback Michael Carter recovering it before Wilson, in dire need of something, at last got Corey Davis and Jamison Crowder involved for gains of 14 and 13 on the ensuing drive with Michael Carter also finding some much-needed running room. The drive would stall in the red zone however, with kicker Matt Ammendola getting New York on the board with his leg.

There remained time on the clock for Ryan though and again utilising Pitts as well as getting help from an indisciplined Jet defence got Atlanta in range for Koo, who was good from 52 to make it 20-3 at the half.

The Jets needed a spark and they got it with the very first play of the second half with returner Tevin Coleman taking the kick-off 65 yards back into Falcon territory. Ty Johnson crashed in from close in to reduce the deficit to 11 after Ammendola doinked the extra point.

Kyle Pitts starred for the Falcons

Wilson authored a second-half comeback against the Titans a week ago and it was on again. The two sides exchanged possessions before Carter, helped by a 41-yard pass interference penalty that placed the ball at the two, somersaulted in. The successful two-point conversion made it 20-17 and the capacity crowd, in something of a Sunday afternoon snooze after the early Falcon lead, were reignited.

Veteran Ryan has been here before of course and with clock to burn and a win to see out went back to Pitts, a 39-yard grab taking some of the air out of a crowd who had hoped for a grandstand finish. Mike Davis’ three-yard touchdown plunge just before the two-minute warning extinguished any lingering thoughts of a Jet comeback.

The Falcons move to 2-3 and back into the race in the NFC South while the Jets head home 1-4 with plenty of work to do to stay relevant in the AFC East.

The hope is for more competitive games on UK soil, hopefully continuing when the Jacksonville Jaguars host the Miami Dolphins at the same venue next weekend, but close contests or not, the NFL is here to stay. A game in Germany is next in the offing as the league continues its expansion on to the continent. At Tottenham it already has its home.