London welcomes one of the NFL’s most tormented franchises this week in the Atlanta Falcons, who have routinely suffered crushing defeats from unfathomable positions.

And while the New York Jets have endured their own misery, there is something more cruel when fans experience hope.

Four years removed from a scarcely believable collapse against the New England Patriots in the Super Bowl, the Falcons have reloaded under Arthur Smith.

Despite being the son of FedEx owner Frederick W. Smith, this football visionary has grafted in pursuit of his own recognition and now has his chance.

A beautiful balance between run and pass saw the imposing Derrick Henry seemingly grow in stature as the game developed under Smith. But the Falcons’ defense has been feeble, giving up a league-worst 32 points per game through four weeks. It has led to a 1-3 record, heaping more pressure on Smith to find a magic potion on offense despite lacking a dominant running back and the ominous signs of Matt Ryan’s deterioration behind centre.

But in the first of two games at Tottenham Hotspur Stadium, a fascinating battle awaits between two exciting young coaches who specialise on opposite sides of the ball.

Greeting Smith on the opposite side of the touchline will be Robert Saleh and his frisky New York Jets, who arrive in the capital with a skip in their step following their first victory of the new regime, 27-24 over the Titans, a crucial moment for rookie quarterback Zack Wilson, taken second overall in this year’s draft.

“The question over Arthur Smith when he came in was if he could get this offense together and do what he did in Tennessee,” Jason Bell says. “Creative play designs, run the ball off play action.

“He was excited when he got Matt Ryan, despite everybody talking about getting another quarterback [with the fourth overall pick, which was eventually used to draft generational tight end Kyle Pitts]. 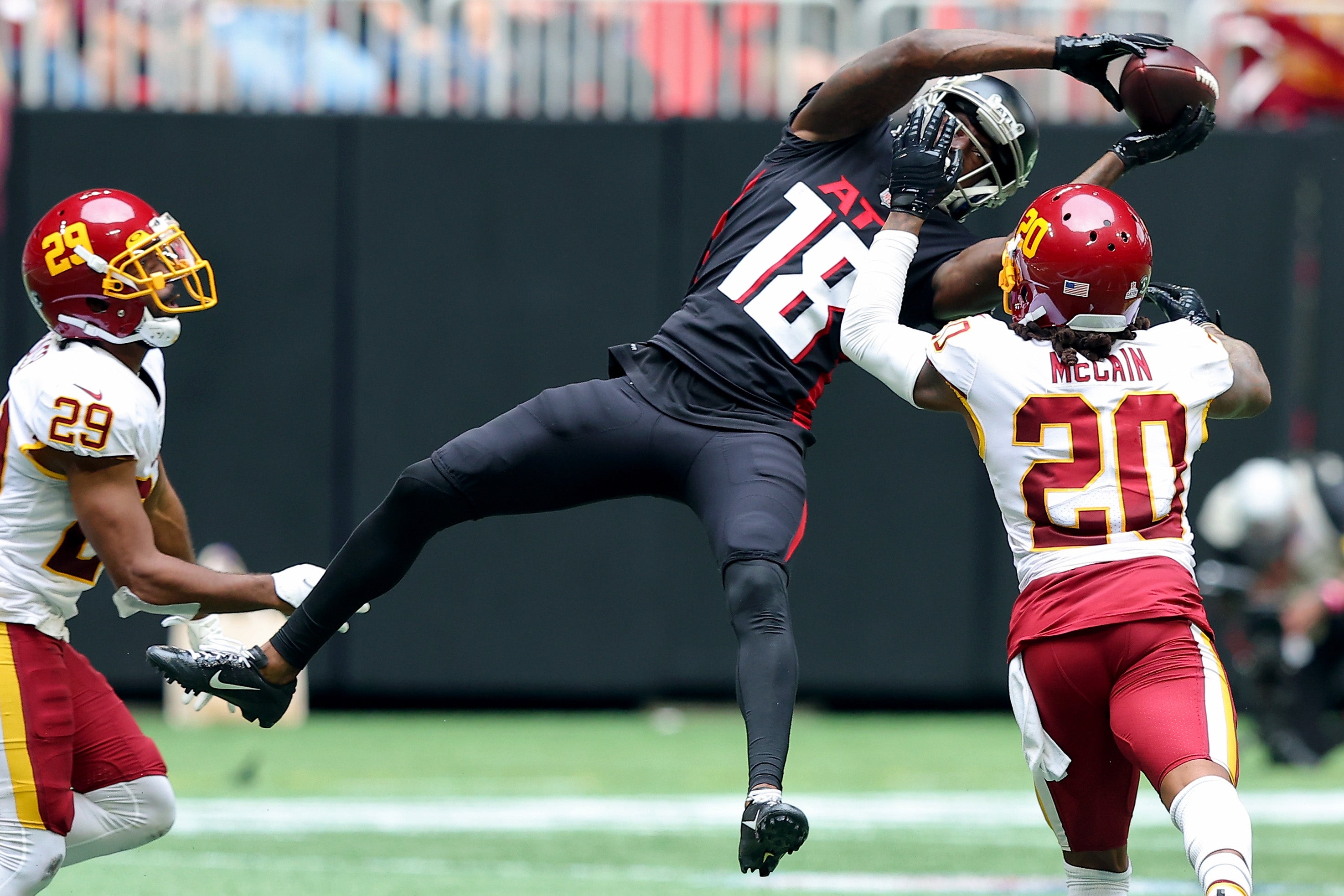 Calvin Ridley will be unavailable for the Falcons in London

“You can see what he is doing with Cordarrelle Patterson [who grabbed three touchdowns in the air against Washington last week]. When you have a weapon like him, dispersing him in the ways that they have shows they have creativity.

“They will put up points, but their problem is defense, that’s what they will have to show in London against the Jets.”

Saleh rose to prominence with his fiery touchline antics as the San Francisco 49ers tormented offenses two years ago on their way to the Super Bowl.

That Niners defense mentally broke opponents behind their measly pass defense, allowing a league-best 169.2 yards per game in 2019. However, after an injury-ravaged season, Saleh and head coach Kyle Shanahan parted ways.

The bar is low in New York, with the Jets merely craving relevance, if not the faintest of hints that a play-off run is possible down the line, given the team has the ignominy of the longest drought in the league at 10 seasons.

But there are already flashes on defence, with linebacker CJ Mosley and defensive tackle Quinnen Williams, acquired with the third overall pick in the 2019 draft, among those who clattered into Ryan Tannehill at MetLife Stadium last week, totalling seven sacks. 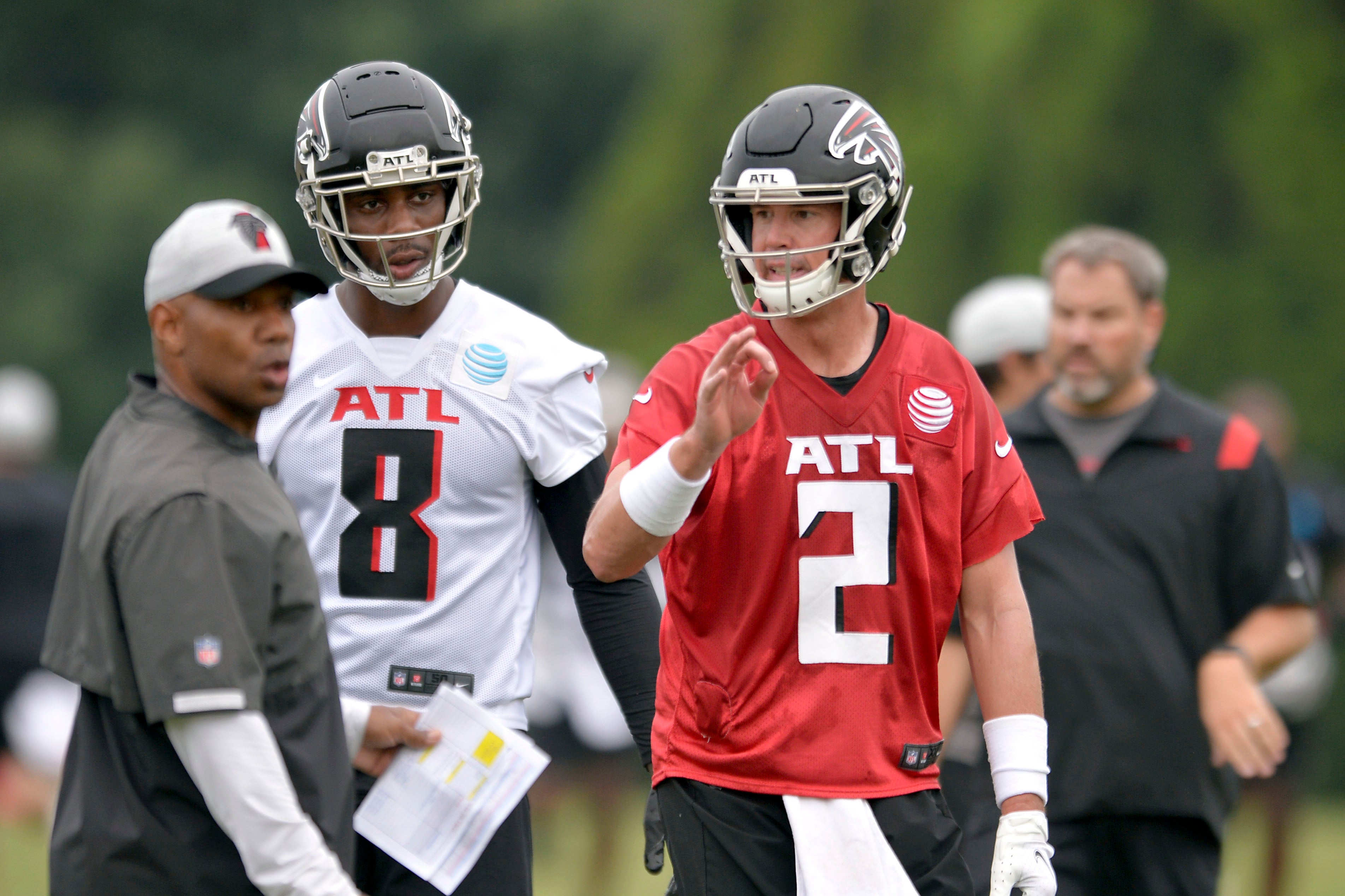 It provides the tantalising prospect as to how Smith will scheme up solutions to this frisky pass rush in order to protect the ponderous Ryan. And while Patterson has proven to be a revelation as a gadget player, Falcons fans are still patiently waiting to see their most formidable weapons Ridley, who has not made the trip due to a personal matter, and Pitts ignite under Smith.

This is why Smith was acquired, to conjure up an irresistible force on offense, with former Giants defensive end Osi Umenyiora brimming with excitement at who comes out on top on Sunday.

“It should be a great game, the way the Jets defense played last week, they really got after the quarterback,” Umenyiora points out.

“The Atlanta offense has been performing at a pretty high level. Kyle Pitts, will he continue to emerge as a dominant force, let’s see what Patterson can do, Calvin Ridley in his short career has already developed into one of the best wide receivers in football. This match-up between this offense and the New York defense, led by Robert Saleh, that’s what I’m most excited to watch.”