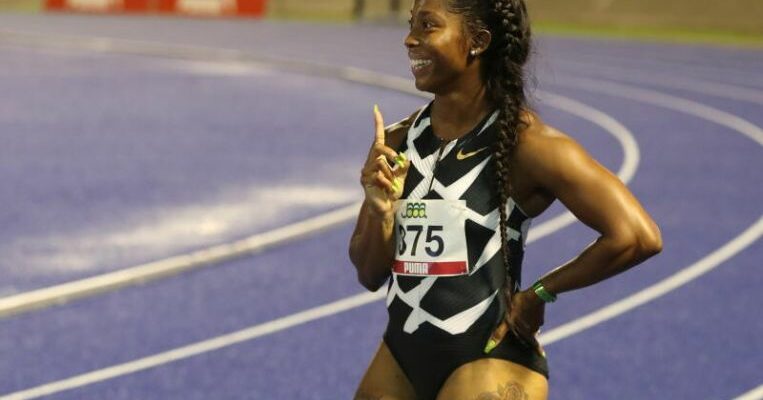 KINGSTON (REUTERS) – Shelly-Ann Fraser-Pryce signalled her intention to vie for an elusive sprint double at the Tokyo Olympics next month with a career-best 21.79 seconds in the 200 metres on Sunday (June 27) to add to her 100m victory as the Jamaican Trials came to a close.

Running in lane four, the four-time world 100m champion overtook her main rivals Elaine Thompson-Herah and Shericka Jackson by the 60m mark before powering away to beat her previous career best of 22.09 seconds, recorded when she took silver at the 2012 London Olympics.

The fastest woman alive, who recorded 10.63 seconds in the 100m three weeks ago, told Reuters she was pleased to finally dip below the 22-second barrier.

“I never ever doubted myself because everything has to do with time and being patient and allowing grace to lead the way,” she said.

“I’m just elated that I was finally able to break the 22 seconds.” Fraser-Pryce is now ranked 20th fastest all-time over the half-lap event and sixth best among Jamaicans.

Former Commonwealth Games gold medallist Rasheed Dwyer caught the fast-starting Yohan Blake in the last 20 metres to win the men’s equivalent in 20.17 seconds. Blake came second in 20.18, ahead of Tyquendo Tracey who clocked 20.34.

Damion Thomas sped to a lifetime-best 14.11 for second ahead of London 2012 Olympic bronze medallist Hansle Parchment with a season-best 13.16.

Levy said things were finally coming together for him after surgery on stress fractures on both legs in the summer of 2019.

“I had to sit out all of 2020, so when 2021 came I just tried to push my body with constant physiotherapy and treatment to my shins, everything came along smoothly,” Levy told Reuters.

“I know based on what my coaches are telling me, I’m capable of faster times, so I’m just trusting the process and continue to work hard,” he said.

The women’s equivalent went to Megan Tapper recovered from a poor start to claw her way back in the last six hurdles to win in a season-best 12.68 seconds to beat a stacked field while running in lane eight.

“I knew the shape I was in based on a time trial I did two weeks ago, so I was expecting to run 48 seconds, but I’m heading back to training for it and hopefully it will come (at the Olympics),” McPherson told Reuters.

Candice McLeod and Roniesha McGregor also posted lifetime bests of 49.91 and 50.02 respectively to book their tickets to Tokyo.

The men’s equivalent went to Sean Bailey in 45.04 seconds ahead of Christopher Taylor in 45.13 and Karayme Bartley in 45.17.