AUGUSTA, Ga. — The Masters is the major that Jason Day has dreamed of winning since he turned to golf as a teenager to escape an almost certain future working in a meatpacking plant in his native Australia. Day had to be plenty tough to overcome his impoverished beginnings, so it is strange that he has become known on the PGA Tour for his fragility.

Day has scaled the men’s world rankings, but he has also faced the depths of discomfort in the majors. Sometimes he has managed the pain, sometimes not. He withdrew during the second round of the 2012 Masters because of an ankle injury, but soldiered on at the 2015 United States Open despite having vertigo, tying for ninth. He has played through a variety of aches, pains and illnesses, and he won the 2015 P.G.A. Championship. Then for a few frightening minutes this week, it seemed as if Day’s Masters destiny would be another painful WD.

Shortly before he made his ninth start at Augusta National, Day leaned down to kiss his toddler daughter and tweaked his back. He has felt pain in the area all year, and on the second hole on Thursday, he had to have his back worked on by his chiropractor before he could continue.

At that point, his goal of winning the Masters gave way to merely trying to complete 18 holes. And yet, somehow, some way, Day not only survived, he thrived. After 36 holes, he is tied for the lead at seven under par. It turns out, he was so focused on his back, his ambition to win was pushed to the back of his mind, freeing him to post scores of two-under 70 and a second-round 67.

“Augusta National, the Masters, everything that goes on this week, how big it is, and the distraction of wanting to win this tournament so bad, and sometimes it is almost a blessing in disguise,” Day said, referring to his injury. “It just brings down the expectations of going out there and trying too hard.” 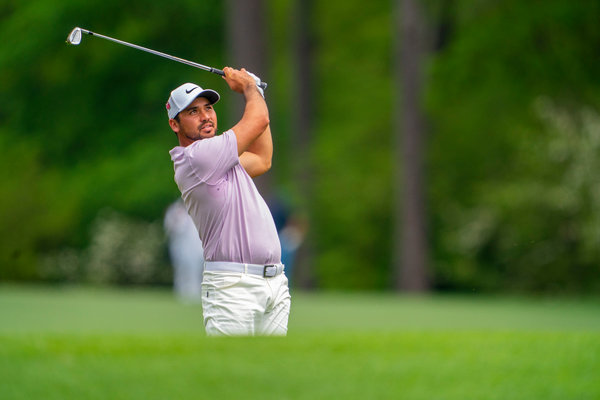 People behind the ropes mutter, even at the Masters, where the rules of decorum are included in the spectator guide. Day’s mother, Dening, who made the trip from Australia to watch him play, followed him during the first round. She decided to stay behind in her room and watch Friday’s action on television, in part because it upset her to hear patrons calling her son a big baby and the like.

Day has learned to turn a deaf ear to the naysayers. Last month, Day’s lower back flared up with pain at the Arnold Palmer Invitational, where he is a former champion, causing him to withdraw a few holes into his first round.

Day and his wife, Ellie, took their three young children to Disney World the next day, and a family photograph ended up on social media. That drew criticism from people who wondered how he could pull out of a golf tournament one day, only to show up at an amusement park the next.

Day said later that he didn’t go on any rides but walked around the park to loosen his back, with the blessing of his doctors. Speaking before his next start, the Players Championship, where he tied for eighth, Day explained why he ignored the opinions of those outside his inner circle.

If he allows himself to be drawn into reacting, he said, “You don’t gain anything from it, other than it makes you look sour or angry or bitter.”

Day does listen to his wife of 10 years. He woke up on Friday in the recreational vehicle that is their house on wheels and was moping because his back felt sore. His wife told him that this was the Masters and that he needed to tough it out mentally.

Her words stung, but only for a second. Then he performed a mental reboot, because of course his wife was right. And she walks the walk; Ellie Day covered all 18 holes of his first round on foot after slipping and bruising her arm and leg during Wednesday’s par-3 contest.

“She’s birthed three children and I haven’t, so she’s a lot stronger as a person than me with regards to pain,” Day said with a laugh, adding, “She was trying to get me ready for today, and it ultimately did.”

Day had more work on his back before he hit the practice range and felt good to go. He birdied all four par 5s in his six-birdie, one-bogey round. He was powered by grit, but also by anti-inflammatory pills.

Day, 31, acknowledged that he also has taken several cortisone shots this year to be able to play. They are short-term solutions that don’t address the problem of his chronic back injury.

In a season as compressed as this one, with majors lined up like private aircraft flying into the Augusta Regional airport this week, Day doesn’t consider rest an option. April is the Masters, May is the P.G.A. Championship, June is the United States Open, and July brings the British Open. And on Friday, he said surgery was not an option.

“I want to stay away from that as much as possible,” Day said. “Once you cut yourself, you can’t undo what you’ve done in there.”

For Day, the key this weekend is continuing to play as if the outcome didn’t matter — as he did Thursday when finishing 18 holes was his only goal.

“I’m hoping that I can take the same attitude, even though I feel pretty healthy now,” he said.