With a couple of minutes to play in Budapest, the French midfielder Adrien Rabiot looked squarely at Sergio Oliveira, his Portuguese opponent, and advised him to back away. Like everyone else in the stadium, Rabiot had heard the news. The group stage of Euro 2020 was effectively over. Both France and Portugal were through to the knockout rounds. There was no need to run or to chase or to press. Now was the time for watching the clock.

It had not, for either team, been a straightforward evening. The game had oscillated — Portugal led, then France, then Portugal struck back — and so had their fates, dependent to some extent on the outcome of the group’s other game, between Germany and Hungary in Munich. At one point or another, each of the four teams had believed they were going through.

Only once Leon Goretzka had secured Germany a point against Hungary was it all settled. Hungary would be the fall guy; the three favorites all had safe passage to a round of 16 that offers a suite of intriguing encounters and two particularly mouthwatering ones: Portugal’s encounter with Belgium in Seville on Sunday, and England’s welcoming Germany to London on Tuesday.

The jostling for position is, now, at an end. The real business starts here. 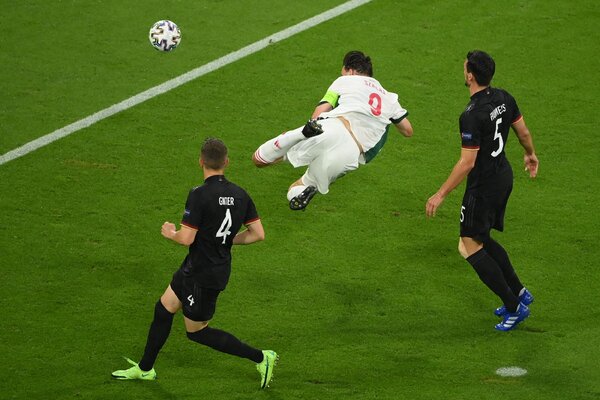 Don’t Be Fooled: France Is the Favorite

The reigning world champion, France, may not have sailed through its group with quite the ease of some of its challengers — Belgium, the Netherlands and Italy all posted perfect records — but that does not quite tell the whole story.

The caliber of its opponent, first and foremost, was notably higher: France dropped points to Portugal, the defending European champion, and a Hungary team — one good enough to come within a whisker of beating Germany — roared on by a fiercely partisan home crowd.

Just as significant, particularly in its final game, France managed to give the impression that it has more to offer as and when necessary. Whenever Rabiot, Paul Pogba and the rest needed to lift the rhythm, they did so seamlessly. It is probably worth noting, too, that Kylian Mbappé has not scored yet, a ceasefire that will not hold forever.

Nor, as yet, has an obvious contender emerged to France’s air of superiority. Germany, Portugal, Belgium, England and Spain — the group of teams that would expect to profit from any slight hesitation on the part of France — have yet to hit their stride. The teams that have impressed, Italy and the Netherlands, seem a little too young or a little too fragile to last the course. This is still France’s tournament to lose.

Roberto Mancini has his wish. On the eve of Euro 2020, Mancini, Italy’s coach, declared that he wanted his team to win over a public scarred by a decade of disappointment by “having fun.” His players have duly delivered.

Italy has won all three group games. It has played thrilling, inventive soccer, backed by a raucous and partisan crowd in Rome. It is — despite relatively stiff competition from the Netherlands — the most compelling team in the tournament, the one that it is most rewarding to watch. It is also yet to concede a goal, because deep down, it is still Italy.

That early promise is no guarantee of later success, of course. Every European Championships has a side that wins hearts and minds early on — the Czech Republic in 2004, the Netherlands in 2008 and Italy in 2016 — only to fall as soon as the level of difficulty ratchets up.

Mancini’s team should have enough to breeze past Austria in the first knockout round, but Belgium, its most probable opponent in the quarterfinal, would provide a sterner test. Those two sides are an intriguing contrast: more than any team, Italy benefited from the postponement of this tournament. The yearlong delay because of the pandemic granted Mancini’s young side invaluable experience. It may have proved too callow had the competition been held, as scheduled, in 2020.

The converse is true of Belgium. Roberto Martínez’s team also has won all its games, but it has done so with none of the verve or panache that has marked Italy’s progress. Belgium slumbered past Russia. It played in fits and starts to see off a spirited Denmark, and then roused itself late to swat aside Finland. Belgium is the world’s top-ranked team, but it also has the oldest squad in the tournament. It has the air of a team whose moment has just passed. Italy’s, you sense, is yet to come.

Some Roads Are Easier Than Others

Nobody is under any illusions that the current format for the European Championship is perfect. It is cumbersome and it is unwieldy and it is, at times, unsatisfactorily inconclusive. Switzerland won on Sunday night, but only knew the meaning of its victory on Monday. Ukraine lost on Monday, but had to wait until Wednesday to discover its fate.

But that is not to say that the tension does not have its benefits. Only one of the final round of games — the Netherlands’ win against North Macedonia — was devoid of it; the Dutch had already won their group, and their guest in Amsterdam had already been eliminated. The 11 remaining matches all had something riding on them, whether that was settling the matter of who won the group or identifying which teams would qualify for the knockouts.

That balance between benefit and drawback continues in the round of 16. On Saturday, Wales faces Denmark in Amsterdam. Both finished as the runner-up in their groups. But so did Austria, and it must play Italy.

The need to squeeze in two games in the round of 16 between second-placed teams, to make the whole format work, has the effect of unbalancing the draw. That has been mitigated a little this time by the fact that Spain could not top its group, thanks to Sweden’s late winner against Poland, and will face Croatia in Copenhagen. But the consequence is clear: Some teams have a much more challenging route to the final than others.

On one side of the draw, for example, Belgium must first face Portugal, then endure a potential quarterfinal with France, before meeting Spain — perhaps — in a semifinal. On the other, both England and Germany have cause to curse a difficult first knockout round matchup, but the prize for winning is a rich one: a quarterfinal against Sweden or Croatia, and then most likely the Netherlands in the semifinals.

An uneven draw is not necessarily a bad thing. It means there is a route to the latter stages for nations that would, in other formats, expect to be dispatched far earlier. That is to be welcomed. A little randomness, after all, never hurt anyone.

But it also rather exposes the logic that it does not matter when you face the major powers: To win the tournament, after all, you have to play them at some point. The problem is that, sometimes, you have to face more of them than others.

Switzerland Punches Above Its Weight Again

And so, there they are again, like clockwork. Just as was the case in Brazil in 2014, France in 2016 and Russia in 2018, Switzerland has made the last 16 of a major tournament. Quietly — how else would the Swiss do it? — the country is enjoying a golden era.

It is not, in truth, an especially enthralling one. It is easy to deride the Swiss, as well as that other great recidivist qualifier for the knockout rounds, Sweden, as little more than cannon fodder for the traditional powerhouses in the round of 16. Neither team plays an especially adventurous style — though the Swiss victory against Turkey had no little style about it — and neither particularly captivates the imagination.

But that should not detract from what an achievement it is for two countries — admittedly extremely wealthy ones — with a combined population of less than 20 million people to stand so tall, so consistently among the superpowers of Western Europe, the countries that have effectively turned developing young soccer players into an industrial process.

And nor should it disguise the fact that the inability of two of Europe’s most populous nations — Turkey and Russia — to do the same is a quite extraordinary failure. Turkey has not even been to a World Cup since its third-place finish in 2002. It made the semifinals of Euro 2008, and has not played a knockout game since.

Russia was a semifinalist in 2008, too, and it enjoyed a stirring run to the quarterfinals in its home World Cup three years ago. But those finals-free runs represent a paltry effort for two countries with such a vast reservoir of talent.

The causes of those respective failures are not uniform — Russia does not export players, Turkey does not develop nearly enough of them — but there is one binding thread: Both Russia and Turkey are isolationist soccer cultures, resistant to the cutting-edge thinking and best practices that emanate from the leagues to their west. More than anything, both need to import ideas. They could do worse than to start their learning journey by looking at the Swiss, and the Swedes.