At last year’s Masters Tournament, the cut after the first two days was three over par. Adam Scott, the 2013 champion, was the co-leader on Friday night at seven under. But just six shots back, having easily made the cut at one under par, was another past champion: Bernhard Langer, who won the Masters in 1985 and 1993. He had just made his 26th cut at the tournament.

“I was thinking of making a charge and getting onto the leaderboard and having a chance to win on Sunday,” Langer, 63, said from his home in Florida. “That’s always my goal. I know it’s harder because I’m getting older and shorter. But if I hit it well, and I putt decent, I still think I have chance to win.”

The Masters is unique among the four major tournaments. Older pros usually contend in the early rounds. No one will be surprised this year if Fred Couples, 61 and the 1992 champion, or any of the other past champions in the field are on the leaderboard on Thursday and Friday. They may even be contending on Saturday.

Players pushing a mere 50 have won the tournament. Jack Nicklaus was 46 when he won his sixth Masters in 1986. And, of course, last year’s champion, Tiger Woods, was 43 at the time, making him the second oldest Masters champion when he put on his fifth green jacket.

And because only 50 players and the ones who tie make the cut, these older players are regularly beating out golfers in their 20s and 30s to play on the weekend.

One reason is that even though Augusta National has lengthened the course over the years — to 7,475 yards this year from about 7,000 yards 20 years ago — the well-guarded greens make the approach shots matter more.

“They know the nuances of the course,” said Craig Harmon, a golf teacher in Florida whose father, Claude, won the Masters in 1948. “You hit it on the wrong side of the hole and you have no chance, even if you’re 10 feet away. Or you could be 40 feet away and going for it.” 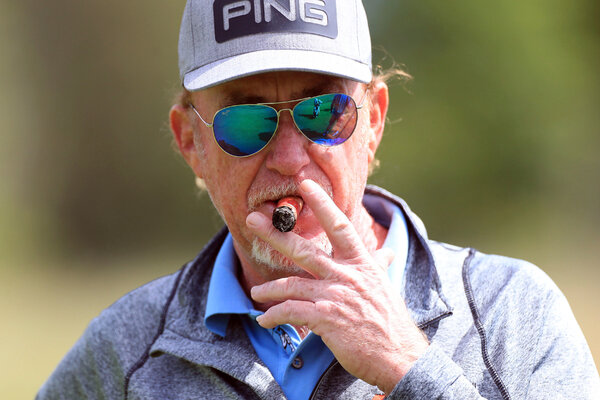 Miguel Ángel Jiménez, the cigar-chomping, wine-loving fixture of the PGA Tour Champions, played better at the Masters as his course knowledge increased. In 2014, at age 50, he finished in fourth place, ahead of the young stars Rickie Fowler and Matt Kuchar, who tied for fifth.

“It is not that we play the course better as we get older,” Jiménez said. “It is that the more we play Augusta, the more experience and knowledge we have of the course. Plus, patience is vital at Augusta, and we are probably a little more patient and less impulsive as we get older.”

In addition, many older players have continued to stay fit and competitive.

“In the 1970s, there was no Champions tour,” Harmon said. “My dad would show up not having played a competitive round in five years. Back then, those guys didn’t want to embarrass themselves. Now, with someone like Freddie Couples, it enters his mind that he could win it.”

“These guys, unlike the generation before them, are much healthier into their 50s and 60s,” he said. “Look at Bernhard Langer; he continues to play well and win on the Champions tour.”

For some seasoned players, there is a feel about Augusta National. They understand that the Masters has a rhythm all its own, though it may be different this year without the emotional support of fans packed around the greens.

“There are certain intervals in a round that if you get by them, they spur your confidence,” said Ben Crenshaw, who won the Masters in 1984 and 1995, when he was 43.

When Crenshaw won in 1995, he said, he was more patient than usual, something younger players only learn over many rounds. “I’m very much an emotional player,” he said. “I somehow kept my temper in check. My temper has gotten me many times in the past.”

But he also credits Carl Jackson, an Augusta National caddie who worked with Crenshaw dozens of times. “It really helps to have a great caddie like I had in Carl, especially with reading those greens,” he said. “You just have to play them a number of years to be able to putt them.”

Larry Mize, who won the Masters in 1987, chipping in on the 11th hole in a playoff to beat Greg Norman, has played in 36 Masters Tournaments, making the cut as recently as 2017 when he was 58. He said it was the design of the course that allowed older players to compete with and often best younger players.

“There are many ways you can play that golf course,” Mize said. “You can bomb it and fly it up there. But a lot of holes you can run the ball up there, even on 18. It’s very long, but it’s still playable.”

One thing older pros have learned to do is get comfortable with being outdriven.

“When I used to be paired with Tiger, people said Tiger is so intimidating, but I never felt that,” Langer said. “He was playing his game, and I was playing my game. He outdrove me by a huge number. But I know I just can’t hit it 325 yards.”

And for Mize, it is sticking to your own strategy. “You really need to stay in your game and not get out of it,” he said. “I know these guys are going to bomb it by me, and I just play my game. I know where to miss it. If I can do that, I know I can get up and down.”