Adam Ashley-Cooper is in doubt for the Waratahs' trip to Japan this week, potentially forcing NSW into two backline changes when Kurtley Beale returns for their second-round clash with the Sunwolves.

Ashley-Cooper was flattened by Hurricanes debutant Du Plessis Kirifi as the fulltime siren faded at Brookvale Oval on Saturday night. 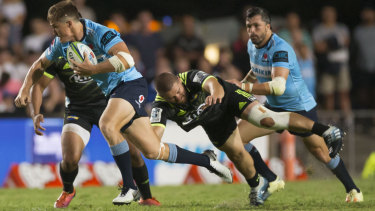 The Test veteran impressed throughout his first 80 minutes back in Super Rugby after three years in France and Japan, but had to be replaced as the Waratahs tried to snatch a win from one point behind.

It is understood he will have to observe return to play protocols and could be ruled out of the Sunwolves clash in Tokyo on Saturday. 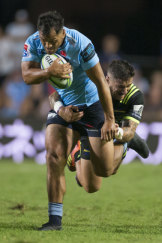 Strong carries: Karmichael Hunt impressed on debut for NSW after two years in the wilderness. Credit:AAP

The blow would give the NSW coaches plenty of material to mull around the selection table this week, with Beale coming off a rest week and, presumably, back into a starting role at inside centre.

What that means for Karmichael Hunt, whose retro midfield partnership with Ashley-Cooper was given the coach's and fans' ticks of approval, will be interesting.

Israel Folau has made no bones about his desire to spend the season in the No.15 jersey but on Saturday night declared he would be happy to play on the wing if it was to make way for the likes of Hunt and Beale.

"I've made it clear in the past that fullback is my preferred position but the team comes first," Folau said. "You've got strike players like KB and Karmichael. If the coach decides that he wants both of them on the paddock at the same time and if that means for myself to shift over to the wing I'd be more than happy to do that.

"I'm confident in those guys getting the ball out to the edges so I think it wouldn't be a problem."

The big fullback's blessing could trigger Beale moving out the back to allow Hunt to stay at inside centre, with Curtis Rona shifting in to take Ashley-Cooper's spot at No.13.

If Lalakai Foketi is declared fit he is a strong chance to start outside Hunt, but after picking up a hamstring strain in the Waratahs' trial match in Goulburn, it is unlikely he would be rushed back in to the line up if other options are available.

Gibson said Hunt and Ashley-Cooper handed everything they were asked to against the Hurricanes' midfield "blockbusters" Vince Aso and Ngani Laumape.

"They had a couple of big blockbusters in midfield with Laumape and Vince Aso, that's a handful, so I thought they acquitted themselves well, both Adam and Karmichael. They had some excellent carries," he said.

"With the possession that we had, I thought particularly those boys did quite well to get us go forward. We didn't manage to put many phases together, so that's something we can clean up."

Beale at No.12 would reprise the two-playmaker model the Waratahs have used to sometimes great effect for the past four years, but there will be many wanting more of the direct running Hunt brought against a quality New Zealand side.

"Karmichael's a great player and so is KB. They both bring their strengths to the side," Folau said.

"KB's someone I've really enjoyed playing alongside for a number of years now. He brings that spark. It's going to be interesting for the coaching staff to see where they go with that."

The Waratahs fly to Japan on Wednesday for their Saturday afternoon clash with competition cellar-dwellers the Sunwolves, who finished bottom of the table last season.

The Scott Hansen-coached side lost 45-10 to the Sharks at their season-opener, but Folau said they would not be taking the match lightly.

"They're an unpredictable side, they're going to throw some trick plays at you, so it's going to be a great challenge," Folau said.

"We're not going up there thinking we've got the win down pat, it's something we're going to have to work hard for. We expect the same that we encountered last year."