PUNTERS will have their fingers-crossed that Saturday's Ascot card gets the better of Storm Dennis.

The Grade 1 Betfair Ascot Chase is one of seven races set to entertain with Cyrname looking to wow once again. 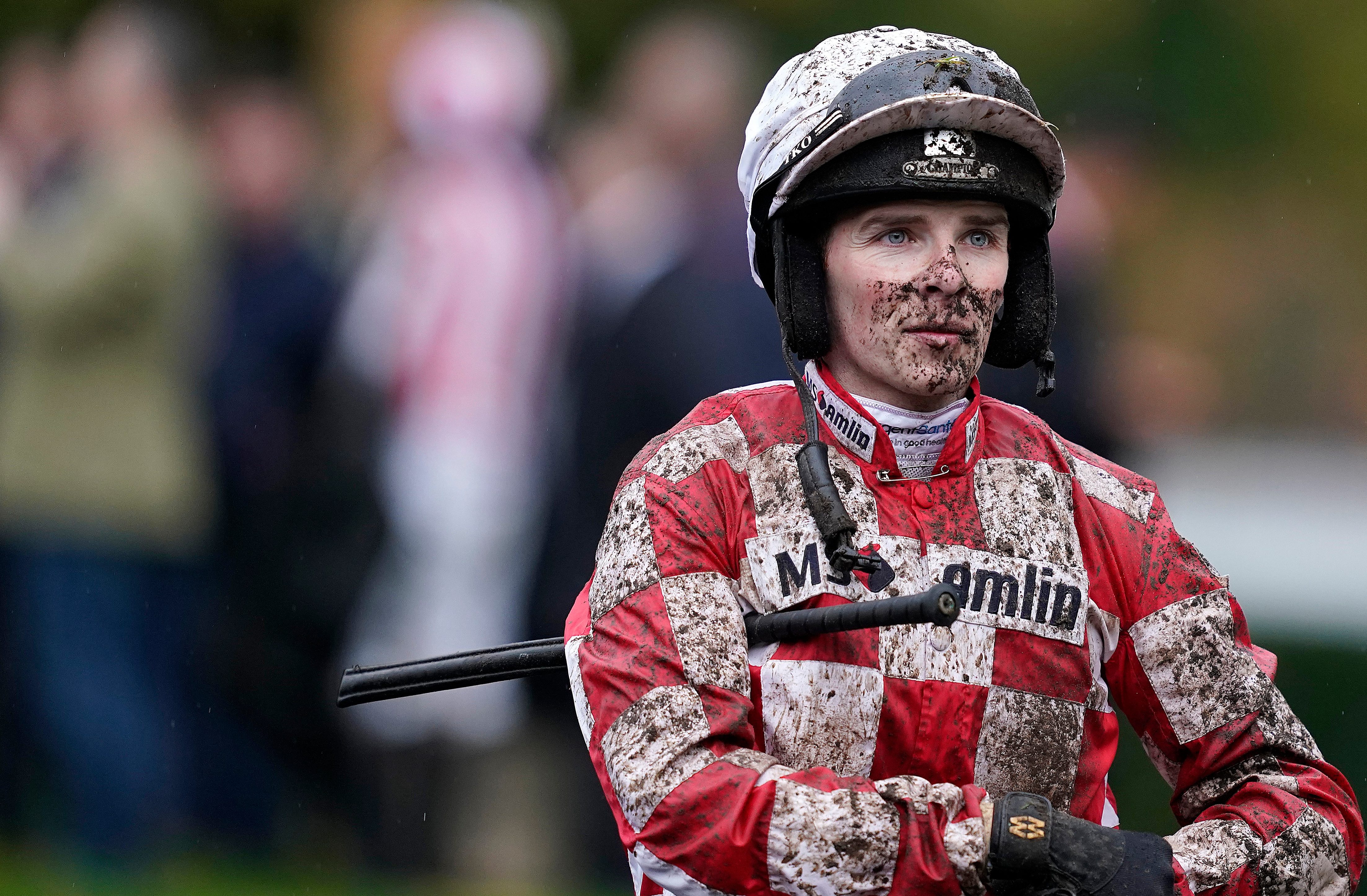 Only four are declared for the opener at Ascot, but it's an intriguing heat nonetheless.

Festival hopefuls MASTER DEBONAIR and Sporting John are the clear standouts in the quartet and closely matched on numbers.

Both look smart horses but preference is for Colin Tizzard's Master Debonair – a Grade 2 winner – who carries the same weight as his main rival.

He beat a good field here in a Grade 2 before Christmas in testing conditions and had previously shown smart form.

He knuckles down in his races and goes hard from the front. The step up in trip is a slight question mark with those tactics, but he may be able to dictate this small field.

Sporting John undoubtedly has oodles of talent, but there are questions to be answered around his form as well as the move away from Exeter.

There won't be much between them in the market and off level weights, Master Debonair makes more appeal.

It's hard to make much of a case for Torn And Frayed, but Nicky Henderson's Pipesmoker cannot be ruled out as he'll likely kick forward from his third behind Chantry House.

The most interesting race of the day comes up next. A really exciting field have assembled for this Grade 2 Novice Chase.

Whether any of these are quite in the shake up for honours at the Festival this spring is debatable, but there's only one way to find out.

Pym will likely head the betting in the Altior colours for Nicky Henderson. He's kicked on in style over fences, winning two from three since chasing. He carries ba

A course and distance win in handicap company back in November was encouraging enough, before he stepped up on that at Cheltenham in December.

He's a sound jumper and stays well, but this is by far and away his toughest test and there are more attractive punting options in this heat. Reputation can only take you so far.

Anthony Honeyball's Sam Brown is a talented horse and a Grade 2 winner last time at Haydock.

But that race fell apart to an extent, and a 5lbs penalty makes things trickier in this deeper race.

Colin Tizzard took this last year with Mister Malarkey and looks to have a similar horse in the making in COPPERHEAD.

He has been a revelation over fences this year and his trainer put him up at the start of the season as his horse to follow.

A rise of 29lbs in the weights in three starts justifies that and he jumped his rivals silly last time out at Newbury.

This is a hot race. but he gets weight off the majority of rivals and he can help snap the yard out of this pre-Festival cold patch.

Danny Whizzbang and Two For Gold are both Grade 2 winners and they therefore carry penalties too.

But the merits of those wins are questionable and this is by far and away a tougher proposition.

The first big handicap of the day comes next and it's a really competitive heat as you'd expect.

Sean Curran's DOMAINE DE L'ISLE looks to be the ace in the pack though.

He's been thrown up 6lbs for winning a good race here last time and you could argue that was over a trip too short.

He's back up in trip again, with Brian Hughes booked. The pair united previously at Newcastle when they romped home two runs ago. He looks hard to beat off 146.

Ascot favourite Regal Encore is in with a shout too. Despite getting on at the age of twelve he is going better than ever and a 4lbs rise for a recent course win doesn't look harsh.

Anthony Honeyball is having a great year and this lad won't be far away if running his race in preparation for a shot at the National.

Red Indian was backed off the boards before his comeback run at Haydock. He showed a bit, but not enough to justify that money and doesn't look obviously well-handicapped.

Jepeck is interesting and will relish conditions. Rex Dingle takes off a valuable three and his form behind Takingrisks reads well over fences now. Don't rule him out.

Nigel Twiston-Davies had hoped Ballyoptic would be running in better races than this down the line after his Charlie Hall win.

Things haven't clicked since then and it'll be hard to give heaps of weight away in this.

A 13lbs rise for Captain Drake looks a bit harsh but he remains unexposed.

Race 4 – 3.00 Give The Gift Of Ascot Annual Membership Handicap Hurdle

A devilish handicap hurdle over just shy of two-and-a-half-miles next up. A great race for each-way punters.

It's a race that tends to be won by younger horses and THE CON MAN looks well-handicapped for the Donald McCain stable.

He loves it in the mud and has only had the four runs over hurdles. There is plenty more to come from this lightly-raced seven-year-old.

Form behind Marie's Rock is nothing to sniff at and in his second run in a handicap he absolutely hosed up. He looks no con.

Malaya looks of interest dropped in the weights. He's a bit of a tearaway though and Harry Cobden will have his hands full.

Harry Fry's Air Horse One is another mud-lover and won this back in 2017. His form has been pathcy since but he's only a few pounds higher this time around and has a chance here.

Nick Littmoden's Fleur Irlandaise should have another race in her at some point. She's not run in a handicap since dotting up at Kempton off only 5lbs higher. The ground may be a slight worry.

There's not much point mucking around here.

The monster that is CYRNAME should bounce back to his dominant best in his backyard.

He destroyed Altior here and this opposition are far from that. As the odds suggest you need to be brave going in at a short price, and it looks a no bet race.

Riders Onthe Storm is progressive but will surely have an eye on the Ryanair at the Festival. They'd be crazy to try and go hammer and tong with the best chaser in Britain, if they have any Cheltenham ambitions.

Traffic Fluide shouldn't be winning this and Janika is a nice horse but no Cyrname.

This is an absolute minefield of a race. It's not the best quality – especially for a Saturday – and far from a race to go wild in.

ST BARTS looks worth an each-way shot for Philip Hobbs. He's only had the three spins over hurdles and wouldn't have to be anything special to win this off 118 with Ben Jones booked.

The conditions will suit and he looks like he's a horse that needs a trip. A bit more improvement should see him go close.

Vaziani is in good nick and another that will enjoy the mud. His trainer is in great form and this six-year-old is improving steadily of late.

A repeat of his last two efforts should put him in the mix.

A 5lbs rise for Maypole Class makes things a bit trickier in a better field. He can be taken on.

Another worth a second glance is David Pipe's Taj Badalandabad. He's completely lost his way of late but has some serious form in the book and a revival is not past the realms of possibility.

Any money for him and it may pay to sit up and take notice.

The closing bumper is another race not to go wild in.

But it's hard not to be drawn to Anthony Honeyball's BELLE DE MANECH who gets some weight as a four-year-old.

She ran well enough at Cheltenham last time out and wasn't given an overly hard time in a race that has worked out well. This shouldn't take too much winning.

Pure Bliss looks vulnerable under a penalty. The race she won at Ffos Las doesn't add up to much.

Fergal O'Brien is worth a follow in races like this and his Forthegreatergood was well fancied last time out on debut. She'll need to improve on that third but it's impossible to rule that out.