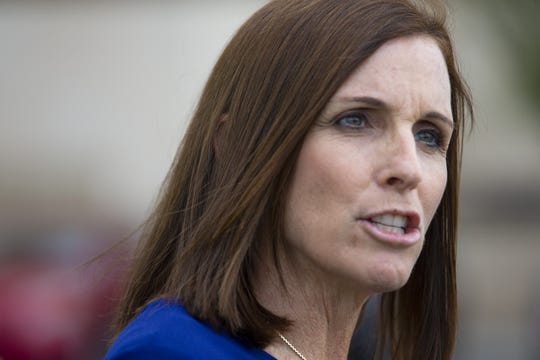 U.S. Sen. Martha McSally speaks to the press before a town hall with commanders and a meet with junior airmen at Luke Air Force Base in Glendale on March 21, 2019. (Photo: Cheryl Evans/The Republic)

Arizona Sen. Martha McSally had a combative encounter with a CNN reporter on Thursday as the Senate gears up for President Donald Trump’s impeachment trial.

Manu Raju, CNN’s senior congressional correspondent, approached McSally, R-Ariz., in a hallway and asked whether she would consider new evidence as part of the impeachment trial.

“Manu, you’re a liberal hack. I’m not talking to you,” McSally dismissively shot back.

“You’re not going to comment, Senator? About this?” he asked.

A) you are.
B) here’s the video. https://t.co/zVgk9pBhdfpic.twitter.com/cfFdotLjFK

A McSally spokeswoman did not immediately respond to The Arizona Republic’s request for comment about what prompted her putdown.

Arizona Gov. Doug Ducey appointed McSally to the Senate seat vacated by the 2018 death of veteran Sen. John McCain, R-Ariz. She is up for election this year in what is expected to be one of the nation’s most closely watched Senate races. She will likely face Democrat Mark Kelly in the general election.

Michigan lawmaker to female reporter: High school boys could ‘have a lot of fun’ with you

Senate to open impeachment trial against President Trump: Here’s what to expect