When it comes to what they may or may not do with the No. 1 overall pick and the rest of their selections in next Thursday’s NFL draft, the Cardinals aren’t just keeping all options on the table. They’re keeping them on the breakfast nook, the nightstand, the outside patio furniture and on the bar rail in the man cave, too.

It wasn’t very surprising then, that when General Manager Steve Keim and coach Kliff Kingsbury met with reporters on Tuesday to discuss the draft, there weren’t going to be any concrete answers as to what they’re planning to do.

“Have we received calls about trading for the first pick or any of our players? Those are some of the things I’m going to keep private and in-house. … We’re nine days away, guys. Anything can happen.” 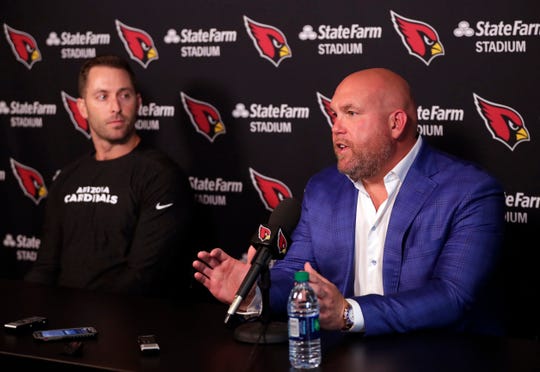 Speculation has run rampant for several weeks now about what the Cardinals will do at No. 1. Much of it has been dominated by talk the team will use it on former Oklahoma quarterback and Heisman Trophy winner Kyler Murray, whom Kingsbury has been enamored with for years.

Those rumors, in turn, have led to natural perceptions that the Cardinals must be willing to trade Josh Rosen, the quarterback they drafted with the 10th overall pick just a year ago. But after trading a third- and fifth-round pick to move up five spots to select Rosen, whom they had anointed as their future face of the franchise, why would they be open to the possibility of drafting a quarterback again?

“I never said I was,” Keim said, evoking a strange silence in the room.

Asked if that meant he’s not open to the thought of drafting a quarterback again, Keim said, “I didn’t say that.”

What he did say, however, is that there could be an issue with Murray’s commitment to football. A high first-round pick of the A’s last year, Murray announced he was shunning baseball when he declared for the NFL draft. But teams, including the Cardinals, might have concerns Murray could bail after a year or two if things don’t go smoothly in football and he decides to pursue a career in Major League Baseball.

“I think whoever drafts him is certainly going to have to address that with him,” Keim said.

The Cardinals probably spoke to Murray about that, but Keim was cryptic when asked that very question, saying only, “Maybe.”

Keim also was asked if the Cardinals would insist on putting a no-baseball clause in his contract should they draft him, but his response of “Is it legal with the CBA?” made the whole situation even more mysterious.

It’s that time of the year in the NFL, of course, when you never quite know what to believe.

“It’s been fun. It’s been exciting,” Keim said of all the endless rumors and unsubstantiated reports. “I’ve never had this opportunity and certainly don’t want it again, but when it comes to this press conference and you guys think this is misinformation, I mean, we’re not the only ones spitting it out. There’s a lot of it going around.

“The fact that I don’t know what we’re doing but everybody else does, that’s concerning. (The amount of misinformation) is amazing. It puts it into perspective for me. Every time I see a report about another team, I take it with a grain of salt because it’s pretty heavy. At this time of the year, we all know the drill. It’s fun and it’s good for talk shows and TV, but we have a job to do as well.”

Keim wouldn’t reveal how many conversations and with whom he’s had about possibly trading out of the top spot in the draft or any other potential trade talk involving current players on the roster. He’s keeping it to himself “out of respect for them, Number 1,” he said, “because I don’t want to air their business.

“And two, we haven’t made any decisions in terms of moving the pick or players or those sort of things, so until that happens, we’ll continue to keep it close to the vest.”

Asked if some of those conversations have given him serious reason to pause and consider, Keim said, “Yeah, there always is. I get excited. I like to do deals. But at the same time, I like good players.”

It’s in that exact realm where Keim seemed to genuinely be the most truthful on Tuesday. Now in his seventh year as GM, he reminisced about past drafts and how he always got excited about the top prospects and “the big grades that you slap on them but just never had a chance to get them.”

“But for the first time, now you’re sitting in that spot and it’s a little different,” he said. “The good news again on draft day is, if we don’t trade that pick, were going to have a player that we fell in love with.”

If it’s not Murray, and there have been reports that the Cardinals’ interest in him might be waning, then two of the most likely prospects at the top of their list figure to be former Ohio State defensive end Nick Bosa and former Alabama defensive tackle Quinnen Williams.

Keim didn’t say a whole lot on Tuesday about Bosa, simply answering a question as to whether the player’s injury history might be a concern. “I think that’s a part of the puzzle that you have to look at,” he said, adding teams have to trust their medical staffs.

But he raved about Williams, the 2018 Outland Trophy winner as the nation’s best interior lineman, calling him “a dominant defender” and “a big dominating presence that can take over games.”

“I know that his production is more so this year, but I mean, an interior player that is that dominating at that size has been fun to watch,” Keim said. “He kind of reminds me of back in the days where I went and watched (Richard) Seymour, (Marcus) Stroud and (John) Henderson, those guys coming out. … You watch the LSU game and it was almost light a highlight tape.”

Normally, an interior defensive lineman doesn’t have the same value as a clear-cut elite pass rusher, but Keim said Williams “can bounce anywhere” and has got “tremendous versatility inside.”

Whoever they pick, Keim said the Cardinals will have done their due diligence on the player. That’s why he dismisses the notion that there must be so much gravity hanging over the selection to make sure the Cardinals get it right.

“The preparation is no different,” he said. “The great news for us is you don’t have to sit and procrastinate about whether that player is going to be there or not. Again, it opens up a lot of different doors for you. It gets you excited.”