It has become a grim but familiar pattern: Soon after an N.F.L. player dies, his surviving family faces the decision about whether his brain will be donated to scientists who test for signs of chronic traumatic encephalopathy, the degenerative brain disease associated with repeated hits to the head.

Relatives of Phillip Adams faced that choice last week after Adams, whose six-year N.F.L. career ended after the 2015 season, fatally shot six people and then himself in his hometown, Rock Hill, S.C. The family asked that his brain be sent to the C.T.E. Center at Boston University, the leading site for research on the disease, which has been found in hundreds of football players and other athletes but can be diagnosed only after death.

Even if investigators request an expedited diagnosis — and thus far they have not — the researchers at Boston University would still need about four months to produce a definitive answer.

While it has become common for N.F.L. families to question whether, and how deeply, C.T.E. affected a player, the sudden and atypical nature of Adams’s violent burst, plus the pressures in the football-mad community where he lived, figures to cloud the answers that brain testing might provide.

“Having the disease can make it more likely for you to be depressed and even kill someone or yourself, but we’ll never know if it was the only or the main cause of this tragic outcome,” said Adam M. Finkel, a quantitative risk assessor at the University of Michigan School of Public Health. “But the inability to prove that the disease caused any particular outcome should not be used to cast doubt on the broader point, that exposure to repeated head hits is strongly associated with a disease that increases various bad outcomes.”

Even if Adams is found to have had C.T.E., that may provide only one clue as to why he killed himself and six others. The disease has been linked to a host of symptoms, including aggressive, impulsive behavior and even suicidal thoughts. In many cases, families and friends of players found to have had C.T.E. say that the symptoms were uncharacteristic of the person they knew and that they became more pronounced over time.

In this case, Adams’s sister, Lauren Adams, told USA Today that her brother, who was 32, had recently become unusually aggressive.

“His mental health degraded fast and terribly bad,” she said. “There was unusual behavior.”

The disease has also been tied to memory lapses, loss of focus and problems following directions and handling everyday chores. But researchers have found only associations, not causal links, between the disease and the many apparent symptoms.

It remains difficult and perhaps impossible to determine a motive after a suicide because so many factors can play a role, including persistent mental distress and drug use. Adams does not appear to have left a note that tried to explain his motives, and such messages are often considered unreliable.

Much is still publicly unknown about what kind of medical treatment Adams may have received, or what relationship Adams had with Dr. Robert Lesslie, one of the six people who were murdered. Lesslie was a prominent local physician who specialized in emergency and occupational medicine.

Representative Ralph Norman, Republican of South Carolina, told WBTV in Charlotte, N.C., last week that he had learned from law enforcement officials that Dr. Lesslie had seen Adams as a patient. The Sheriff’s Office for York County, S.C., has not confirmed the relationship.

In 2017, Adams tried to apply for so-called line-of-duty benefits for injuries he obtained while in the N.F.L., but he had some trouble getting the necessary paperwork from his former teams, according to a disability adviser who worked with Adams. It is unclear how many of Adams’s six former teams provided injury records. 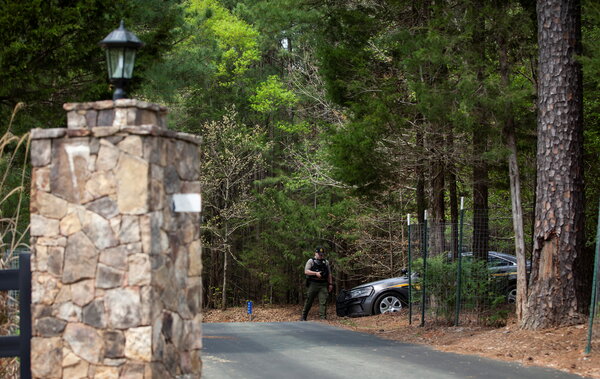 Those closest to Adams described him as not having come to terms with the end of his N.F.L. career and as someone who had a caretaker role in his family. He was very close to his mother, Phyllis Adams, and had been spending more time in his childhood home with her in recent months, neighbors said. His former agent, Scott Casterline, said Adams had turned down a job offer from him because he did not want to relocate to Texas, where he would be separated from his young son.

Adams grew up in Rock Hill, which has given rise to so many N.F.L. players that it is known as Football City U.S.A.

Casterline and some of Adams’s friends said Adams held himself to a high standard and never quite got over how his professional career had fizzled because of injuries and other factors.

Like some other players, Adams focused so much of his early years honing his craft to get to the N.F.L. that he may have been at a loss over what to do next.

“It always starts and ends with expectations,” said Seth Abrutyn, a sociologist at the University of British Columbia who studies the intersection of youth suicide and mental health. “If you are the main caretaker, or at least believe you are, the expectations you face can intensify. They are invisible pressures that exert real force on us.”

Adams’s access to guns could have also been a factor in the tragedy. States with higher suicide rates tend to have higher gun ownership rates, research has shown. The average gun ownership rate in South Carolina was 43 percent in 2016, according to a recent Rand Corporation study, well above the average of 32 percent for all states.

Police said Adams used two guns in the shootings last week, a .45-caliber and a 9 mm. He was arrested in 2016 in North Carolina and charged with carrying a concealed weapon, a misdemeanor.

“What drives the overall suicide rate in the U.S. is gun ownership in the home,” said Matthew Miller, a professor of health sciences and epidemiology at Northeastern University, who has studied the intersection of guns and suicide. “It’s much easier to die when you can reach for a gun than when you can’t.”

This and other factors may have fueled Adams’s fatal actions, Abrutyn said. Untangling them to find a clear pattern of behavior may never be possible.

“It’s easy to have a monocausal explanation because it allows us to sleep better at night,” he said. “When we look our own lives, we know that that’s not true.”