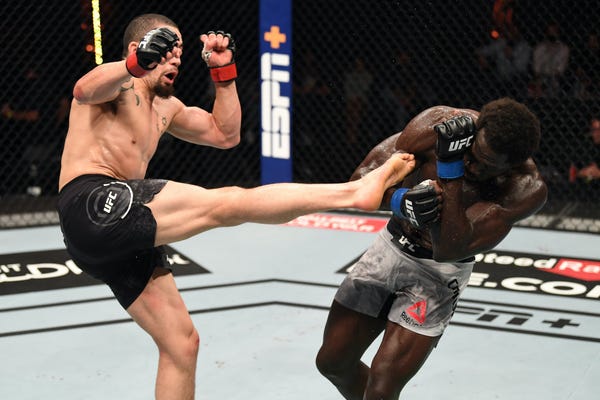 An American UFC fighter called Jared Cannonier said he fought three rounds Saturday with a fractured arm after his opponent injured him with his first kick of the match.

Cannonier fought Robert Whittaker in the co-main event at UFC 254 on Fight Island in Abu Dhabi, losing a decision.

According to his later comments, he did so with a fractured arm.

"That didn't go exactly how I wanted but my spirits remain high and I'm happy with how I fought all things considered," the 36-year-old said on Instagram.

"The very first kick he threw broke or fractured my left ulna, I couldn't find my groove and adjust quickly to get the W [win] so I'll take my L [loss] with pride."

Losing to Whittaker interrupts that winning streak, and maneuvers the Australian into a likely second title shot at the UFC middleweight champion Israel Adesanya, as Whittaker now has two big wins in a row.

"Whittaker certainly lived up to my expectations before and after the fight. Congrats mate."

Cannonier shared a photograph on his social media account which shows bandages wrapped around part of his left arm.