CLEVELAND — When the Yankees’ Aroldis Chapman took the mound for the top of the ninth inning on Tuesday night, some fans at Progressive Field chanted Rajai Davis’s name. It was a moral victory, of sorts, invoking the player whose homer off Chapman set Progressive Field ablaze in Game 7 of the 2016 World Series.

Chapman pitched for the Cubs then, and we know what happened next: Despite blowing the lead on Davis’s homer, Chapman recovered to become the winning pitcher and celebrated a title on the Indians’ field. The All-Star Game came to Cleveland this week, but the World Series has not returned.

“They’re very aware of what Chapman did against us,” said Francisco Lindor, the Indians’ shortstop, who flew out against Chapman in that fateful Game 7. “When a crowd boos somebody, it’s not that they don’t respect them. They’re a little upset that they did something right against us.”

Chapman struck out the side on Tuesday to finish the American League’s 4-3 victory over the National League, the seventh win in a row for the A.L. In some ways, it was a Yankees kind of night: Masahiro Tanaka earned the victory, Chapman earned the save, and C. C. Sabathia, an honorary All-Star, earned the love.

Sabathia, who is retiring after the season, tossed a ceremonial first pitch to the former Cleveland catcher Sandy Alomar Jr. He also made a mound visit to Chapman with two outs in the ninth, getting one last salute from the crowd. Sabathia signed with the Indians out of high school in 1998, and by the time they traded him, a decade later, he had built a foundation for the rest of his life.

“I came here at 17 years old like a boy, left here at 27 years old with three kids — a grown man,” Sabathia said. “It’s always a special place for me.”

Sabathia helped knock Cleveland from the playoffs in 2017, and the Houston Astros did it last October. The Indians seemed headed for a teardown this season, but finished the first half on a 21-8 sprint and now lead for the second A.L. wild-card spot.

For now they have saved their season, and with apologies to the Yankees, they won this All-Star Game, too.

That sounds strange to say, because Lindor and Carlos Santana were hitless in five at-bats and closer Brad Hand allowed two runs. But Michael Brantley, Shane Bieber and Carlos Carrasco made it happen.

The stoic Brantley, a former Indians outfielder who now stars for the Houston Astros, drove in the game’s first run with a double. The fans roared — and he actually noticed.

“I had a big smile on my face, and I don’t smile too much on the baseball field,” Brantley said. “But you get a reception like that, you have to smile.” 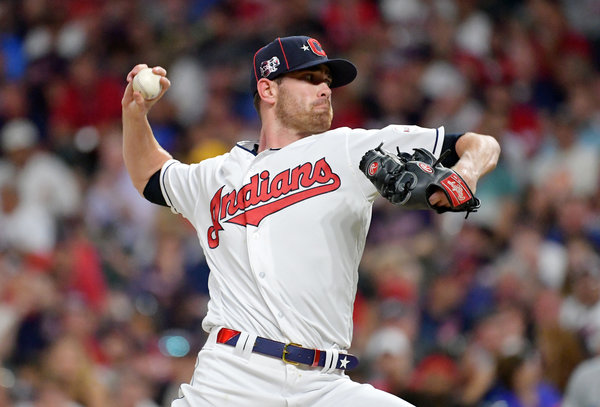 Bieber was named Most Valuable Player for striking out the side in the fifth, and Carrasco, another Indians pitcher, stood with his teammates at the end of that inning in a poignant display of unity.

Carrasco, 32, revealed last weekend that he has chronic myeloid leukemia. He has been cleared to begin throwing workouts, but he has not pitched since May 30 and there is no timetable for his return. His appearance at the All-Star Game — a surprise to the players until Tuesday afternoon — was part of baseball’s Stand Up to Cancer initiative.

“It’s a message to let him know we stand up for you, we’re all next to you — as a team, as a family, we’re right there for you,” Lindor said. “That’s all that matters. We all believe in him. We all believe he’s going to kick cancer’s butt and he’ll be fine.”

Bieber has helped the Indians surge without Carrasco and Corey Kluber, a two-time Cy Young Award winner who has missed more than two months after a line drive broke his right arm in early May. In seven starts since Carrasco’s last appearance, Bieber is 3-1 with a 3.09 earned run average, holding opponents to a .201 average.

Bieber, who was roughly league-average as a rookie last season, made the All-Star team as a replacement for Texas’ Mike Minor, who was ineligible after pitching on Sunday. Indians starter Trevor Bauer, the major league leader in innings pitched, said Bieber was throwing a bit harder this season and had greatly improved his changeup.

“His slider and curveball are largely the same, but his command is impeccable,” Bauer said in a text message Tuesday night. “And he’s getting better pretty rapidly with understanding how to work through lineups multiple times and how to recognize what adjustments hitters are making to his approach within a game. He’s a bright kid, a sponge for information, and he listens. Pretty good combo overall.”

Bieber, 24, was at his best on Tuesday, fanning Willson Contreras with a fastball, Ketel Marte with a curveball and Ronald Acuna Jr. with a slider. A native of Laguna Hills, Calif., he chose a red Chevrolet Silverado 1500 LT Trail Boss as his prize because it seemed more mobile than the other option, a white Silverado 2500 HD High Country.

“I didn’t really know what to think,” Bieber said, when asked for his reaction to winning. “Kind of lost all feeling in my body.”

The All-Star Game began in 1933, but only two others had won the M.V.P. in their home park: Alomar here in 1997 and Pedro Martinez in Boston two years later.

For baseball, the All-Star stage was a chance to showcase young talent like Bieber and the Mets rookie Pete Alonso, who won Monday’s Home Run Derby and drove in two runs with a single on Tuesday. But it was also a national platform to recognize Tyler Skaggs, the Los Angeles Angels pitcher who died at 27 in his hotel room on the team’s trip to Texas last week. (The cause of death has not been announced.)

The league held a moment of silence after player introductions, and most All-Stars wore a black patch with Skaggs’ No. 45 over their hearts. The two Angels at the game, Mike Trout and the injured Tommy LaStella, have not been back to Anaheim since Skaggs died, and wore 45 instead of their usual jersey numbers.

Trout said several players thanked him for honoring Skaggs, a popular left-hander who was enjoying his best season in the majors.

“This is all for him,” Trout said. “He always wanted to be an All-Star — and tonight, he was.”