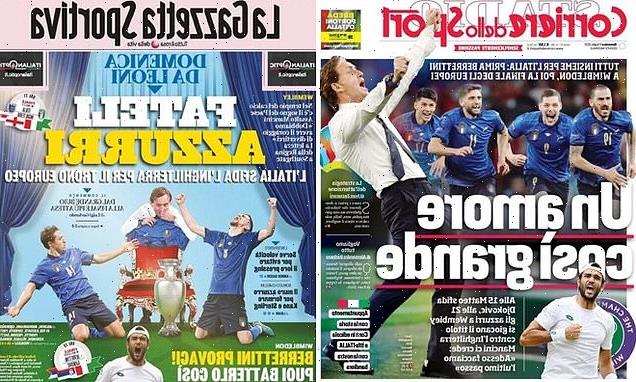 ‘All of Europe supports us’: Italy’s papers brag that ‘The Brexit Effect’ will mean Roberto Mancini’s men have huge support against England in Euro 2020 final… as they urge the Azzurri and Wimbledon finalist Matteo Berrettini to make it a Super Sunday

Italian papers have not been shy to bring Brexit into the equation as they urge their long-unbeaten footballers and tennis star Matteo Berrettini to take one more step in London, winning Wimbledon and Euro 2020 to seal a momentous day for their nation.

World number nine Berrettini faces a huge test to shock defending champion Novak Djokovic in the final at SW19 this afternoon, before the Italian media will be desperate for their side to win at Wembley in a contest that looks far more difficult to predict.

England can earn ‘wonderful revenge against Europe’, says La Stampa, after being ‘humiliated’ in Brexit negotiations – and the outlet even claims that victory would ‘light the fire of recovery’ for the British economy during the pandemic. 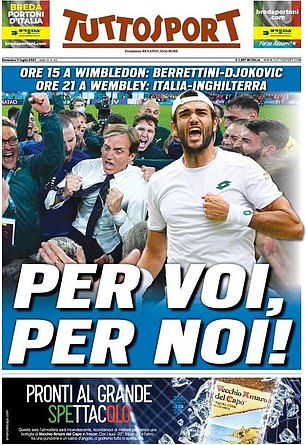 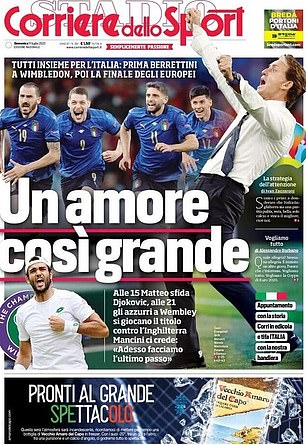 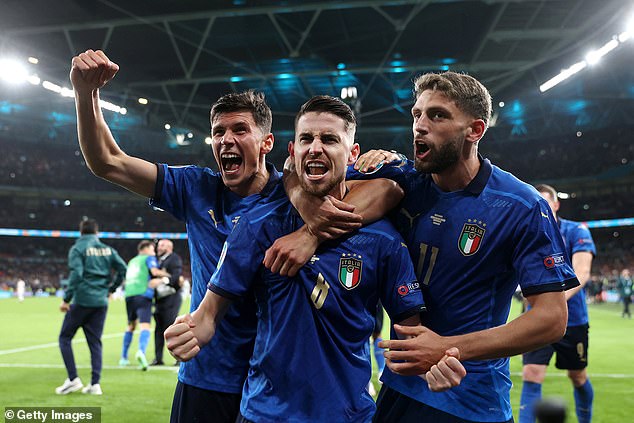 The paper notes the ‘Brexit Effect’ has the EU swaying towards Italy and Ursula Von der Leyen, the president of the European Commission, and European Council chief Charles Michel are among the major political names hoping the Azzurri will win, according to La Stampa. ‘Europe Cheers on Italy’, it adds.

Tuttosport uses the headling ‘For you, for us,’ setting the roaring Berrettini and the celebrating Italy players and staff side-by-side on its front page.

Djokovic has backed Italy, where he spends plenty of his time as a fluent Italian speaker, and quipped that he hopes theirs will be the only major sporting victory of the day in green, white and red.

Several papers reference the England team’s support for Black Lives Matter and LGBTQ rights – two issues that have been prominent during the finals.

England wants to demonstrate ‘moral supremacy’ to Europe, according to one Italian observer, adding that the English are free from being ‘the bringers of a superior moral authority’ and ‘showing foreigners how things should be done’ in the aftermath of leaving the EU.

Marco Verratti, Gianluigi Donnarumma and Jorginho are a ‘galactic trio’ who will ‘bewitch Wembley’, according to the Corriere dello Sport, which warns that ‘Italy’s top players can make the difference’.

The paper’s front page headline is ‘Such a big love’, reflecting one of Italy’s official songs. 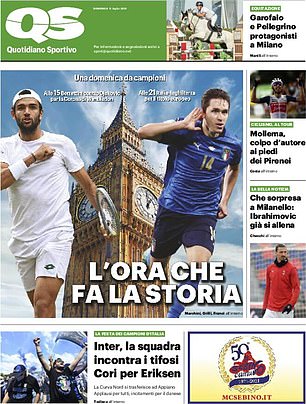 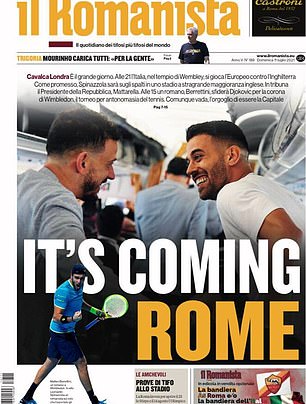 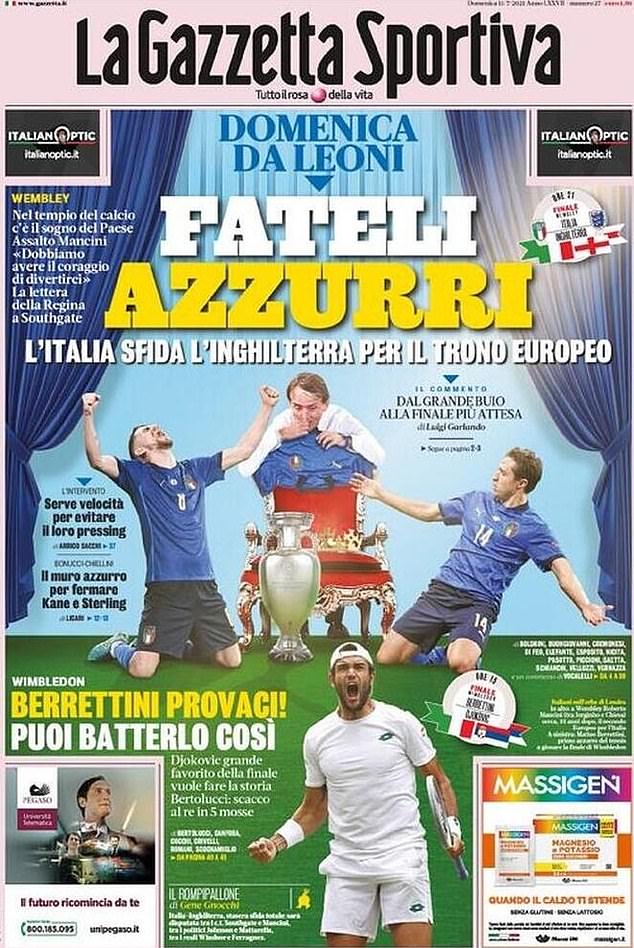 Ex-Valencia player Amedeo Carboni believes England have a five percent higher chance than Italy of winning because they are at home, although he also cautions that they could feel the pressure because of that.

In Spanish oracle Diario AS, tactical expert Axel Torres believes that the contest could boil down to a battle of goalkeepers – and he picks Donnarumma to outshine Jordan Pickford.

‘Write the story’, urges Quotidiano Sportivo, even involving Big Ben as they place Italy livewire Federico Chiesa and Berrettini either side of the landmark.

French paper L’Equipe reinforces the theme of Europe rooting for Italy, claiming that 69 per cent of French fans will be behind the visitors, with a mere fifth wanting England to win and a further 20 percent remaining neutral.

The Corriere della Sera insists that Italy ‘launch an assault’ on England in their bid to become champions for the first time in 53 years. Their opponents, as the vast majority of the Wembley crowd will be keenly aware, have never won the title.

The now-familiar subversion of England’s unofficial anthem is used by Il Romanista on its front page, advertising that ‘It’s Coming Rome’ alongside a photo of Leonardo Spinazzola enjoying himself on Italy’s flight to London. 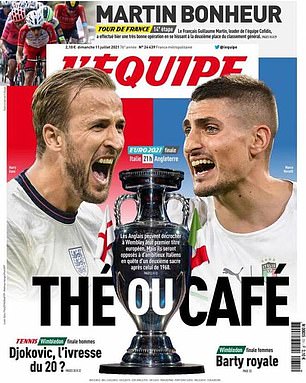 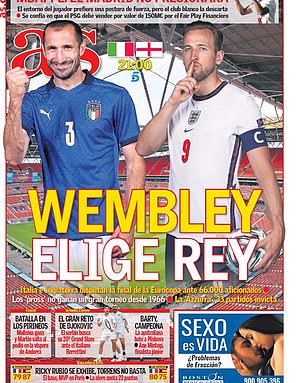 Swashbuckling Spinazzola was having an excellent tournament out wide for his country before sustaining a long-term knee injury, but he has remained part of the Italian group and was pictured with them at Tottenham’s training centre after they landed.

Il Romanista also includes a photo of Berrettini, who is the first Italian man ever to reach the Wimbledon final and the first to reach a Grand Slam final since Adriano Panatta in 1976.

‘Do it, Azzurri’, comes the war cry from La Gazzetta Sportiva, which includes Mancini eyeing up the Henri Delauney Cup from behind a throne.

Sportiva also makes space for Berrettini beneath a couple of Italian players on what could be one of the most remarkable days in Italian sporting history.

‘Italy challenge England for the European throne,’ it thunders, adding that this is a ‘Sunday for lions.’ 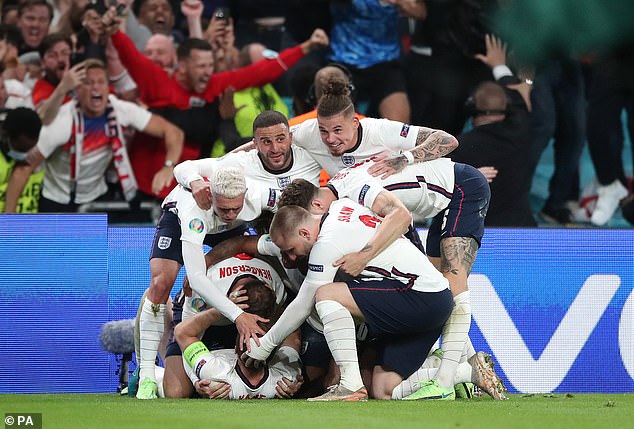