Players who elect to bump will be held accountable for the injury they cause to an opponent under a change to rule interpretations approved by the AFL on Monday.

And the AFL has confirmed that there will be a crackdown on niggling and other ball incidents, with more frees paid against players who infringe in the kind of off-field incidents that crept in to the game during 2018. 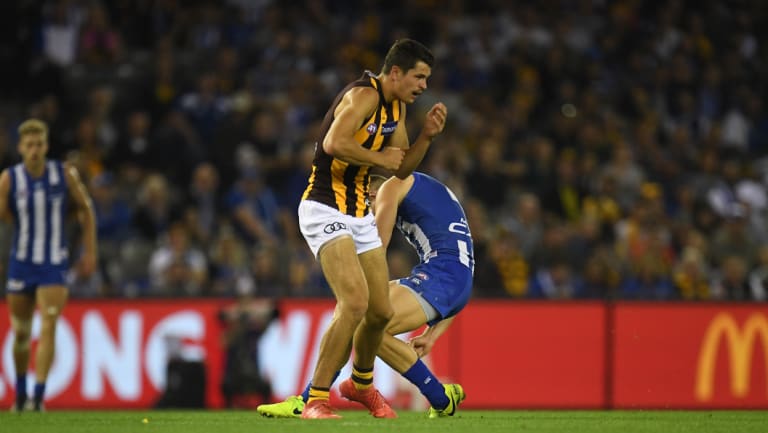 Ryan Burton was cleared over this bump on North’s Shaun Higgins in April.Credit:AAP

Under the bumping change – which actually appears to be the restoration of a previous rule – a player in the position of Ryan Burton would be suspended for the then-Hawk's bump on North Melbourne's Shaun Higgins back in April of this year.

In that instance, Burton was clearedwhen the match review ruled that Higgins had been felled by a head clash. Higgins was knocked out and required surgery on his lip.

Match review officer Michael Christian's decision to clear Burton prompted widespread debate and criticism about whether the then Hawk (now with Port Adelaide) deserved suspension. Christian ruled that Burton took reasonable care to execute the bump and "couldn't reasonably foresee that there was going to be an accidental clash of heads".

The AFL Commission approved of the change, which means that players who decide to bump are more likely to be suspended if the opponent they bump is concussed or injured, even if the injury is caused by a clash of heads.

Burton's bump on Higgins became a test case for incidents in which a player opts to bump an opponent who isn't taken high by the bump but is still felled or concussed. Higgins had been running with the ball when he was knocked out, with Burton choosing to bump rather than tackle the North star.

The change – or reversion in the rules – would also see a player held responsible, for example, if the opponent he elected to bump made forceful contact with the turf and was concussed.

The commission also approved a crackdown on niggling and other off the ball incidents at Monday's meeting, which had a heavy focus on how certain incidents would be dealt with by the umpires and match review officer.

The commission approved too a number of changes that had been recommended by AFL football operations boss Steve Hocking, who has presided over a major review of the rules and oveseen several changes to the laws of the game in an attempt to reduce congestion and improve the spectacle.

While there has been a crackdown on the niggling and off the ball incidents that were seen to have proliferated during 2018, punches will retain their current thresholds for suspensions under the match review process.

The AFL Commission had approved some significant Hocking recommendations on the rules at an early post-season meeting.

These changes including a revamped kick-in system, the compulsory "six-six-six'' formation at centre bounces, the scrapping of the prohibition on hands-in-the-back in marking contests and a change to the holding the ball rule for ruck contests, with the ruckmen now given normal prior opportunity to dispose of the ball when they grab in a ruck contest.