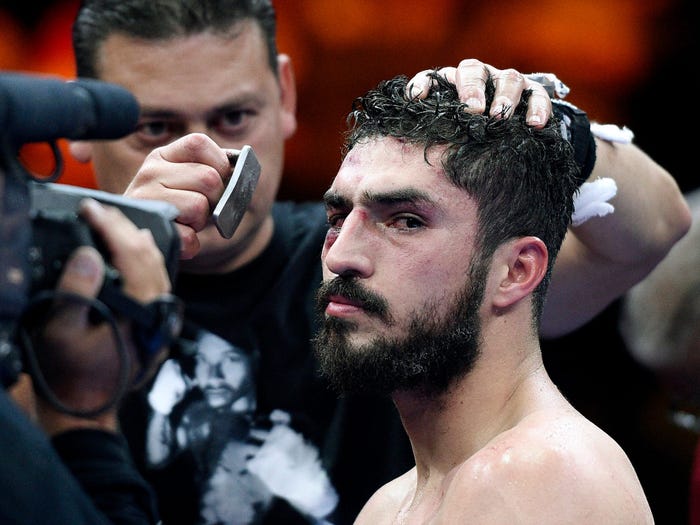 Josesito Lopez is rarely in a dull fight.

The man dubbed "Riverside Rocky" returns to the ring Saturday on the undercard for an event headlined by Errol Spence Jr.'s welterweight world title defense against Danny Garcia at the AT&T Stadium in Arlington.

But having spoken to people involved in the show, Insider understands Lopez could steal the headlines as he's in a 147-pound bout with Francisco Santana which guarantees action.

That's according to the former two-time welterweight champion Shawn Porter, who will be commentating on the fight for Fox Sports pay-per-view.

"That's a great action fight for the undercard to really get us up for the night and main event," Porter told Insider.

Insider also spoke to Lopez himself, who told us he was pleased with the way he performed in his last bout — an eighth-round knockout win over John Molina Jr. last year — stressing he's "ready to do it all again" against Francisco Santana.

"He's a tough, game fighter," Lopez said of Santana. "I'm expecting a tough fight as he's got a lot of fight in him. He never gives up, and he'll give me a run for my money."

Even at 36 years old Lopez remains game himself and has one of the best boxing coaches in the world in his corner — Robert Garcia; the former IBF super featherweight world champion who has built a formidable fight club in Southern California.

On the positive changes Lopez has noticed Garcia make, the fighter said: "I put pressure on myself to work harder than I ever have before, but there's intellectual changes, too. I think smarter inside the ring, and work smarter and harder.

"We have some of the best fighters in the world training at the same gym, so the quality of the sparring is another big thing.

"I'm fighting young, top killers in the game. Almost to the point where it comes to fight night, I won't see anybody better than sparring partners."

COVID forced Lopez to make other positive changes in his life, too

Lopez also benefits from a personal chef making nutritious food for him every day.

One of his favorite meals during the wintry months is Caldo de Res, which is a Mexican beef soup with vegetables. "That one hits the spot," he told us.

While getting himself warmed up with the hearty, beef shank soup, Lopez likely looks back at the year he's had as he, like many in the world, was impacted by coronavirus.

The pandemic shuttered the world's major sports leagues from mid-March onwards, and boxing was one of many industries which left participants like Lopez wondering when they will get back to work.

He kept himself fit, but also established a business he'd been thinking about for years.

"I started my trucking business," Lopez said. "It's called Riverside Rocky, for hauling, and it's ready to take off at the top of the year.

"I had a bit of time on my hands, it was something I wanted to do, and I'd been procrastinating.

"I thought it might be a little while until I fight, so if I have time now to get some of the things out the way, then why not.

"I have two trucks ready to run, and I'm excited to get my hauling business going."

Lopez has other business he wants to take care of first.

"I've got to come out healthy in my fight against Santana, but look good as well most importantly," he said.

"Then I want any of the top guys. I'd love a shot at the winner, or the loser, of the main event — Errol Spence Jr. and Danny Garcia. Those are two exciting fights, with two of the best guys there is.

"That would make for a great match," he said.

All he wants to do is keep on trucking.