Stuttgart: Simone Biles' margin of victory hadn't been calculated, but the outcome was clear even before she nailed the final tumbling pass of the world's most difficult floor routine Thursday at the 2019 world gymnastics championships.

With it, Biles clinched her fifth world all-around gold medal. And she celebrated by pantomiming a mic-drop before walking off the tumbling mat, a final flourish of wit and amply deserved self-confidence. 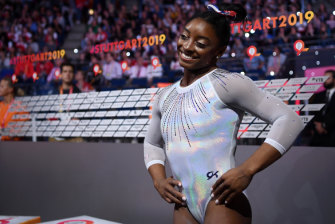 When it comes to Biles' dominance of gymnastics, there is a point at which words fail. Even the most comprehensive thesaurus runs out of adjectives for the sort of excellence she brings to her sport.

In doing so, two days after leading the US women to their fifth consecutive world team championship, Biles extended her career haul of world medals to 22, including a record 16 golds.

"Yes, that's a lot," Biles said with a broad smile, asked about her unprecedented cache of medals. "Sometimes I wonder how I do it; sometimes I feel it's not me. I wish I could have an out-of-body experience to witness it, because sometimes I think I'm going crazy."

Having posted the top marks on three of those four events in Thursday's all-around, Biles, 22, is all but assured of eclipsing Vitaly Scherbo's career record of 23 world medals in what is likely her final world championships.

For 16-year-old Sunisa Lee of St Paul, the youngest member of the U.S. delegation, it was an afternoon of disappointment, but one she insisted she'd learn from. Lee finished eighth among the international field of 24, hurt by an uncharacteristic fall on uneven bars, which is her strength. 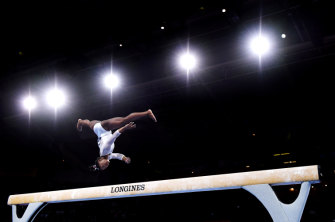 Biles in action on the balance beam during her all-around world title win.Credit:Getty Images

Biles, however, gave judges precious little to quibble about.

Competing in a white sequined leotard, Biles looked evermore like an ethereal angel. And her ability to project weightlessness while doing impossibly difficult gymnastics, as if she truly can fly, is part of her brilliance.

It was fitting that she closed the all-around competition with a floor exercise chocked with skills that she alone can execute to perfection – most notably, the triple-twisting, double-somersault that's the fourth gymnastics skill to bear her name.

Biles had the arena in her hands as she stepped onto the mat.

According to her coach, Laurent Landi, it was a sign of Biles' over-amped exuberance that she stepped out of bounds upon landing what looked like a rocket-propelling triple-double and again at the conclusion of another tumbling pass.

"She is running a little bit too fast, so you forget for a moment about the technique because you [run on] the adrenaline and the pressure and you just do it," Landi said. "She never flies like this in training; only at meets. So she needs to control herself a little bit more."

But Landi proclaimed himself pleased, preferring a super-charged Biles to one who shows fatigue. And given the unparalleled difficulty of Biles' floor routine, minor deductions for stepping out of bounds don't come close to bringing her scores down to mortal realm.

Biles opened on vault, a strength, and showed why she's the reigning world and Olympic champion on the apparatus with the amplitude of her Cheng – an exceedingly difficult skill few women perform. Her score of 15.233 proved highest on the apparatus.

She acquitted herself well on uneven bars, her least favourite event. 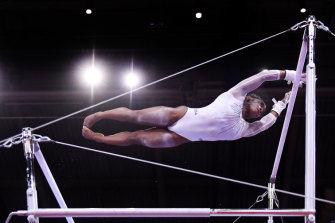 Biles reaches out on the uneven bars.Credit:Getty Images

Lee's bars routine, however, went awry almost at once, with a rare fall. She collected herself and finished but scored 13.330, well below her potential.

On beam, Biles chose not to perform the double-twisting, double-somersault dismount that now bears her name after she became the first to successfully execute it on a world stage in qualifying. She didn't need it, scoring top marks anyway for an already rigorous routine that included just a small wobble or two.

As the final major international competition before the 2020 Tokyo Olympics, the 2019 world championships serve as a bellwether for the upcoming summer Games. Biles is on track to become the first woman in 52 years to win back-to-back Olympic all-around gold medals, since Vera Caslavska of former Czechoslovakia did so at the 1964 and '68 Olympics.

But any parallel to a half-century-old achievement is strained, at best. Today's gymnastics are far more demanding, complex and dangerous.

Credit Biles for pushing those boundaries without being pushed by a rival or young upstart. Biles is competing against her own potential, which is seemingly limitless.

It's extremely rare for female gymnasts to maintain championship form over two Olympic cycles. And it's almost unheard of for those who qualify for back-to-back Olympics to raise their technical level, as Biles has since the 2016 Rio Games, where she won four golds, including the all-around, and a bronze.

"The few athletes that have tried to come back, very often they're repeating the same skills they did four years earlier, which usually is not enough because the sport is continually evolving," said Tom Forster, US women's team coordinator.

"Simone is really, really unique in that sense. I don't think anyone ever has shown up at their potentially second Olympics stronger than their first, if they were the champion. This is a totally different level of competition than the world has ever seen before."

What makes Biles exceptional is a combination of factors. At just 142 centimetres tall, she has remarkable power. She also has impeccable form, which means there's no extraneous motion in her gymnastics. Mentally, she's strong as granite. And despite her mountain of medals, she trains and competes with a hunger that's not sated by past achievements, driven to test her limits and those of the sport.

Liang Chow, former coach of four-time Olympic medalists Shawn Johnson and current coach of China's women's team, said of Biles: "She is absolutely the best I have ever seen."