Three innings into his start on Tuesday, his first since tossing a no-hitter, Corey Kluber exited with tightness in his throwing shoulder. A day later, Yankees Manager Aaron Boone said that Kluber will miss at least two months because of a strained muscle in his right shoulder.

The diagnosis — technically, a strained subscapularis muscle, which makes up part of the rotator cuff — may keep Kluber, 35, sidelined until roughly August, dealing a blow to a starting rotation that trailed only the Chicago White Sox in earned run average in the American League entering Wednesday.

The pitching staff wasn’t the only part of the team saddled with health concerns on Wednesday. Boone announced that first baseman Luke Voit was also headed to the injured list because of a Grade 2 (out of three) strain of his right oblique muscle. Voit was only 12 games into his return from knee surgery that had forced him to miss the first month and a half of the season.

Voit, 30, who led the major leagues in home runs last season, felt something in his side during Saturday’s game against the White Sox. It felt worse on Tuesday and Voit was sent for a magnetic resonance imaging examination on Wednesday, Boone said.

“Obviously he’s frustrated, with all he’s been through just to get back,” Boone said.

Kluber, though, had been healthy this year, a stark change after years of injuries. A workhorse in the Cleveland rotation, Kluber averaged 218 innings a year between 2014 and 2018 and won two A.L. Cy Young Awards. 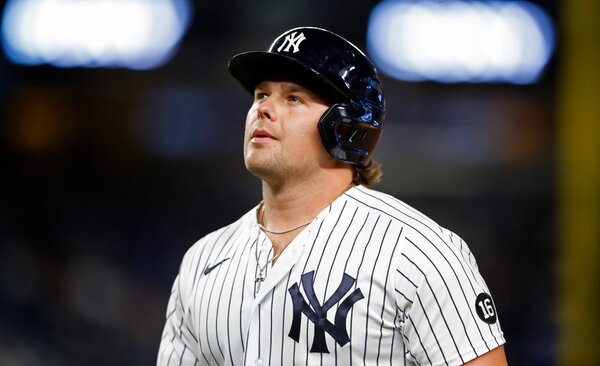 In 2019, he tossed only 35 ⅔ innings because a line drive fractured his right forearm, his pitching arm. And in 2020, after a trade to the Texas Rangers, he logged only one inning because of a different torn muscle in his shoulder. Over the winter, the Yankees made the high-risk, potentially high-reward gamble in signing him to a one-year, $11-million deal, and he had been proving them right.

In their rotation, Kluber trailed only the ace right-hander Gerrit Cole in production. He had a 3.04 E.R.A. over 53 ⅓ innings and tossed the Yankees’ first no-hitter since 1999, on May 19 against the Rangers, his former team.

But before his start on Tuesday against the Toronto Blue Jays, a 6-2 loss, Kluber said he had trouble getting his arm loose, noting that it felt heavy but not painful. After three innings, in which he coughed up two runs and walked three batters, Kluber exited the game.

“You feel like you’re letting the guys down, bailing on your teammates,” Kluber told reporters after the game. “I guess ultimately we were trying to be smart about it and not push through something, risk doing something else.”

On Wednesday, an M.R.I. revealed the source of the problem, and Kluber was sent for a second, more precise examination to ensure nothing else was awry, Boone said. He will be shut down from throwing for four weeks. The right-handers Deivi Garcia, 22, and Michael King, 26, were options to fill Kluber’s innings in the meantime, he added.

“It’s obviously tough news to get considering how well he’s thrown the ball and all he’s been through to get back,” Boone said.

In more encouraging injury news for the Yankees, Boone said designated hitter Giancarlo Stanton, who has been out for two weeks with a left quadriceps strain, may return from the I.L. as soon as Friday.

With the forecast calling for inclement weather, the Yankees postponed Wednesday’s game against Toronto. It was rescheduled as part of a single-admission doubleheader on Thursday.