MONTGOMERY, Vt. — When Elle Purrier St. Pierre was collecting state championships as a high school runner in the upper reaches of rural Vermont, she would join her teammates on jogs with an international flair. They would approach the Quebec border and stick their hands under the fence so they could say they had touched Canada, a modest taste of adventure for a group of small-town athletes.

Purrier St. Pierre, 26, has since emerged onto the global stage, smashing the national record for the indoor mile while setting her sights on competing in the 1,500 meters at this summer’s Tokyo Olympics. Her chance to qualify will come at the U.S. Olympic track and field trials in Eugene, Ore., where preliminary heats for the 1,500-meter are Friday, with the final scheduled for Monday. Three spots are up for grabs.

Yet even as she goes about establishing herself as one of American running’s rising stars, Purrier St. Pierre remains a self-described homebody. She lives with her husband, Jamie St. Pierre, who was her high school sweetheart, at the end of a long gravel road a few miles from her childhood home. She grew up on a dairy farm where she would head to the barn before school each morning to milk about 40 cows. She and her now-husband rode a tractor to the prom.

Every potential Olympian is from somewhere, but only Purrier St. Pierre is from Montgomery — a maple-scented speck on the map where the postal carrier knows her business, the bartender knows her order (Captain and Coke), and everyone seems invested in her Olympic dream.

For her part, Purrier St. Pierre feels driven to excel as a way to justify her curious existence as a professional runner and all the time she has been away from her family.

First, she left for the University of New Hampshire, where she graduated in 2018 as the most decorated athlete in school history. Now, she spends large parts of the year in Boston, where she trains with a team sponsored by New Balance, and in Flagstaff, Ariz., running at altitude. She misses her family. She misses the farm. Her husband and her parents have been unwaveringly supportive. (She has noticed, for example, that her father, Charlie, seems to choke up whenever he talks about her with reporters.)

“But I have to make the sacrifice worth it,” she said.

It is difficult to overstate Purrier St. Pierre’s celebrity in Montgomery (population: 784), which considers itself the covered bridge capital of the world (seven). Fame for Purrier St. Pierre comes in the form of joggers who stop her mid-run for photographs; the large assemblies she addresses whenever she makes appearances at area schools; the viewing parties for her important races; the letter carrier who proudly informs her that he and his wife have signed up for their first 5K; and the friendly clerk at the Tractor Supply who asks Annie Purrier whether she is “the mother of that runner.” 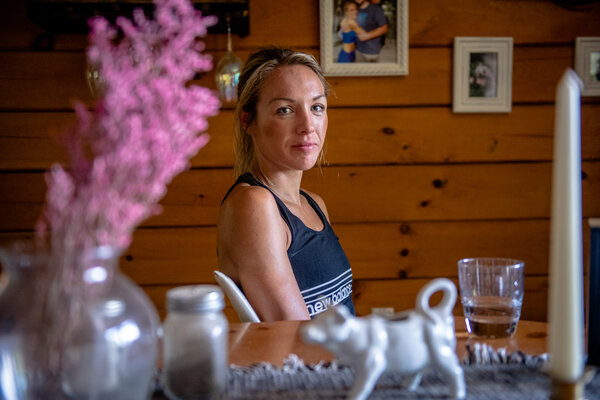 “I think people are excited that they know someone they consider to be famous,” Charlie Purrier said.

Heather MacLean, a training partner from Team New Balance Boston, got the full Purrier St. Pierre experience when she made her first visit to Montgomery a couple of years ago. At the time, Purrier St. Pierre’s car was in the shop, so she wound up driving MacLean around in a truck with a snowplow bolted to its front end.

“She thought that was hilarious,” Purrier St. Pierre said.

MacLean also helped with a few chores, which included shoveling manure. Her reward was a trip into town for refreshments at the Snow Shoe Lodge & Pub — “I walk in and they pour me a drink because they know what I want,” Purrier St. Pierre said — and MacLean felt like her entourage. The local citizenry is clad in a disproportionate amount of running gear from Purrier St. Pierre’s sponsors.

“She’s always getting shoes for people,” MacLean said. “She’ll be like, ‘Oh, these are for the woman who used to babysit for us.’”

“Elle,” MacLean told her, “you don’t need to get everybody shoes.”

Purrier St. Pierre, whose 5-foot-3 frame buzzes with compact power, often goes about her business on the quiet roads and trails that wind through Montgomery and nearby Berkshire, where she now lives with her husband and their German shepherd, Maya, though she also has a workout room that is outfitted with a top-of-the-line treadmill and a trove of mementos. Plaques and trophies from her days at New Hampshire, where she was an 11-time all-American and a national champion in the indoor mile, are crammed onto a bookcase.

But there is more, including the framed cast-iron pan she took home for winning the “skillet toss” (preteen category) at the Lamoille County Field Days in 2005 and purple ribbons for first-place finishes at the Vermont State 4-H Dairy Show. Growing up, she would also show off some of the family livestock at the Champlain Valley Fair, where the opposition often featured a young boy from a neighboring farm.

“Elle would always finish first or second, and I’d be near the back,” said Jamie St. Pierre, who studied dairy management at Cornell before returning to Vermont to help run his family’s farm. “You had to get your cow all polished up and get the hair clipped perfectly, and that wasn’t my cup of tea.”

Purrier St. Pierre was reminded of competing at the fair when she was doing some work in the barn not too long ago, and she caught a whiff of fresh sawdust. There was always fresh sawdust at the fair, and back then, the scent would trigger something inside her — a mix of nerves and excitement, along with a desire to win. She gets the same feeling now whenever she approaches the start of a race.

It was not until she was a freshman at Richford High School that her innate talent revealed itself. She went out for girls’ basketball and dominated a preseason time trial in the mile. She later joined the track team, then ran cross country the following fall. It turned out that she was a natural, even if she was not enamored with the general concept of running long distances.

“I didn’t like it at all,” she said. “I liked that I was good at it, but I didn’t understand it. It was just something that I was doing.”

Richard Flint, one of Purrier St. Pierre’s high school coaches, saw her potential. He would trail her in his truck on runs, which drew the attention of the Border Patrol on at least one occasion. “When they pulled him over, he told me to keep running,” Purrier St. Pierre said.

She began to take the sport more seriously, she said, when she realized that she could earn a college scholarship. But even as she asserted her dominance, winning state title after state title, her training never exceeded 30 miles a week, she said — a relatively light total, even for someone her age.

At New Hampshire, she continued to be measured with her approach, gradually building her weekly mileage from 40 as a freshman to 50 as a sophomore. In the process, she said, she largely avoided injuries and never experienced the sort of burnout that has caused problems for other runners. She also discovered the joy of running, drawing on the camaraderie she felt among her teammates.

But because she had never been obsessed with the sport, she was, in a way, blissfully naïve: about the swelling expectations that others had for her, about her achievements, about her increasingly high-level competition.

“It’s been to my benefit,” she said, “because you’re just racing. You’re not scared of anyone.”

She recently came across a photograph of herself on the start line before one of her big races when she was still in college, and she was struck by the quality of the other runners, many of whom were pros. At the time, she had no idea who any of them were.

“And now I’m looking at them all, and I’m like, ‘Wow, how did I not freak out before that race?’” she said.

Purrier St. Pierre is more seasoned now but no less fearless. Breakthroughs have come in quick succession. In 2019, she placed 11th in the 5,000 meters at the world championships, setting a personal best with a time of 14 minutes 58.17 seconds. She followed that up in February 2020 by running 4:16.85 for the indoor mile at the Millrose Games, breaking a national record that had stood for nearly 38 years.

When the pandemic postponed the Olympics, Purrier St. Pierre was disappointed but took advantage of the extra year to add even more mileage to her training. In February, she set another national record — this time in the indoor 2-mile. And last month, she ran one of the fastest 1,500 meters in the world this year.

And her gutsy style has influenced teammates like MacLean who described herself as more of a “cautious” runner by nature.

“But I train with this person every day,” MacLean said, “so it’s easier to believe in yourself when she’s going out there and going after it. It’s inspirational.”

Last September, Elle and Jamie were married in Elle’s parents’ front yard, where about 150 guests waited through a rain shower before the skies cleared. Because of coronavirus restrictions that prohibited large indoor gatherings, the reception was held outside the St. Pierre family sugar shack, where libations flowed from the freshly chopped trunk of a maple tree that had been outfitted with a beer tap.

Purrier St. Pierre, who says farming life has shaped who she is as an athlete, is particularly fond of the dairy industry. She counts Cabot Cheese among her sponsors.

“If I put oat milk in our shared fridge, I feel like she takes personal offense,” MacLean said.

As part of her preparation for the trials, Purrier St. Pierre spent several weeks in Flagstaff, where she feels like she has too much time on her hands. But sitting around is a piece of the equation for world-class runners. The problem is that resting seems antithetical to Purrier St. Pierre’s personal code.

“We’ll be watching ‘Game of Thrones’ or something on repeat in the living room,” MacLean said, “and she’ll be like: ‘I can’t sit here. I’m going to Target.’ ”

Whenever Purrier St. Pierre is back in Vermont and feels the tug of wanting to chip in with some old-fashioned manual labor, her family has to tell her to cool it.

“And I know I have to back off sometimes,” she said, “because I’m still running like 80 miles a week.”

She says she hopes to compete through at least two Olympic cycles. She understands that the pull of home will always be there. She has learned to cope.

“Growing up on a farm, I just feel like you always have this sense of responsibility,” she said. “It’s the family farm, so it’s a family responsibility, and my brother and my sister are both nearby. So it’s kind of like I’m the odd one out, and I’m in debt to my family because I’ve been gone for so long and I’m not here to help.”

Her family, of course, wants her to run for as long as she can. A community is behind her, watching her go further and faster than anyone could have imagined.