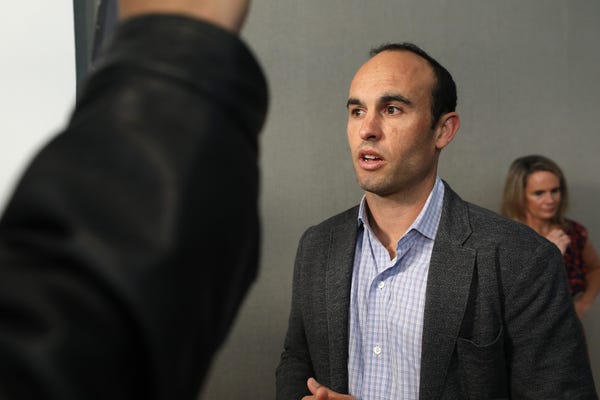 USMNT legend Landon Donovan and his San Diego Loyal players walked off the field and forfeited their match against the Phoenix Rising on Wednesday in protest to an alleged homophobic slur made towards midfielder Collin Martin.

Protests erupted late in the first half of the USL Championship match after a Phoenix player was accused of abusing Martin, who is gay, which resulted in Donovan being shown a red card for entering the field to confront the referee.

San Diego players returned to the pitch after half time, however only to take a knee before walking off.

"If they're not willing to act, then we have to act," Donovan, whose side was leading 3-1 at the time it forfeited, said after the game, according to the BBC.

"Our guys, to their immense credit, said we were not going to stand for this. They were very clear in that moment that they were giving up all hopes of making the play-offs, even though they were beating one of the best teams in the league.

Donovan's side also forfeited a match against Los Angeles Galaxy II on September 23 after midfielder Elijah Martin was the victim of an alleged racial slur. Against the Galaxy, the Loyal completed the match, before forfeiting afterwards, rather than during the game.

The accused Galaxy player has since been let go by the club, reports The Telegraph.

"We went through a really hard incident last week in the LA match," Donovan continued.

"And we made a vow to ourselves, to our community, to our players, to the club, to USL, that we would not stand for bigotry, homophobic slurs, things that don't belong in our game."

Phoenix Rising said the player accused of making the homophobic comment towards Martin "vehemently denied" the allegations, according to the BBC.

The USL Championship said it in a statement that is was aware of the incident and an investigation was now under way.