The A-League is often unfavourably compared to the burgeoning MLS in the United States.

Many MLS teams play in soccer-specific rectangular stadiums to which they have sole access. 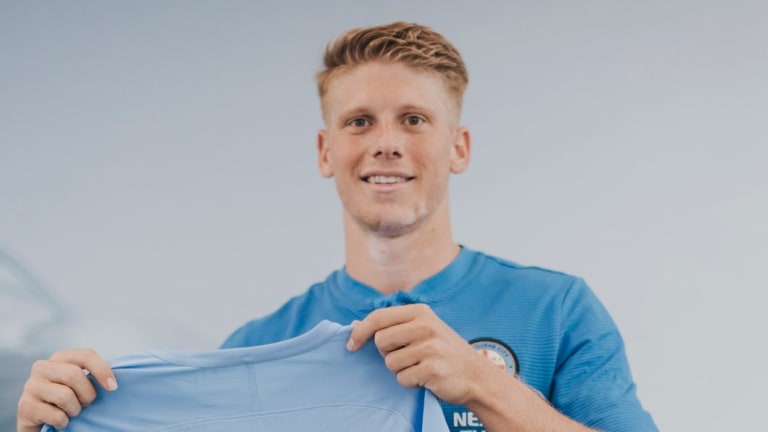 Harrison Delbridge rates the quality of the A-League.Credit:Melbourne City FC

He says there is a greater gulf in quality between the top players in a team's squad and the lower layers, which means the Australian league is more competitive.

''I have been here a year now, and I have been lucky enough to play most of the first team games this season and I would say this league is underrated compared to the MLS. I think it is better than the USL Championship.

''We had a good Cup run with FC Cincinnati and played against a lot of the top MLS teams,'' he said, reflecting on Cincinnati's run to the semi finals of the US Open Cup when they beat Columbus Crew and Chicago Fire in the early rounds.

In that semi-final, the second-tier outfit was beaten only in extra time by MLS side New York Red Bulls, former Premier League striker Shaun Wright-Phillips netting the winner in the 101st minute.

Delbridge played the whole 120 minutes of that game and says the whole experience gave him an insight into MLS quality.

''I think here there is less of a gap between the top teams and the bottom teams here. I also think the brand of football is underestimated. More teams keep possession and try to use the ball better.''

Such views may come as a surprise, but Delbridge is himself something of a surprising player to have arrived at Melbourne City.

The move came last year when his agent had discussions about potential interest from New York City, the Australian club's American ''sister team''.

''He asked me if I would be interested in coming to Australia to play for Melbourne City in the A-League and I jumped at the chance,'' said Delbridge.

The 26-year-old was born in Sydney and lived in Brisbane until he was aged 10. His father Andrew worked in the advertising industry while his Melbourne-born mother Shelley was a copywriter and they relocated to North Carolina when Delbridge and his brother and sister, Quinn and Taylor, were youngsters.

''They moved to California when I was about 20, so I was playing in LA and then at Sacramento after college. I was pleased to get the chance to come back to Australia and live and play here.''

This season injuries to centre backs Iacopo La Rocca and Osama Malik have given Delbridge the chance to establish himself.

While the Bruno Fornaroli issue has hung over City for the past few weeks it is not something the players pay attention to, he said.

''As players we don't have time to stop and stress about things. Everybody at the club gets along with Bruno and likes him, but we have to concentrate on our own jobs and I think as a team we have managed to respond well to what could have been a stressful situation.

''When you are getting results in games you feel positive. In the last three weeks we have beaten last year's grand finalists and this year's FFA Cup winners on their own ground, so we can take confidence from that.''

Looking to Saturday's pre Christmas derby, he said: ''Victory have some great players. Kosta Barabarouses is quick and skilful, [Keisuke] Honda plays passes from all over the field, and Ola Toivenen is big and good on the ground. But we beat them in round one, so we don't need to fear them.''