Congratulatory posts flooded social media on Monday when Las Vegas Raiders defensive lineman Carl Nassib announced on Instagram that he is gay, becoming the first active N.F.L. player to do so.

Jerseys and T-shirts bearing his name were the top sellers among all N.F.L. players on Monday, according to Fanatics, the league’s e-commerce partner. Stars like Giants running back Saquon Barkley — who played with Nassib at Penn State — and Arizona Cardinals defensive end J.J. Watt quickly voiced their support for Nassib on Twitter. Well-known advocacy organizations praised his declaration as monumental.

“I think people are going to see what I’ve seen for years, that sports are a lot more accepting than people give it credit for,” said Cyd Zeigler, the co-founder of Outsports, a news website that covers L.G.B.T.Q. athletes and issues in sports.

Yet Nassib said in his post that he had “agonized” over the decision to go public about his sexuality, after keeping it to himself for 15 years. That he is the only active player who is publicly out in one of the four major American men’s pro sports leagues suggests the height of the barrier that male athletes face openly acknowledging a gender or sexual identity that doesn’t conform with those traditionally tolerated in locker rooms.

Other gay athletes who have gone public with their sexuality have said they felt pressured to suppress it — and may still despite currents in society shifting to more acceptance — for simple yet powerfully prohibitive reasons. In locker rooms, on fields and on courts, male athletes are taught to embrace heteronormative standards of masculinity. 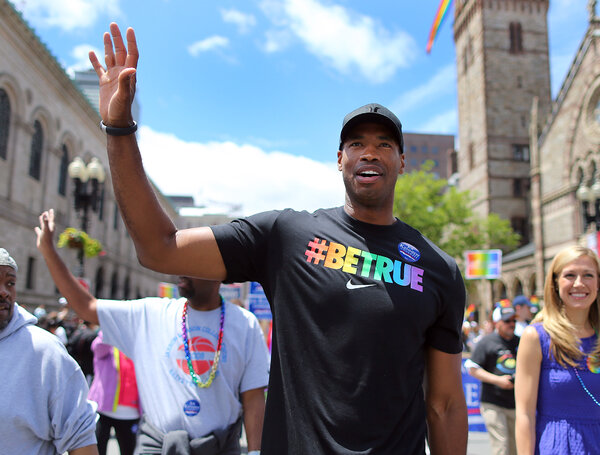 “I think it’s men and the machismo culture that pro sports are played, in particular,” that has inhibited men who identify as gay, bisexual, or queer from coming out, said Richard Lapchick, the director of the Institute for Diversity and Ethics in Sport.

Still, some male athletes ventured to do so despite concerns about their safety and backlash from teammates and fans. In February 2014, the N.B.A. became the first of the four major American sports leagues to have an openly gay active player when Jason Collins, who had come out publicly the previous spring, joined the Nets. He retired from playing later that year.

Michael Sam, who had been an all-American selection during his college career as a defensive end at Missouri, announced that he is gay weeks ahead of Collins’s signing, in the lead up to that year’s N.F.L. draft. The Rams selected him in the seventh, and last round, and an overjoyed Sam cried and kissed his boyfriend on national TV in one of the most visible displays of gay male sexuality in the history of sports.

But the Rams cut Sam before the end of training camp. The Dallas Cowboys then signed Sam to their practice squad, but he did not play in a regular season game. He retired from football in 2015.

Intermittently, a handful of other notable male professional athletes made announcements about their sexuality throughout the years only after their sports careers had ended. But in the mid-aughts the stream of male former players to publicly come out as gay quickened, seeming to herald a shift in sporting culture. Athletes like the former N.B.A. player John Amaechi (2007) and retired N.F.L. players Wade Davis (2012) and Kwame Harris (2013), publicly announced that they are gay in memoirs, magazine cover articles and, in Harris’s case, in a CNN interview.

Major League Soccer has had two active openly gay players — Robbie Rogers, who came out in 2013, and Collin Martin, who did so in 2018.

In Major League Baseball, Glenn Burke, an outfielder who spent four seasons with the Los Angeles Dodgers and the Oakland Athletics in the 1970s, is known as the first player in major league history to come out to his teammates during his career. He came out publicly in 1982, three years after his last major league game. Burke, who died of AIDS complications in 1995, was supported by some teammates but was largely met with discrimination.

The momentum for other gay male N.F.L. athletes to come out while they were still playing may have dwindled when Sam’s career fizzled out before it began. Nassib’s announcement may have been more readily accepted — publicly, at least — among his peers because he is already a dependable veteran.

Nassib has already played five seasons in the N.F.L. and has kept a relatively low profile at an unglamorous, but important, position. Drafted by the Cleveland Browns, he has appeared in 73 games, starting in 37 of them while recording 143 tackles.

Being labeled a “distraction” has long been a stigma assigned to players who espoused any view or identity that stood out from their teammates, but there’s an upside to Nassib’s increased fame, Zeigler said. His visibility could offer more chances to discuss topics surrounding L.G.B.T.Q. athletes.

“Tons of people are going to be talking about this over the next couple of days, then again when he shows up for his first game and then again when he intercepts the ball and runs it back for a touchdown,” Zeigler said. “Teams and players can handle a couple of extra cameras. This will be here for a while.”

Men’s pro teams in America have lagged behind women’s, where L.G.B.T.Q. stars in team and individual sports have publicly identified themselves and still been celebrated. W.N.B.A. stars Diana Taurasi, Brittney Griner and Elena Delle Donne are among the league’s current players who have come out as lesbian and Layshia Clarendon, who openly identifies as transgender and nonbinary, in January became the league’s first player to have a top surgery while active.

The outspoken United States Women’s National Team soccer star Megan Rapinoe, who is engaged to the W.N.B.A’s Sue Bird, said after a Women’s World Cup match in 2019 that “you can’t win a championship without gays on your team.” That year’s World Cup included more than three dozen players and coaches who are gay, in fact, and the winning United States team had at least one couple among its members.

In the Ultimate Fighting Championship, the highest-caliber mixed martial arts promotion, the best female fighter of all time, Amanda Nunes, is an out lesbian.

In contrast to L.G.B.T.Q. male athletes, their out peers in women’s American sports leagues have enjoyed more acceptance from the public and from their heterosexual teammates in recent years. Rapinoe and Bird are among the most popular and marketable female athletes in the world. In Nunes’s last fight in March, she brought her infant child and fiancée inside the octagon after defeating her opponent.

According to Taylor Carr, chief of staff at Athlete Ally, an advocacy organization for L.G.B.T.Q. athletes, that could owe to a greater sense of camaraderie in women’s sports brought on by other collective social fights. Female athletes have for decades fought for equal pay, and the W.N.B.A. prominently led in many social justice causes, including a successful campaign by Atlanta Dream players to oust the team’s owner, the Republican former senator Kelly Loeffler of Georgia, after she opposed the Black Lives Matter movement the league’s teams were supporting.

“When you have all of these people in women’s athletics who are sending very clear signals about what they believe, it makes you feel like ‘I have the ability to compete and live as my personal self,’” Carr said. ‘“I am not just an athlete, I can bring my entire self to the court.”

There are signs of Americans’ growing acceptance of L.G.B.T.Q. people, a cultural shift that may encourage other gay, bisexual and queer male athletes to come out publicly. Seventy percent of respondents in a Gallup poll conducted this year said they support same-sex marriage, a 10 percent jump from 2015 when the Supreme Court ruled that all states must recognize those unions. Nearly 6 percent of respondents in a 2020 Gallup poll identified as L.G.B.T.Q., a 1 percent jump from 2017.

It may take longer for that sea change to erode homophobic attitudes in male sports leagues, particularly the N.F.L. Players have previously faced backlash for offensive comments, some made in the immediate aftermath of a high-profile athlete publicly identifying as gay.

The former Miami Dolphins receiver Mike Wallace posted on Twitter after Collins’s announcement in 2013 that he didn’t understand why with “all these beautiful women in the world and guys want to mess with other guys.” Wallace later apologized and deleted the post.

San Francisco running back Garrison Hearst apologized in 2002 for using a slur and saying he wouldn’t want a gay player as a teammate after the retired Minnesota Vikings player Esera Tuaolo publicly came out as gay that year. Hearst’s comment elicited public apologies from the 49ers’ team owners and then-head coach Steve Mariucci, but no penalty from the league.

For its part, the N.F.L. has made efforts to publicly support L.G.B.T.Q. inclusivity. The league sponsored a float in the 2018 and 2019 New York City Pride Parades, participated in promotional efforts during Pride Month in June like changing official social media avatars to include rainbows, and supported the You Can Play Project, which provides resources to encourage inclusivity in youth sports.

Troy Vincent, the executive vice president of football operations, wrote an essay last year in which he argued that the N.F.L. was ready to welcome its first openly gay player. The league’s official social media accounts, including the Raiders’, responded to Nassib’s video with heart icons.

Lapchick, who has studied gender and hiring practices in major sports leagues for over 25 years, noted football’s changing cultural landscape. “If you told me five years ago that the N.F.L. and individual teams would use hearts in their communications, I wouldn’t have guessed that,” he said. “Especially among men, there was a fear of coming out, and he broke that fear. I think the reaction will show other N.F.L. players that they can do this, too.”