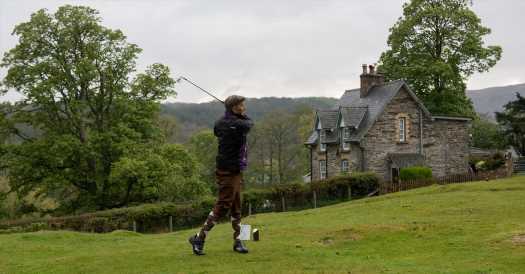 On Friday evening, Chris Powell and 23 locals stood in a field roughly a mile from his home in the rolling hills of Rhayader in Mid Wales. All around the group, familiar features dotted the landscape — from a winding series of public footpaths to gorse bushes, patches of bracken and a centuries-old stone cottage.

But among the greenery there were some new additions: flags, yardage markers, tees, bicycle tires that had been painted red and placed on the ground and a selection of golf bags.

While others in Britain spent the past year or so navigating coronavirus lockdowns and picking up indoor hobbies, Powell estimated that he had spent roughly 1,000 hours roaming this land that was once his town’s local golf course — a site that closed more than five decades ago and has slowly been melding into the landscape ever since. 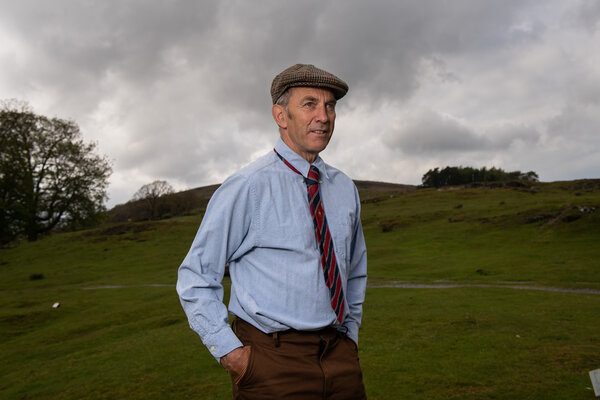 Thanks to Powell’s dedication to discovery and his skills as a one-man renovation team, he managed not only to identify all of the previous tees and greens, hidden among the hills and foliage, but also to repair the course to a playable state. There were surprises along the way, too — like the discovery of ties to a certain course in Augusta, Ga. — and now he and the group were ready to tackle the Rhayader Golf Links once more.

“Once I get into something, I’m very obsessive,” Powell, 63, said before teeing off, dark rain clouds rolling through the surrounding valleys.

The journey to this point started more than a year ago, when Britain was facing its first lockdown and Powell and a friend decided to take to the hills as part of their permitted exercise.

A quick search for Rhayader (pronounced Rei-eder, similar to Ryder Cup) reveals a quiet town, of roughly 2,000 residents, known for its trout fishing, hiking routes, nearby Elan Valley dams and one of the highest pubs per capita figures in the United Kingdom.

But golf can be found within this DNA, too. According to the website Golf’s Missing Links, which documents more than 2,000 courses that have been lost to time and the landscape, a nine-hole course first existed in Rhayader from 1908 until its abeyance around the time of World War I. Then, in the mid-1920s, a new nine-hole course was opened on a separate site about a mile from the town center, eventually closing in 1968. Another course on a third site failed in the 1990s, shutting after a few years.

Powell remembers parts of the defunct second course from his youth, when he would trek over the hills with his pony. “Ever since I was a kid I’ve always been fascinated by man-made stuff,” Powell, a farrier, said. “So if I’m walking over hills, I’m always fascinated by, say, an old house, and I always want to know, What did that used to be like? Or, Where was that room? Where was the pig sty?”

On their first visit to the old links site last year, Powell and his friend, Martin Mason, 53, said they could clearly make out two greens. From there, Powell returned every few days, walking through fields and ferns in the hope of finding new features among the bracken, which, he said, was at chest height in places.

Within a couple of months, Powell had unearthed around five or six greens and a similar number of tee boxes. At that point, he said, he remembers thinking, “I am going to run a charity golf day” in a year’s time.

“He wanted to make it playable for people who’ve not been up there,” Mason, who occasionally helped during the discovery process, said. “We didn’t know where this was leading.”

In order to find the final holes, Powell turned to a local undertaker, who had played the course when he was younger and was able to give Powell rough reference points on the hillside, which is often used by mountain bikers. He and Mason were able to discover some of the original cups using a metal detector. They also worked off an old course map that they had found online, which threw up a familiar name within golfing circles: “Laid out as planned by Dr. A. MacKenzie, Golf Course Architect.”

Dr. Alister MacKenzie was a British golf course architect whose work spanned four continents. Within the past 10 years, three MacKenzie courses — Cypress Point Club in California, Royal Melbourne Golf Club in Australia and Augusta National Golf Club in Georgia, the home of The Masters — have been ranked in the top 10 in the world.

“I was pretty surprised, I have to say,” Powell said.

Powell also discovered a newspaper article from 1925 that listed MacKenzie as the architect, and a roughly 90-year-old guidebook that documented the designer’s observations while at the site (“I have attempted to reduce the hill climbing to a minimum”). But various societies tied to MacKenzie’s courses show no recognition of Rhayader online — mainly because, members said, affiliation is only for active courses, and online chronologies document MacKenzie being in X location on Y date, rather than simply listing courses he may have worked on.

Powell didn’t mind, though. He kept working on his antithesis of the pristine Augusta National course, hoping to one day host a round in the Welsh hills. He purchased a riding mower to tackle the remaining bracken. Some nights he walked the hills hitting balls, which, when they would become lost on the fern-covered fairways, he would retrieve using a sickle.

In late April, Powell was presented with an opportunity: the previous year’s bracken had died down, giving him a few weeks when the remaining dead ferns could be cleared from key sections of the course, making it somewhat playable before the ferns grew back.

On Friday evening, players found smaller touches, too. There were scorecards and directional signs that Powell and his wife had made. Holes had been given names, like “Moonshot,” where the drive was high and blind, and “Rollercoaster,” requiring players to drive into a valley and then play back up toward the green. All entry fees would be sent to causes supporting the National Health Service.

“It will be rough and ragged,” said Ben Waters, 36, the course manager at nearby Llandrindod Wells Golf Club where Powell now plays, who had advised him during the previous months. “But that’s not the point. This has been one man working on a hillside in his spare time.”

Over roughly four hours, players trekked across the countryside and, in the case of the first hole, over the outline of an abandoned quarry. They were each armed with a hand-drawn course map, made up of straight black lines and occasional red X’s, which, according to the index, meant “DEEP BRACKEN.”

On blind holes, players were required to ring horseshoes that Powell had set up to alert the group behind that it was safe to hit. Greens were lumpy and the standard of “a lawn, at best,” Powell said, so hitting into a red ring around the flagstick counted as sinking a shot. One hole also required players to climb a fence to reach the tee. The first group out were soaked by a swift rain shower.

By the time the final group had finished, the sun had set and it was getting dark. Players were met with homemade snacks underneath a cabana, and the Rhaeader Cup — to use the Welsh spelling, Y Rhaeader, meaning “The Waterfall” — was presented to the winning team. Powell hoped the charity round could become an annual event.

“The most upsetting part is that it will be completely unplayable again in another month,” he said.

Nature will eventually reclaim the course and Powell’s labors of love. But something more lasting would come of his efforts.

Neil Crafter is a golf course architect from Adelaide, Australia, who has quietly been researching and documenting MacKenzie’s work for more than 20 years.

Despite Rhayader not being listed as an active MacKenzie course or in any sort of official chronology, the course map featuring his name and the newspaper article referencing Rhayader as being the designer’s work “match my guidelines” for it to be recognized, Crafter, 63, said last week.

By “identifying his formula” for hole descriptions over the years, Crafter said he felt comfortable declaring that observations attributed to MacKenzie in the local guidebook read like a “classic MacKenzie course” — taking into account chosen words, references to drainage and the choice to lay out a course at one with the landscape.

Crafter is nearly finished writing a series of books on the more than 250 MacKenzie courses he has studied over the years. These will include chapters on active courses, defunct courses and some that were never made — Augusta National, Royal Melbourne, Cypress Point and, yes, Rhayader Golf Links, whose biography Crafter has already written.

He offered to read out the final line of that chapter.

“Uniquely, the land the course was laid out on remains open farmland today and evidence of MacKenzie’s old greens, tees and bunkers can be clearly seen,” Crafter said.