Following months of speculation, Rihanna has confirmed she did indeed turn down an offer from the National Football League to headline the Super Bowl LIII halftime show in February. And her reason was Colin Kaepernick.

“Absolutely. I couldn’t dare do that. For what? Who gains from that? Not my people,” Rihanna told Vogue magazine when asked if she turned down the offer in solidarity with the former San Francisco 49ers quarterback.

“I just couldn’t be a sellout. I couldn’t be an enabler,” Rihanna said in an interview published Wednesday. “There’s things within that organization that I do not agree with at all, and I was not about to go and be of service to them in any way.”

ABC News has reached out to the NFL but a request for comment was not returned.

The Grammy-winning pop star has been a vocal supporter of Kaepernick, who was propelled into the national spotlight on Aug. 14, 2016, when he became the first NFL player to take a knee during the playing of the National Anthem to protest racism and police brutality.

Kaepernick has not played in the NFL since 2016.

In 2017, Kaepernick filed a grievance against league owners, alleging that they colluded to ensure that he remains unsigned. The lawsuit was settled in 2018.

The hip-hop star Cardi B has also said publicly that she passed on the offer to perform at Super Bowl LIII in Atlanta in a show of support for Kaepernick.

She told the Associated Press earlier this year that she had “mixed feelings” after she declined an offer to perform at Super Bowl LIII in Atlanta.

“I got to sacrifice a lot of money to perform,” she said. “But there’s a man who sacrificed his job for us, so we got to stand behind him.”

Although they faced some backlash, Maroon 5, Travis Scott and Outkast’s Big Boi ended up performing.

Kaepernick’s protest sparked a movement, with several other athletes from various sports following his example — the first of which was then-teammate Eric Reid.

Although the protests have quieted down since a surge in 2017, they are not over.

Earlier this summer, Jay-Z came under fire from supporters of Kaepernick and critics of the NFL after the hip-hop mogul and his label, Roc Nation, teamed up with the league on a new initiative to amplify social justice. 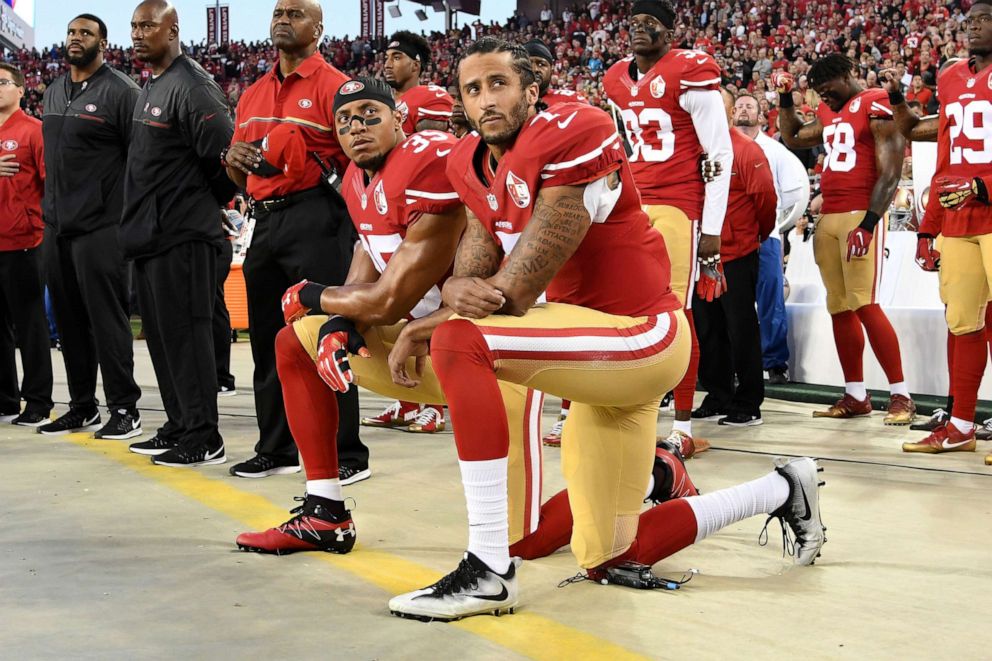 Jay-Z, who has supported Kaepernick and the protests, defended the partnership during a press conference with NFL Commissioner Roger Goodell, saying he was “not minimizing” the protests but added that they were “not about a job,” but about “injustice.”