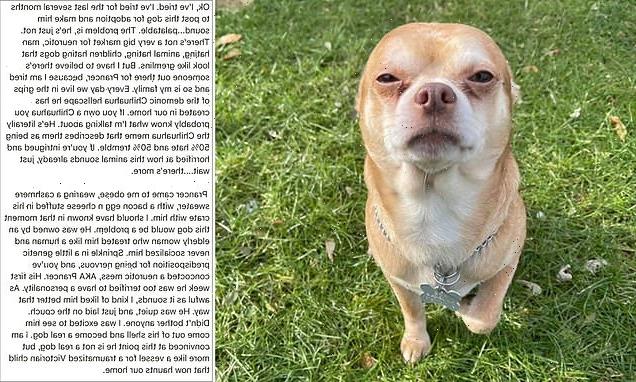 Foster owner looking for a forever home for a ‘demonic’ chihuahua goes viral with VERY honest post describing him as a ‘man-hating, child-hating’ dog who ‘looks like a Gremlin’

A woman went viral with a hilarious adoption call for a ‘neurotic’ Chihuahua who hates men and other animals.

Tyfanee Fortuna, from New Jersey, is fostering the pup named Prancer, two, but hopes to find him a forever home.

Her Fecebook post advertising Prancer has gone viral, as she admitted there is no way to make him sound ‘palatable’.

She went on to say the pup had turned her home into a ‘demonic Chihuahua hellscape’ and wouldn’t live with men, other animals nor children, only suitable for a single woman, a Lesbian couple or a mother and daughter household.

Her post was reshared 44,000 on Facebook and many volunteered to take the Chihuahua home, saying he was their ‘dream dog.’ 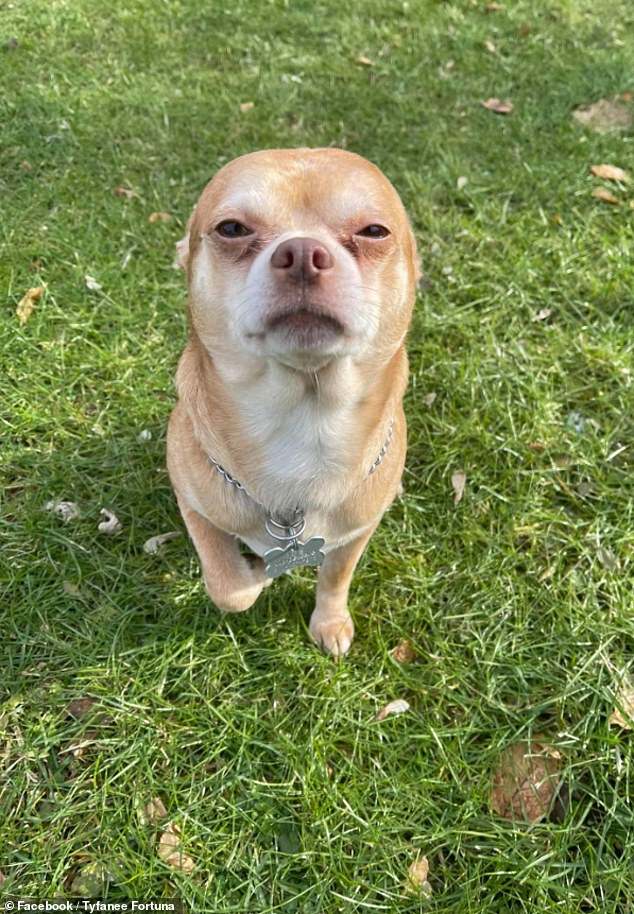 Prancer. a two-year-old Chihuahua from New Jersey is looking for a forever home. But his brutally honest foster owner Tyfanee Fortuna admitted he hates men, children, and other animals 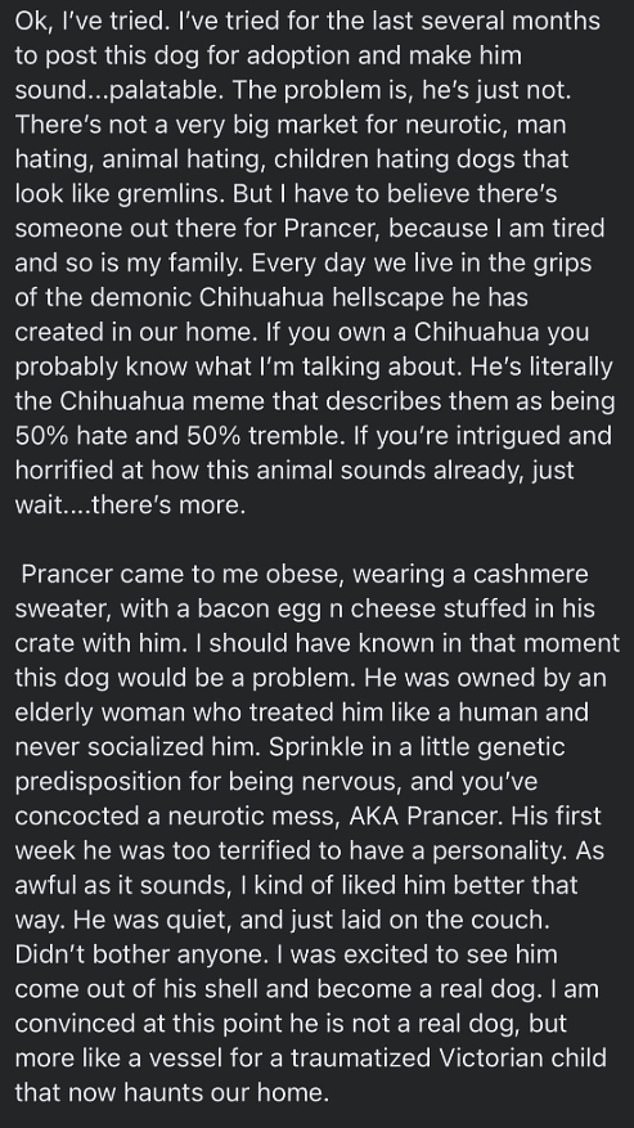 ‘Ok, I’ve tried. I’ve tried for the last several months to post this dog for adoption and make him sound…palatable. The problem is, he’s just not,’ Tyfanee started, adding she and her family were tired.

‘Every day we live in the grips of the demonic Chihuahua hellscape he has created in our home..’ she said.

‘If you’re intrigued and horrified at how this animal sounds already, just wait….there’s more.’

Tyfanee then went into more details about Prancer and how he had ‘adapted’ to his life in her home. 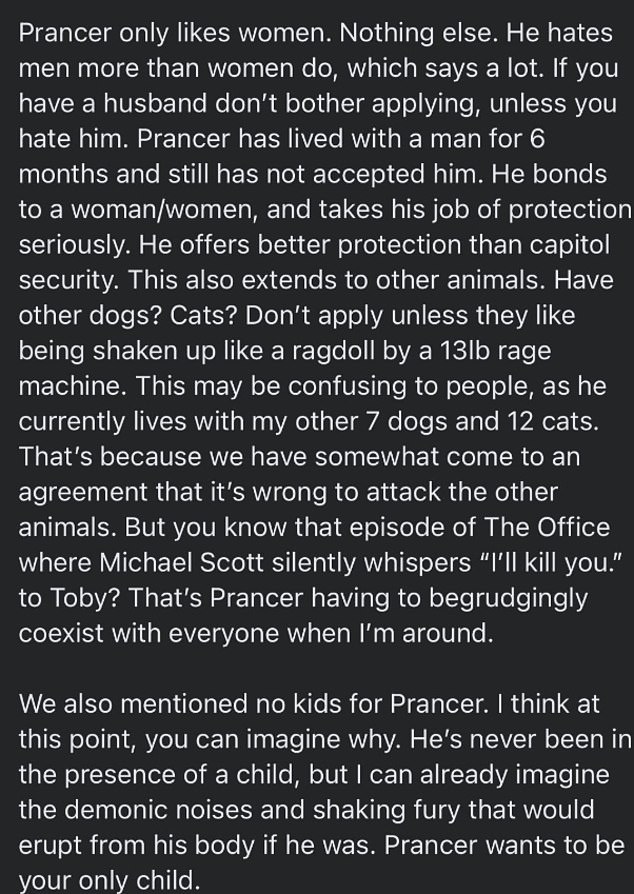 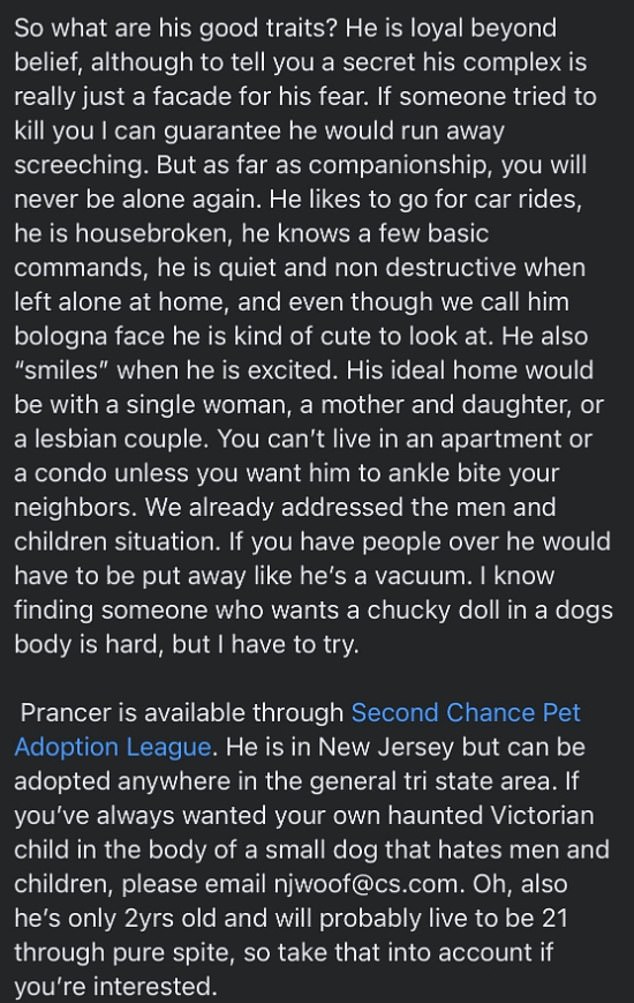 In spite of his particularities, Tyfanee said Prancer had good qualities and was house trained, but said he was a ‘vessel for a traumatized Victorian child’ 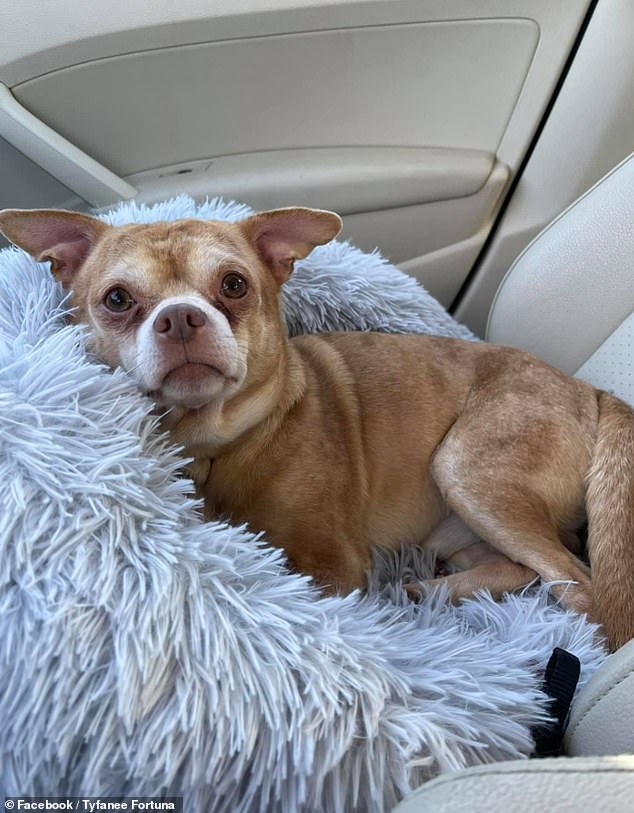 Tyfanee revealed Prancer, pictured, was obese when she started fostering him and ‘was too terrified to have a personality’

‘Prancer came to me obese, wearing a cashmere sweater, with a bacon egg n cheese stuffed in his crate with him. I should have known in that moment this dog would be a problem,’ she wrote.

‘He was owned by an elderly woman who treated him like a human and never socialized him.

‘Sprinkle in a little genetic predisposition for being nervous, and you’ve concocted a neurotic mess, AKA Prancer,’ she added.

She said that during his first week at her house, Prancer was ‘too terrified to have a personality’ and laid silent, but turned out to be a force to be reckoned with. 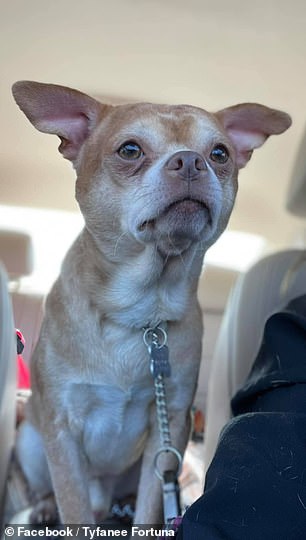 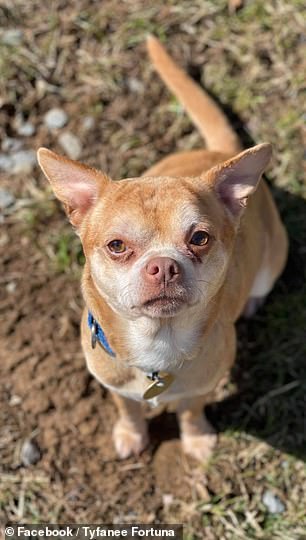 Prancer, pictured, was never socialized by his former owner and for this reason, dislikes children, men and other animals 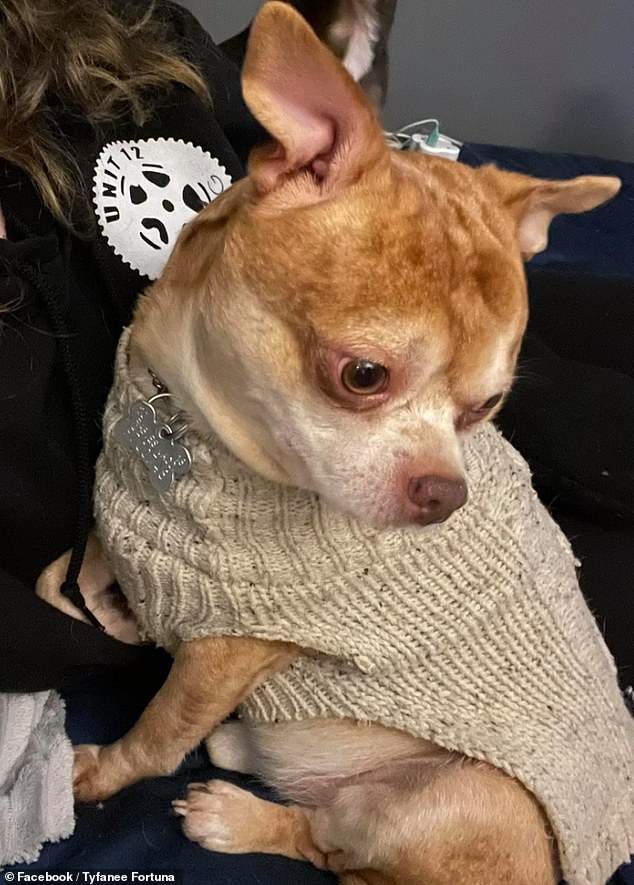 Tyfanee said the poor pup, pictured, came to her in a ‘cashmere sweater’ and took some time to get out of his shell

‘I am convinced at this point he is not a real dog, but more like a vessel for a traumatized Victorian child that now haunts our home,’ Tyfanee said.

She went on to say Prancer hated men and only stood women.

‘He hates men more than women do, which says a lot. If you have a husband don’t bother applying, unless you hate him,’ she said.

He bonds to a woman/women, and takes his job of protection seriously. He offers better protection than capitol security,’ she added.

And on top of hating men, Tyfanee revealed the pup also hated other animals. 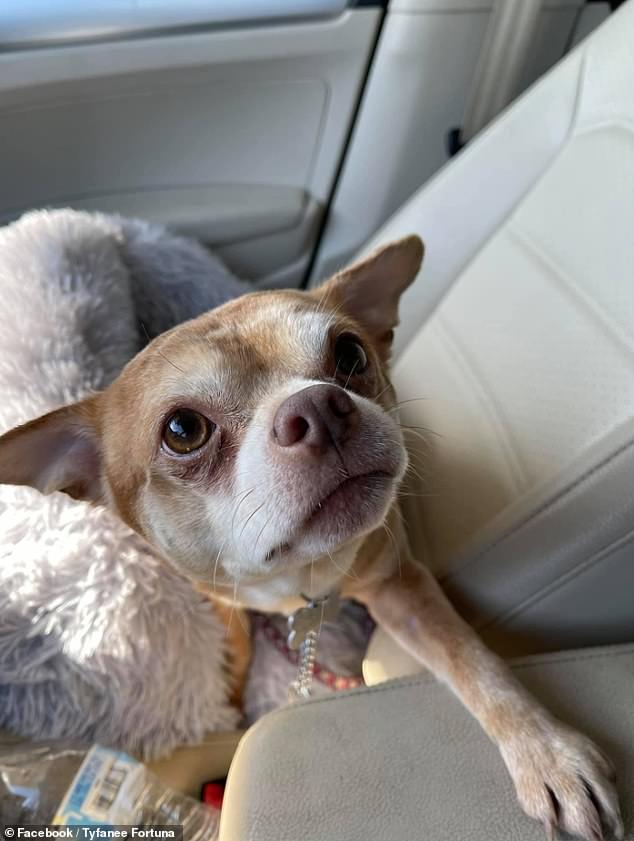 The foster mum said the pup was best-suited to live with a single woman, a mother-daughter duo or a lesbian couple 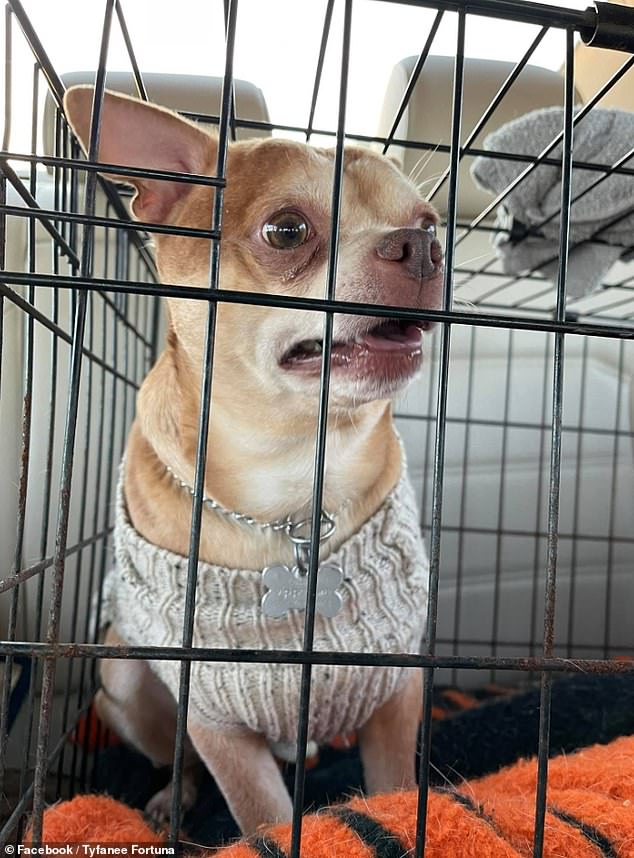 In the hilarious post, Tyfanee called Prancer a ’13lb rage machine,’ and said he hard turned her home into a ‘Chihuahua hellscape’

‘Have other dogs? Cats? Don’t apply unless they like being shaken up like a ragdoll by a 13lb rage machine,’ she wrote.

While Prancer was currently living with Tyfanee’s other seven dogs and 12 cats, she said he was still begrudgingly merely co-existing with them and was not enjoying it.

She added Prancer couldn’t live with children either, even though he had never been in the presence of a child.

‘I can already imagine the demonic noises and shaking fury that would erupt from his body if he was. Prancer wants to be your only child,’ she said.

But in spite of this list of particular behaviors, Tyfanee also said Prancer had some ‘good traits.’

‘He is loyal beyond belief, although to tell you a secret his complex is really just a facade for his fear,’ she wrote.

‘If someone tried to kill you I can guarantee he would run away screeching. But as far as companionship, you will never be alone again,’ she added.

She went on to say Prancer liked car rides and was house trained, as well as knew basic commands.

She added he wouldn’t wreak havoc on their owner’s home when they were out and added he was ‘cute to look at’ even though her family called him ‘bologna face.’

‘His ideal home would be with a single woman, a mother and daughter, or a lesbian couple,’ she said.

Tyfanee added that the pup couldn’t live in an apartment because he would ‘ankle bite’ neighbors and added he’d have to be kept in a separate rooms if you had people over. 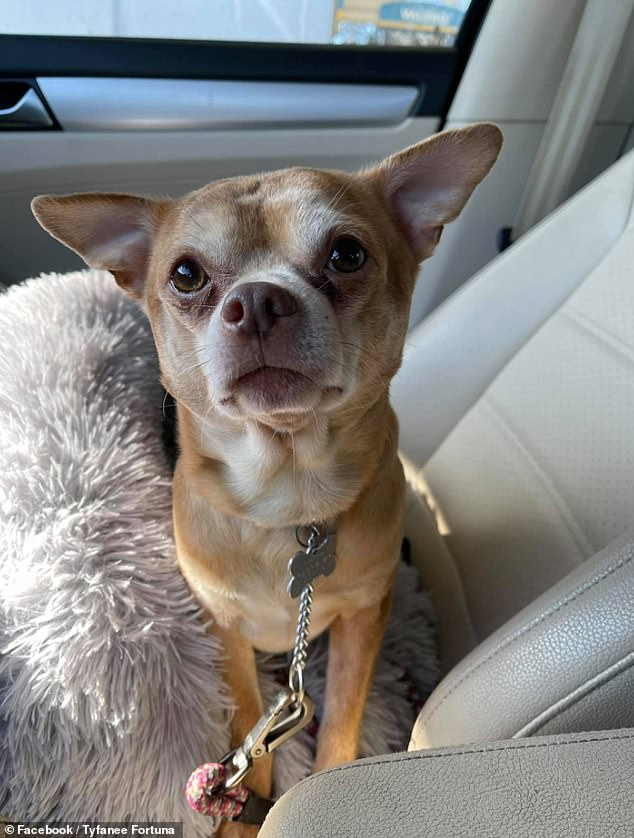 Prancer is available via Second Chance Pet Adoption League. Tyfanee said she was two-years-old and would live up to 21 ‘out of spite’ 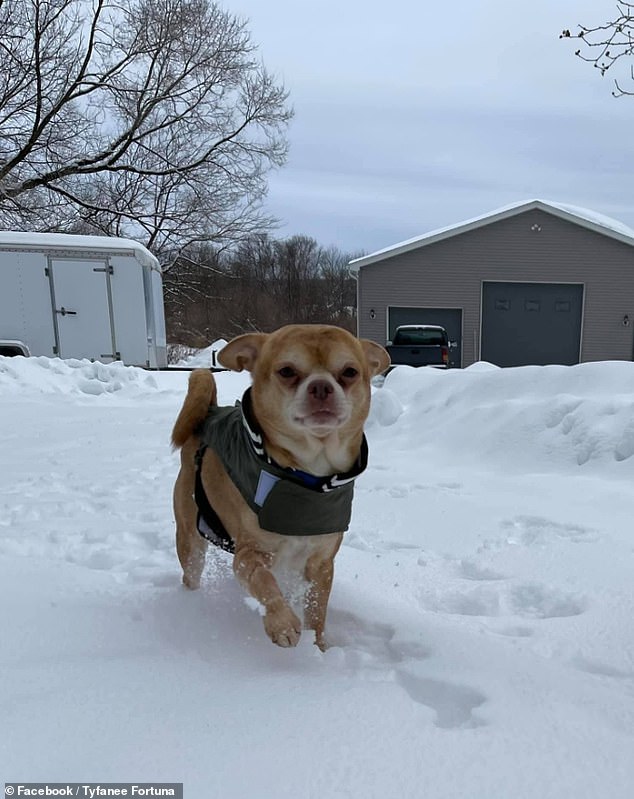 The foster mum said her family called Prancer ‘bologna face,’ but added he was cute and house trained

‘I know finding someone who wants a chucky doll in a dogs body is hard, but I have to try,’ she said.

Tyfanee explained Prancer was available for adoption through the Second Chance Pet Adoption League and was based in New Jersey but could be adopted in the Tri-state area.

‘If you’ve always wanted your own haunted Victorian child in the body of a small dog that hates men and children, please email [email protected] Oh, also he’s only 2yrs old and will probably live to be 21 through pure spite, so take that into account if you’re interested,’ she concluded.

People loved Tyfanee’s post, who quickly went viral. She achieved her goal of getting people interested in Prancer, has some women said he was their ‘dream dog.’

‘This is f****** brilliant Tyf,; one said, while another called the post ‘pure poetry.’

‘I mean, I think he’s cute as all hell but I think everyone in the house would not want this,’ one said. 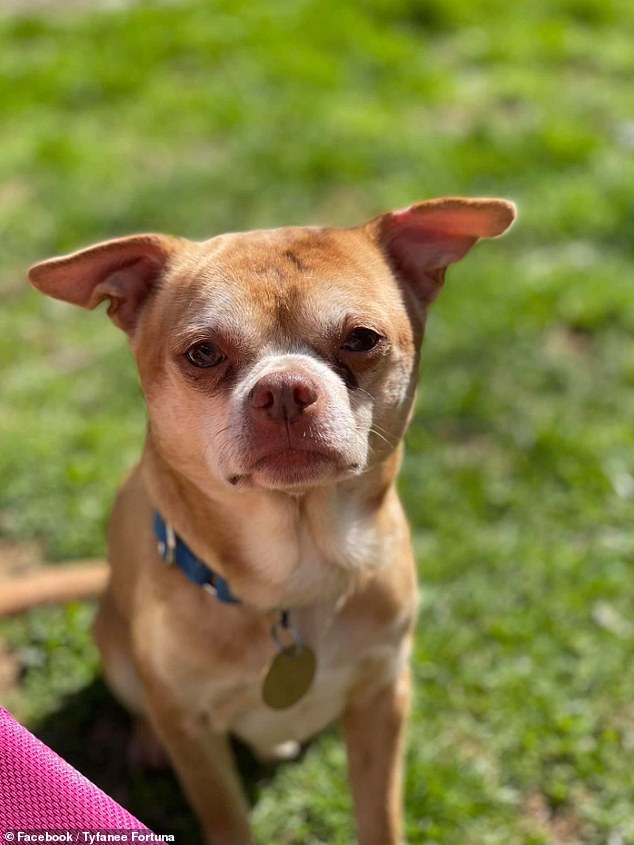 ‘I love him and wish he was mine,’ said another.

‘Stop this sounds like my dream do,’ said another.

‘You’re amazing. I hope this goes viral and you find the perfect home for Prancer,’ one said.

‘This might be the best adoption profile I have ever read,’ another wrote.