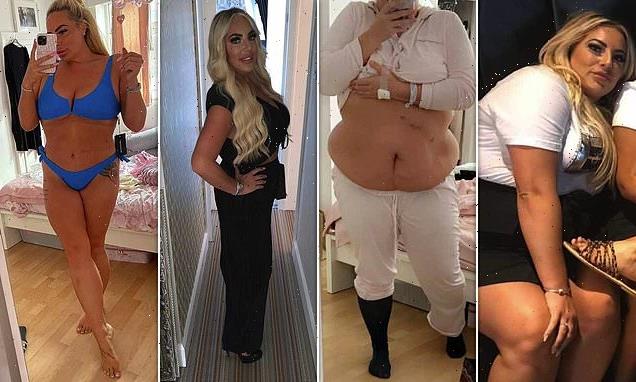 A woman whose weight spiraled due to a midnight McDonald’s habit has shed almost half her body size with help from a gastric band.

The healthcare assistant who now loves posing in bikinis, has revealed she was able to transform her figure with surgery, including a full body lift and lipsuction. 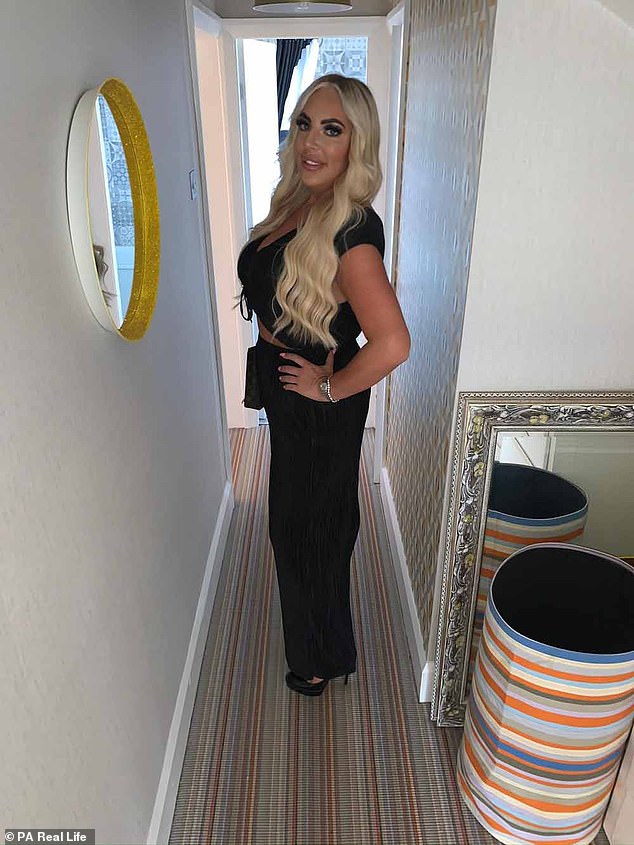 Mollie Coleman, 26,from Redcar, North Yorkshire, saw her weight spiral to 22 stone as she binged on midnight McDonald’s feasts at her heaviest. Pictured: Mollie after losing weight

Mollie who was a slim size 12 before her pregnancy, revealed she gained weight despite suffering from extreme morning sickness. Pictured left: Before surgery, right: Now

The mother, who has a six-year-old daughter Lola-J, told how the £5,000 gastric band has changed her life, saying: ‘I’ve bought loads of bikinis and taken loads of pictures. I want to go away and show my body off.

‘When I booked in for my surgery, I wasn’t even nervous. I just knew nothing else would help.

‘If I have one piece of advice for anyone thinking of having the surgery it would be to just go for it. It was one of the best decisions I ever made.’

Mollie who was a slim size 12 before her pregnancy, said she could not keep anything down during the day but would eat enough to feed a small army at night.

She confessed: ‘It was getting to the point where I was going to McDonald’s in the middle of the night.

‘I was always quite slim until I had my daughter. I wore a size 10-12 and weighed 12 stone. I gained a lot of weight being pregnant. My healthy eating habits just went out of the window.’

Mollie who spent £5,000 on gastric weight loss surgery, said her healthy eating habits vanished while pregnant. Pictured: At her heaviest

To make matters worse, Mollie also suffered from polyhydramnios or too much amniotic fluid.

While it can cause problems for the baby, her daughter was fine, however it increased her anxiety and she thinks exacerbated her strange eating habits.

‘You think once the baby’s born all the excess weight will go, too,’ she said.

‘Lola-J was 8lb 10oz, so I thought straight away, “That’s 8lbs gone”. It just doesn’t happen like that, though.

‘But I didn’t exactly help myself when I was pregnant. I wasn’t doing any exercise. I drive, so I wasn’t walking anywhere.  I was literally eating everything and doing nothing.’

Mollie admits she struggled to feel comfortable after the birth of her daughter. Pictured, before her pregnancy

Mollie struggled to feel comfortable after Lola-J was born and would cover up in black clothes, with her size 24 jeans digging in.

She said: ‘I used to work nights and would snack and drink cans of Red Bull to keep me awake.

‘I’d grab quick convenience foods like pizzas and burgers before heading back to work.

‘Over the years I tried diets, such as calorie counting and meal replacement shakes and even diet pills, but nothing seemed to work.

‘If I lost any weight, I’d only end up putting it all back on and more. I just got bigger and bigger.’

Mollie decided to shed her excess weight after being persuaded onto the scales, while getting ready at a friend’s house in 2019. Pictured: Mollie now

Her epiphany came in the early summer of 2019 when she was getting ready at a friend’s house and, persuaded onto the scales, realised to her horror that she was just 1lb away from 22st.

Mollie continued: ‘I stood on my friend’s scales and actually cried when I realised how heavy I was. I just went home and cried my eyes out.’

She said: ‘I needed help. I had no willpower. I was dieting, but I was still eating rubbish. I knew weight loss surgery was the answer, as some of my mum’s friends had had stuff done and I’d seen them lose quite a lot. 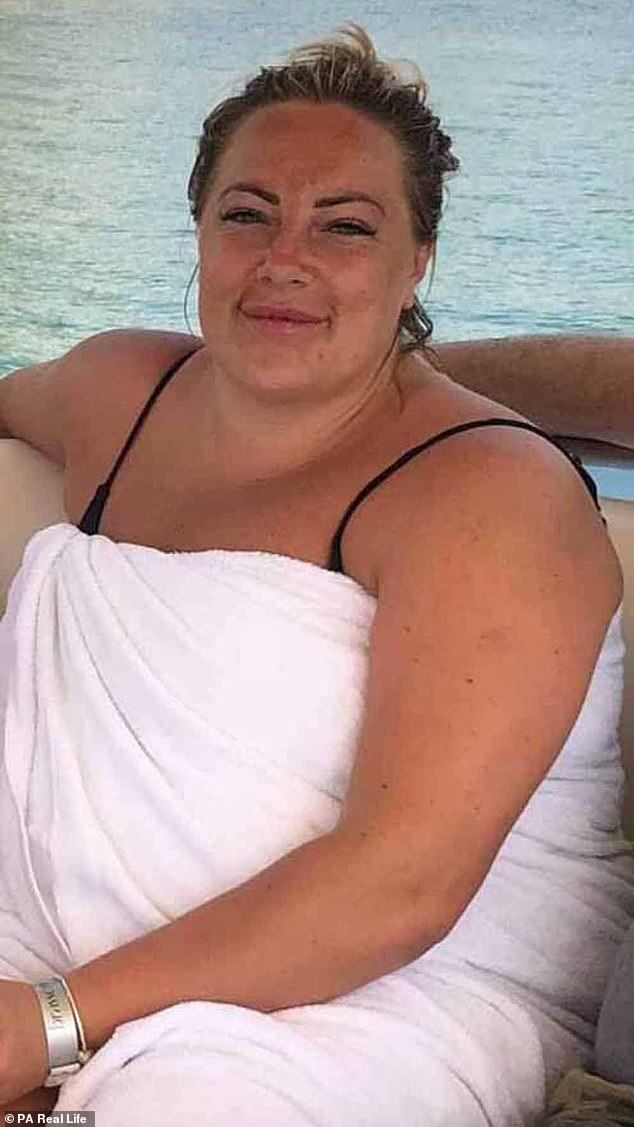 Mollie said she was convinced weight loss surgery would help after seeing the results of friends who’ve had similar procedures. Pictured: Mollie at her heaviest

Mollie claims she wasn’t nervous when she booked in for her gastric band surgery with the Transform Hospital Group, in Birmingham on September 13, 2019.

Paying for the procedure using a personal loan, she said: ‘It took under 45 minutes. I went in one morning and I went home the next day.’

Insisting the operation did not hurt, she also says any pain was worth it for the result.

‘The only thing was that you are blown up with gas – so you have trapped wind in your shoulders and there’s no way of getting rid of it,’ Mollie said.

‘It was uncomfortable more than painful and my incisions never hurt – I think I’m a tough cookie.’

A gastric band was installed around Mollie’s stomach to limit the amount she could eat and was tightened by injected fluid.

After two or three ‘band fills’ her weight started dropping off. 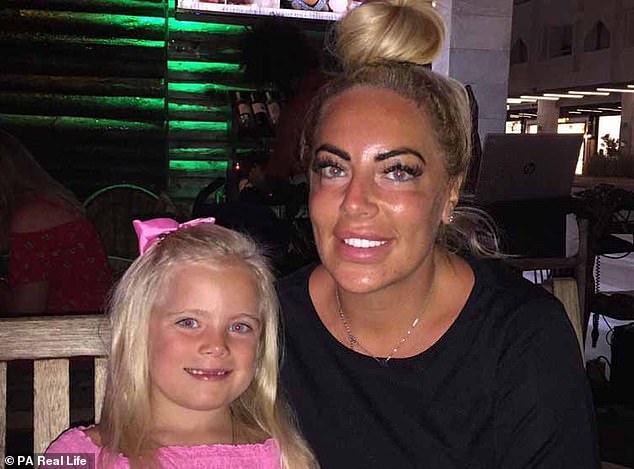 Mollie who funded her surgery with a personal loan, said the operation wasn’t painful but she experienced some discomfort. Pictured: Mollie with her daughter Lola-J

She said: ‘I had my surgery in September 2019, and I’ve just lost weight ever since.

‘The first thing I couldn’t eat was bread and I’ve never been able to since, which has really helped. Mollie began to notice a real difference just four months after going without junk food.

Then, when lockdown hit in March 2020, her weight loss sped up, thanks to her long daily walks.

She said: ‘There was nothing to do, so I was going walking all the time and most of my weight came off then. That was when I really lost a lot of it – it was incredible to see.’ 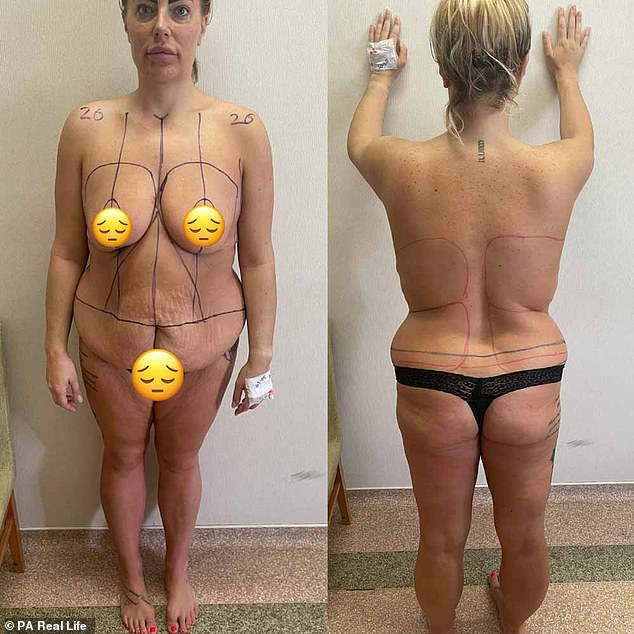 Mollie said she was able to see visible differences after going without junk food for four months. Pictured: Mollie’s body mapped out ahead of further surgery 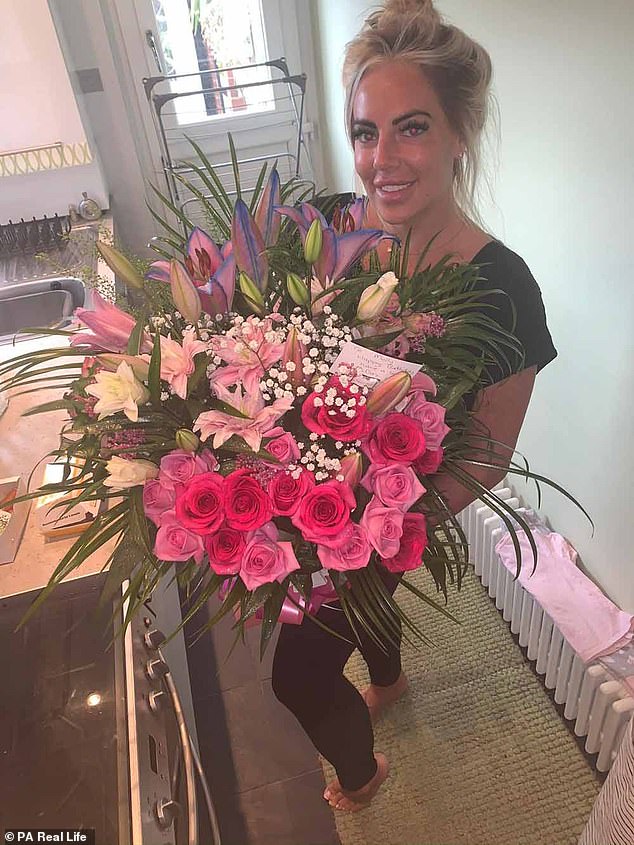 Mollie decided to go overseas for surgery because of the sagging skin she was left with after losing weight. Pictured: Mollie in October 2020

By the end of 2020, Mollie weighed a svelte 14st 4lb and was delighted to fit back into her old size 12 clothes.

But she was not finished yet.

‘I was so big that I knew when I lost the weight my skin was going to sag,’ she said.

‘I knew that I would have to have more surgery to get back to how I was before having my daughter. Losing weight was a step in the right direction, though, and I got there in the end.’

Mollie opted to go to Istanbul, Turkey for a 10-hour operation in May 2021, as she wanted to be at a clinic that specialised in obesity.

On May 4, she had a full 360 body lift, or tummy tuck, as well as procedures on her breasts and buttocks and all-over liposuction – costing £6,500 in total, not including her flights, Covid tests and other expenses, which she had saved up to pay for – again insisting her recovery ‘was not painful’. 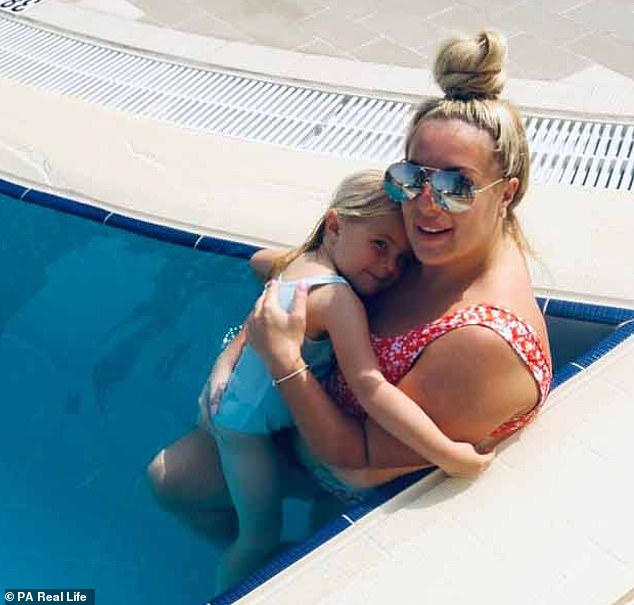 Mollie spent £6,500 on a full 360 body lift, liposuction as well as procedures on her breasts and buttocks. Pictured: With her daughter in Dubai

She said: ‘My stomach was quite obviously loose and saggy. I had my stomach done and the 360 lift where they lift your bum. I’ve had my boobs done. I’ve had liposuction all over – all in one surgery.

‘I’m hopefully at the end of it now. I don’t know if I’d go for any more, but never say never.

‘I never had any pain. I just knew it was part of the process and I got on with it.’

She said: ‘I have so much more energy and can now go into a shop and pick up whatever I like.

‘When you lose weight, you gain confidence and you start wearing different clothes – I’m like a totally new person.’ 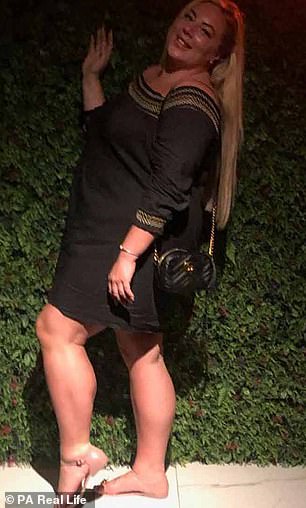 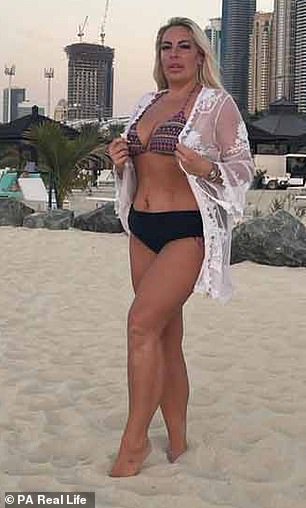 Mollie said she is now able to pick up whatever she wants in shops and feels like a ‘totally new person’. Pictured left: Before losing weight, right: Now

The impact of her new diet also does not bother Mollie, who is still happy to eat out in restaurants.

She said: ‘I can only eat a saucer-sized amount, so I always try and get a smaller plate, or just order a starter. I do waste a lot of food, as the amount I can finish is ridiculously small. In fact, people must wonder why I’ve ordered it!’

Mollie’s focus now is on making the most of the summer, while enjoying all the benefits of her new body.

‘I’ve bought loads of bikinis and I’ve got a holiday booked to Spain, and a backup trip to St Ive’s in Cornwall, in case Covid means I can’t go.

‘Hopefully, I’ll get to Dubai by the end of the year too – that’s where my dad lives.

‘I need to go on holiday with my new body!’ 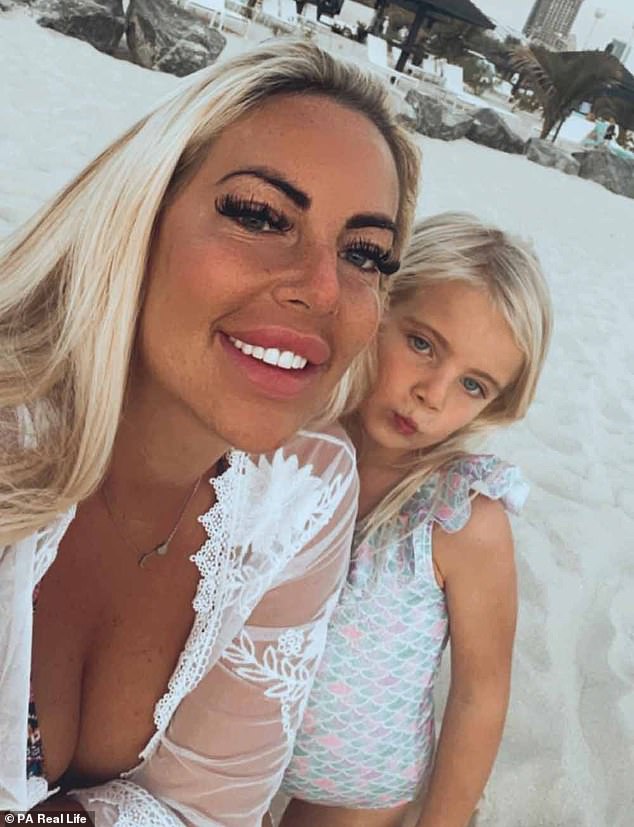 Mollie revealed she’s booked a few holidays and purchased lots of bikinis. Pictured: In Dubai with her daughter