Fans of  ‘Jersey Shore’ breathed a sign of relief when Ronnie Ortiz-Magro showed he’s moved on from Jen Harley with a new girlfriend. But his cast mates are taking the romance with a ‘grain of salt.’

After all of the intense drama that marred Ronnie Ortiz-Magro‘s on and off relationship with ex Jen Harley, he thrilled fans by showing off his new bikini-clad girlfriend Saffire Matos to the world in an Oct. 28 Instagram post. The pair was on a romantic vacation in Puerto Rico, and Ronnie, 34, said that “happiness is a gift” and that he’s “thankful” for Saffire. However, his Jersey Shore cast mates aren’t ready to assume that he’s totally the market just yet.

“The cast of Jersey Shore isn’t taking Ron’s new relationship with Saffa very seriously. They are taking it with a grain of salt since they feel Ron isn’t going to really settle down anytime soon,” a source close to the cast tells HollywoodLife.com EXCLUSIVELY. “Ron seems really happy, but he falls very fast and they feel he has a lot of growing up to do still. But as long as he’s happy, they’re happy.

One thing the cast is VERY thankful for is that Ronnie and Jen — who is the mother of his two-year-old daughter Ariana Sky — seem to be over for good. “They are very happy that he’s moving on from Jen, as the group really had trouble getting along with her. So they’re open to getting to know Saffa. That relationship was really hard on Ron and they’re just happy to see him back to being himself again.” 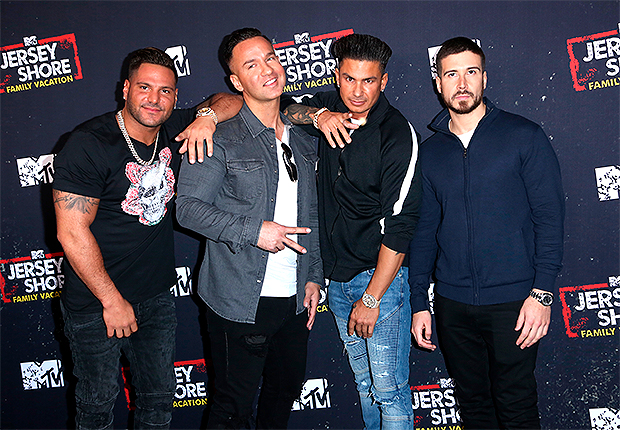 Ronnie and Jen’s turbulent relationship was marred by alleged acts of physical violence. Jen allegedly tried to run him over with a car, and they accused each other of domestic violence, which included  fights that left Ronnie with a black eye. Jen claimed Ronnie broke into her house and trashed it following a New Year’s Eve 2019 altercation where she allegedly threw an ashtray at Ronnie. He was later photographed in the aftermath with a split lip, gashes on both his nose and forehead and a bruise above his eyebrow.

When Ronnie debuted his photo with Saffire, co-star and friend Mike “The Situation” Sorrentino responded in the comments by writing, “Taken Ronnie.” He then replied back to the Sitch, “lmfaooo bruhhhh stable Ronnie.” “Stable” Ronnie then went on to post a second IG bikini kissing photo with Saffire on Oct. 29, writing “You can’t force happiness, when you know it’s real you realize it eventually chooses you! #HappinessIsAGift #ThankFul” in the caption.

You can’t force happiness, when you know it’s real you realize it eventually chooses you! #HappinessIsAGift #ThankFul

“It’s really hard to gauge how serious this could be just because it’s hard to see him actually settling down,” our insider tells us about Ronnie and the Staten Island NY-based eye lash tech. “He goes to Vegas to see friends and spend time with Ariana. He’s got a bit more growing up to do, but having said that, he’s happy and he’s so obsessed with his daughter that he’s good for now. It definitely felt good for him to post that picture.

The source also adds that, “The cast has not met her yet,” and that Ronnie and Saffa “met awhile ago through mutual friends.” However, Ronnie’s former Jersey Shore co-star Nicole “Snooki” Polizzi already follows Saffire via her Instagram, which is set to private.