When she meets mature-age women who have taken apprenticeships in plumbing, Anne Boyle hears a common reason it took them so long to start.

“They’ve all been told when they were leaving school, ‘no, sorry it’s not for you, you’re female’,” says the Master Plumbers field officer and plumber. 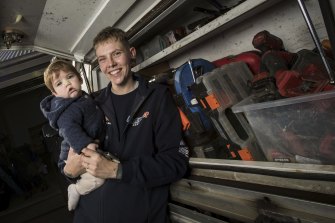 Boyle, the industry body’s project manager for women in plumbing, has seen a shift since the pandemic. As work in female-heavy industries, such as hospitality, evaporated, the desire for job security turned women’s minds to the practical.

“COVID has changed a lot for people … [women] are thinking about the long-term game and taking it into their own hands.

“That’s why a lot of them are making the move; they know trades are so secure you’ll never be out of work, which is amazing. After COVID, they want to have that reliable career for their family.”

Ketta Jackson, 30, worked in hospitality for many years before discovering plumbing through meeting tradesmen where she worked, then aged 28.

She joined their employer as an apprentice plumber and is happily in her third year.

“Looking back, I wish I’d done it so much earlier because of that stable income. It sets you up for a lifetime of work.

“And when you get in there, especially with plumbing, you realise it takes brains and not just brute strength – you shouldn’t be put off by seeing it in the past as ‘a man’s job’.”

Though there are other female plumbing apprentices at her regional Victorian employer – including a mother of six who is a first-year apprentice – customers are usually still surprised to see a woman arrive.

“When you turn up, more often than not, they ask, ‘Why is there a woman plumber?’ A lot of people are yet to have experienced a woman tradie in their house,” said Jackson, one of 10 plumbing apprentices recognised with annual grants sponsored by Rheem (several were mature-aged and three were women, including Brisbane’s Amber Granzien, aged 15).

“But everyone is great. No one makes you feel you can’t do the job.”

Plumbing is the third-highest-earning blue-collar job in Australia after construction site manager and boilermaker, but until recently, it has been almost exclusively male.

But this is changing relatively quickly, according to Boyle, as shown in a steep increase in interest among women in doing Master Plumbers apprenticeships and pre-apprentice training. After the next intake, nearly 30 per cent of places will be taken up by women, up from the current 19.6 per cent.

One Master Plumbers apprentice is a 41-year-old grandmother who is a former nurse.

Janet Cribbes, chief executive of Tradeswomen Australia, said education programs to introduce a variety of trades to schoolgirls were boosting engagement, but: “There needs to be a whole lot more national awareness that women can do this, girls can do this, it’s really lucrative – pays really well – and there’s job security for the next 40 years.”

Australia’s first registered woman builder, Susan Alberti, said the lack of amenities for tradeswomen on big building sites still had to be remedied but, especially after the pandemic: “I definitely see a change in attitude among women [and more are interested in trades].”

Boyle agrees that some outdated attitudes towards women on sites persist, and “there will be a small group of people who are not willing to change”.

Though the lunchroom may still “go quiet” when a tradeswoman walks in, they do fit in.

“Within a week or two, they [other workers] realise you’ve got the same banter,” she said. “And they see the work that you can do.”