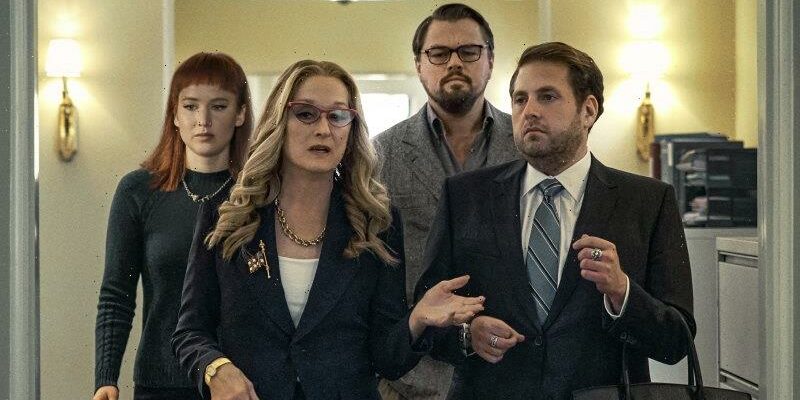 Director Adam McKay’s comic The Big Short, which used such clever devices as having Margot Robbie explain sub-prime loans while drinking champagne in a bubblebath, was widely acclaimed as a scalding examination of the global financial crisis.

Many respected critics have been decidedly less enthusiastic about McKay’s Don’t Look Up, which has been Netflix’s top-ranked movie since opening on Christmas Eve. The satire from a director who has also made Vice, the Anchorman movies and Talledega Nights has Leonardo DiCaprio as an astronomy professor and Jennifer Lawrence as his PhD student who desperately try to warn the world about a comet that will wipe out humanity. 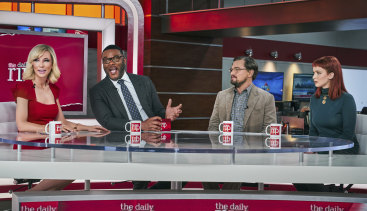 There was this slapdown from Time magazine: “Instead of using the movie’s laborious more-than-two-hour runtime to allow his ideas to unfold, McKay hits you with most of them in the first half hour. Being clonked with a meteor would be more subtle.”

And this from The Guardian in the UK: “Don’t Look Up is like a 145-minute Saturday Night Live sketch with neither the brilliant comedy of Succession, which McKay co-produces, nor the seriousness that the subject might otherwise require.”

Amid these critical maulings, Don’t Look Up has been widely watched. By the streaming service’s idiosyncratic way of measuring, it racked up 111 million hours of viewership in its first three days.

While very funny at times, it is admittedly an uneven movie that sometimes wastes an A-list cast that includes Meryl Streep as the American president, Jonah Hill as her son and chief of staff, Mark Rylance as a tech billionaire, Cate Blanchett and Tyler Perry as hosts of a morning TV show and Timothee Chalamet as a young skater.

But I’m siding with the minority of critics who have stepped away from judging Don’t Look Up for falling short of being a cinematic masterpiece and loved the ambition, ideas and anarchic energy. 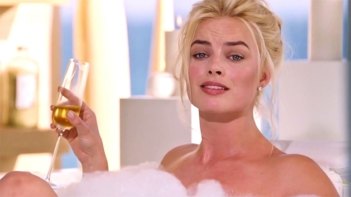 Clever device in a scalding examination of the global financial crisis: Margot Robbie in The Big Short.Credit:Paramount

It deserves respect as a provocative movie about our inability to confront the threat of climate change.

The targets are all the forces standing in the way of action: duplicitous political leaders more worried about the next election than an extinction event; their cynical and self-serving staff and functionaries; those media organisations that are more interested in facile entertainment than truth; and social media tycoons who only feign interest in the greater good.

Don’t Look Up is fuelled by fury about long-term lack of decisive action and contempt for science. Change the accents and there are equivalent characters – with the possible exception of the self-serving tech billionaire – much closer to home.

“Speaking as a climate scientist doing everything I can to wake people up and avoid planetary destruction, it’s … the most accurate film about society’s terrifying non-response to climate breakdown I’ve seen,” wrote Peter Kalmus in The Guardian. ”The scientists [in the movie] are essentially alone with this knowledge, ignored and gaslighted by society. The panic and desperation they feel mirror the panic and desperation that many climate scientists feel.”

Kalmus details the grim political response in the US: “We live in a society in which, despite extraordinarily clear, present and worsening climate danger, more than half of Republican members of Congress still say climate change is a hoax and many more wish to block action, and in which the official Democratic party platform still enshrines massive subsidies to the fossil fuel industry.”

Faced with all that, maybe what matters is getting the rage down on the page, cast stars and shoot a broad comedy – urgent and anguished – that rattles the cage. Get people talking.

And in the middle of a pandemic that has seen politicians regularly dismissing the views of scientists and health authorities, it is satire that feels almost too close to reality.

“McKay’s work with DiCaprio is particularly memorable, partly because Dr Mindy’s trajectory – from honest, concerned scientist to glib, showboating celebrity – strengthens the movie’s heartbreaking, unspeakable truth: human narcissism and all that it has wrought, including the destruction of nature, will finally be our downfall,” writes Manohla Dargis in The New York Times. “In the end, McKay isn’t doing much more in this movie than yelling at us but then, we do deserve it.” 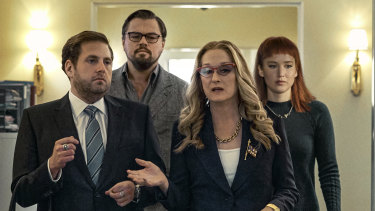 Ignoring the science: Jonah Hill, Leonardo DiCaprio as an astronomy professor and Jennifer Lawrence as a PhD student with Meryl Streep as the US president and Jonah Hill as her son and chief of staff in Don’t Look Up.Credit:Netflix

Can any movie change the world?

In 1983, The Day After confronted a record television audience with the horrific consequences of nuclear war. US President Ronald Reagan wrote in his diary that it changed his mind about nuclear policy. Four years later, he signed a treaty with Soviet president Mikhail Gorbachev to scale down their nuclear arsenals.

After the frustrations of the climate change conference in Glasgow last year, it is too much to ask that Don’t Look Up will have a similar impact on this generation of leaders. But you have to admire a Hollywood filmmaker who thinks it’s worth a shot.