When it comes to villains, former Vice President Dick Cheney makes Darth Vader seem like a cuddly teddy bear. The visually unassuming man, described early on as “monotone bureaucrat,” decided to start a war all for the wrong reasons. Gave the green light to torture foreigners, relying on semantics to keep it lawful. Used his influence to control everyone under him — and the one person above him. Then, in retirement, he sold out his own daughter without so much as a second thought.

This is the takeaway of Vice, a slick and blistering biographical portrait that, one way or another, will provoke a passionate audience reaction. Oscar-winning writer-director Adam McKay is not going to hold your hand through this twisted odyssey the way he did with The Big Short. His latest film is like a hand grenade, exploding on impact. He sets the cutting tone right at the start with the words on the screen: The film is based on a true story. (Duh). It’s based one of the most secretive men in the world. (Copy that). “We did our f—ing best.” Oh boy.

One unequivocal fact: Christian Bale always does his best. The actor has the uncanny ability to physically transform himself into his roles, and this may be his niftiest trick yet. He doesn’t just resemble the lifelong politician, he completely disappears. (Quick story! I saw a disheveled, pudgy man at a bar at the Telluride Film Festival over Labor Day weekend in 2017 and failed to realize it was Bale. He was already packing on the pounds and getting in character.) The flaws in Vice are not reflected in his terrific performance. 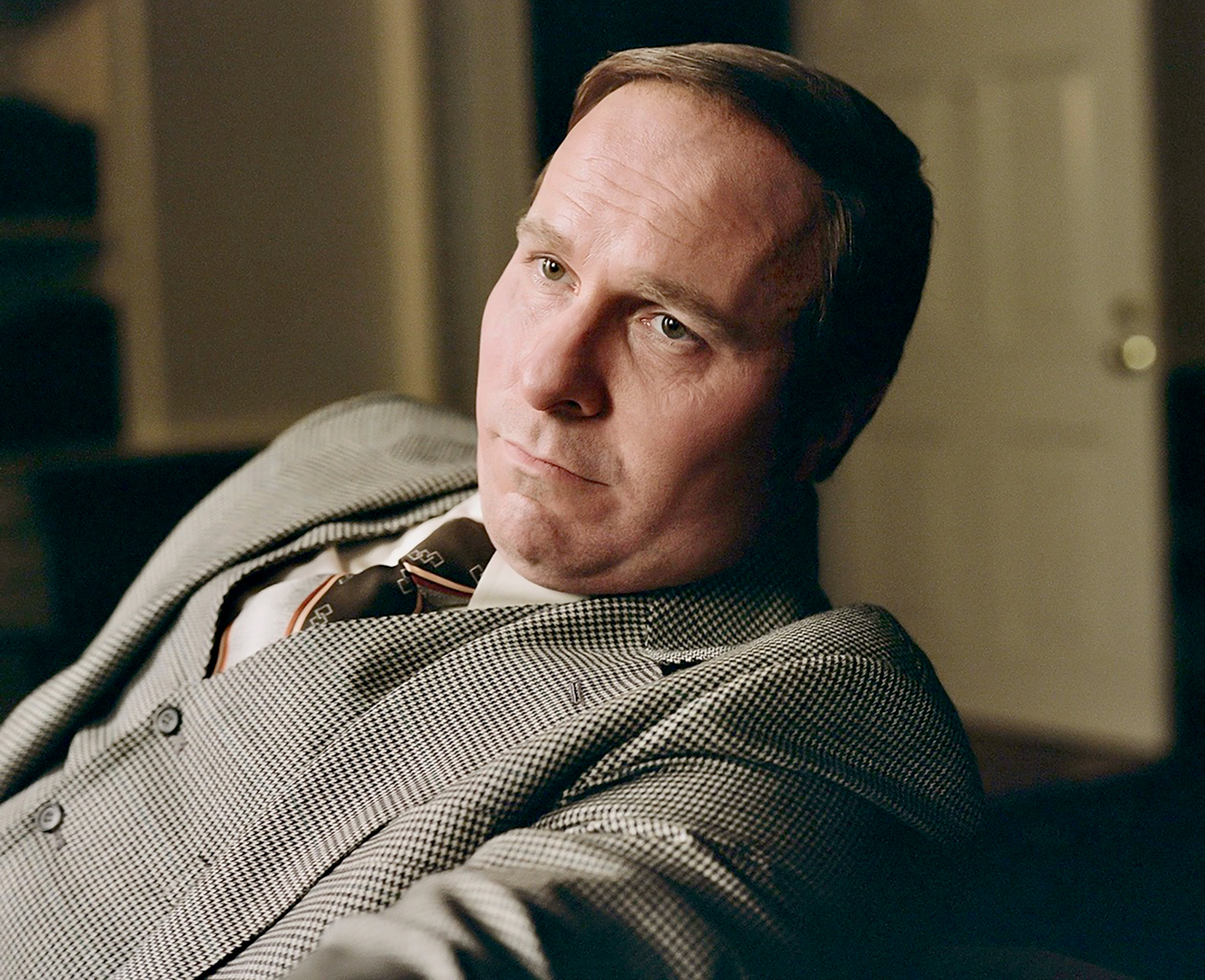 Cheney was never voted most likely to succeed. He was a ne’er do well Wyoming resident that dropped out of an Ivy League school because of his alcohol issues. He cut power lines for a living. He’d likely still be an anonymous blue-collar dirt bag if not for the headstrong woman he chose to love forever. Her name is Lynne (Amy Adams), and after his second DUI arrest, she puts the screws to him in her parents’ living room. He must shape up or get out. “I promise,” he tells her in a plain-spoken sincerity, “I’ll never disappoint you again.”

His rise is a quick one. He starts out as a White House intern in 1968 for a brash Republican congressman named Donald Rumsfeld (Steve Carell). He barrels his way through the political ranks during various Republican administrations. During the Democratic years, he becomes CEO of one of the world’s largest oil companies and rakes in millions. By the time Texas governor and Presidential candidate George W. Bush (Sam Rockwell) puts his scuffed shoes on his desk in 2000 and casually asks him to be his running mate, Cheney takes it as an insult because the position is merely symbolic. He agrees anyway, figuring it’s an easy path to power. For Cheney, even the catastrophe of 9/11 is an opportunity to call the shots.

Cheney evolves into a ruthlessly authoritative, manipulative figurehead for reasons that go unexplained. In fact, McKay doesn’t offer insight into his psyche other than his vague desire to please his wife. (Granted, who wouldn’t want to make Adams happy?). Outside of the White House, Bale is permitted just a few shadings — as when he gives his daughter a supportive hug when she tearfully comes out as gay. The reaction is not enough to warrant any sort of understanding of the enigma. Like Hugh Jackman’s portrayal of Gary Hart in The Front Runner, the man is impenetrable. 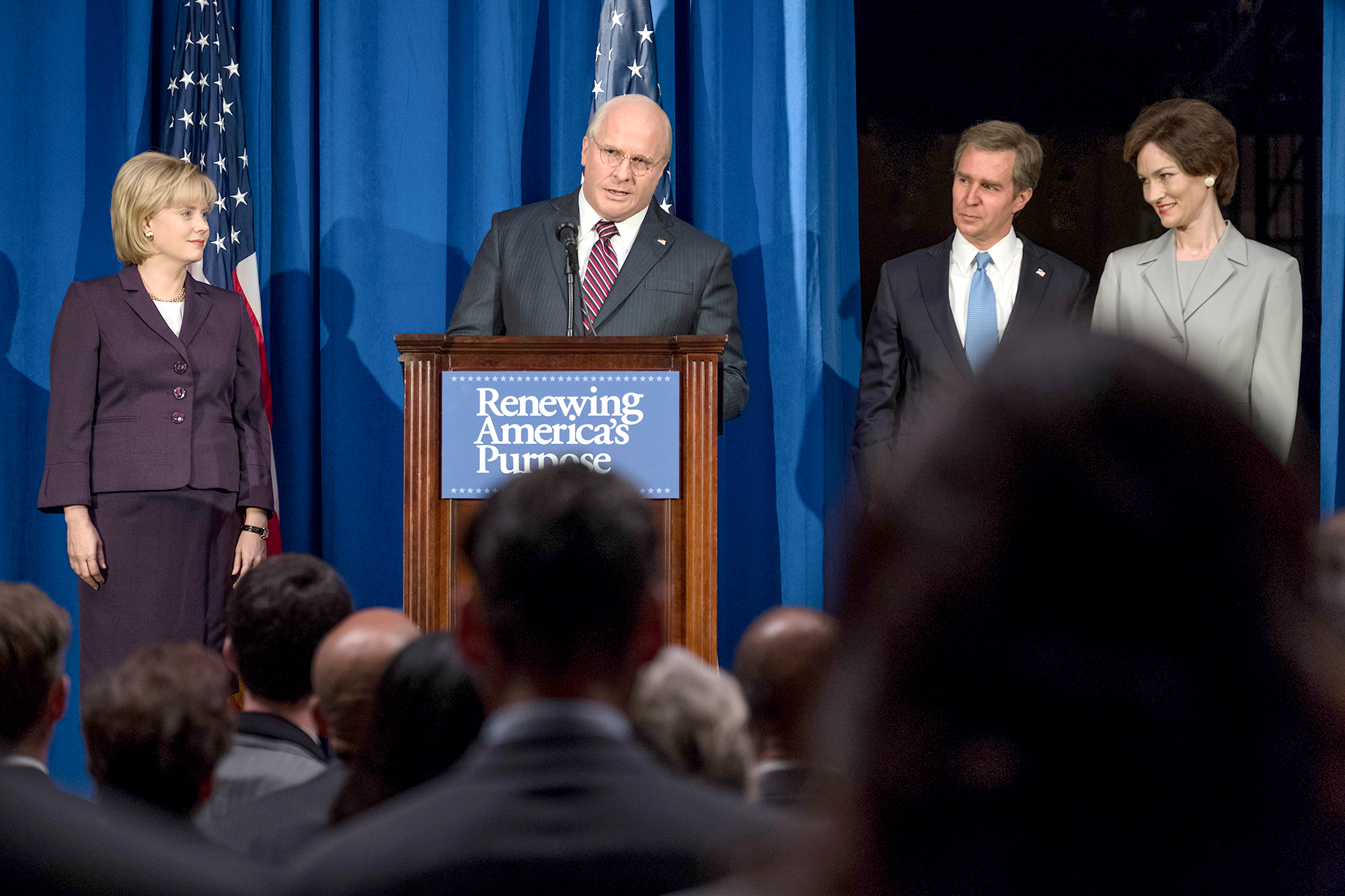 If you’ve been paying vague attention to current events over the past 15 years, then the revelatory information about the Iraq War origins and Bush’s blasé, almost buffoonish attitude about the POTUS position may come off like yesterday’s news. To wit: Michael Moore mined much of this material in his hit documentary Fahrenheit 9/11 back in 2004. If you’re not a political junkie? You’ll learn that there’s a connection between a clandestine conversation in 1977 to the 2008 recession and recent wildfires. This information is all presented via energetic pacing and zippy dialogue, though some red-state voters will surely see red over Vice’s partisanship.

As in The Big Short, McKay — the former head writer of Saturday Night Live and the director of Anchorman — also approaches the serious subject with impressively cynical-yet-winking humor. Margot Robbie isn’t in a bathtub explaining mortgages this time around, but McKay does employ other gimmicks. Some of it works, including a hilarious credit sequence. A weary narrator, a fake newswoman breaking the fourth wall and repeated usage of stock footage are a distraction. Bale talking to the camera late in the film comes off like a narrative cop-out.

Depending on your political viewpoint, Vice all comes down to a leader behaving spectacularly badly or intelligently. Either way, there is something fascinating — if not troubling — about a civil servant who speaks softly and carries a mighty powerful stick.