She’s the most provocative star of 2020: When not topping the Billboard charts with a song so raunchy we can’t name it, she’s appeared on the crime pages for a mysterious night of gunplay.

Meet Megan Jovon Ruth Pete, aka Megan Thee Stallion, a 25-year-old health care college student from Texas who has become the “it’’ girl of the music world thanks to her raps, her men — and the ensuing mayhem that always seems to follow her.

Of the controversy that accompanies her, the pal said it has only made Megan stronger, insisting, “She has grown a lot mentally, physically and everything in between.’’

Megan as a child

As a kid, Megan knew what it was like to struggle, growing up in the South Park section of Houston Texas, which she has described as half “ ’hood s- -t,’’ half “family environment’‘ to Rolling Stone.

Her mom, Holly Thomas, was a bill collector and Houston rapper known as Holly-Wood who raised Megan on UGK and the Notorious B.I.G. Thomas was also Megan’s first manager. 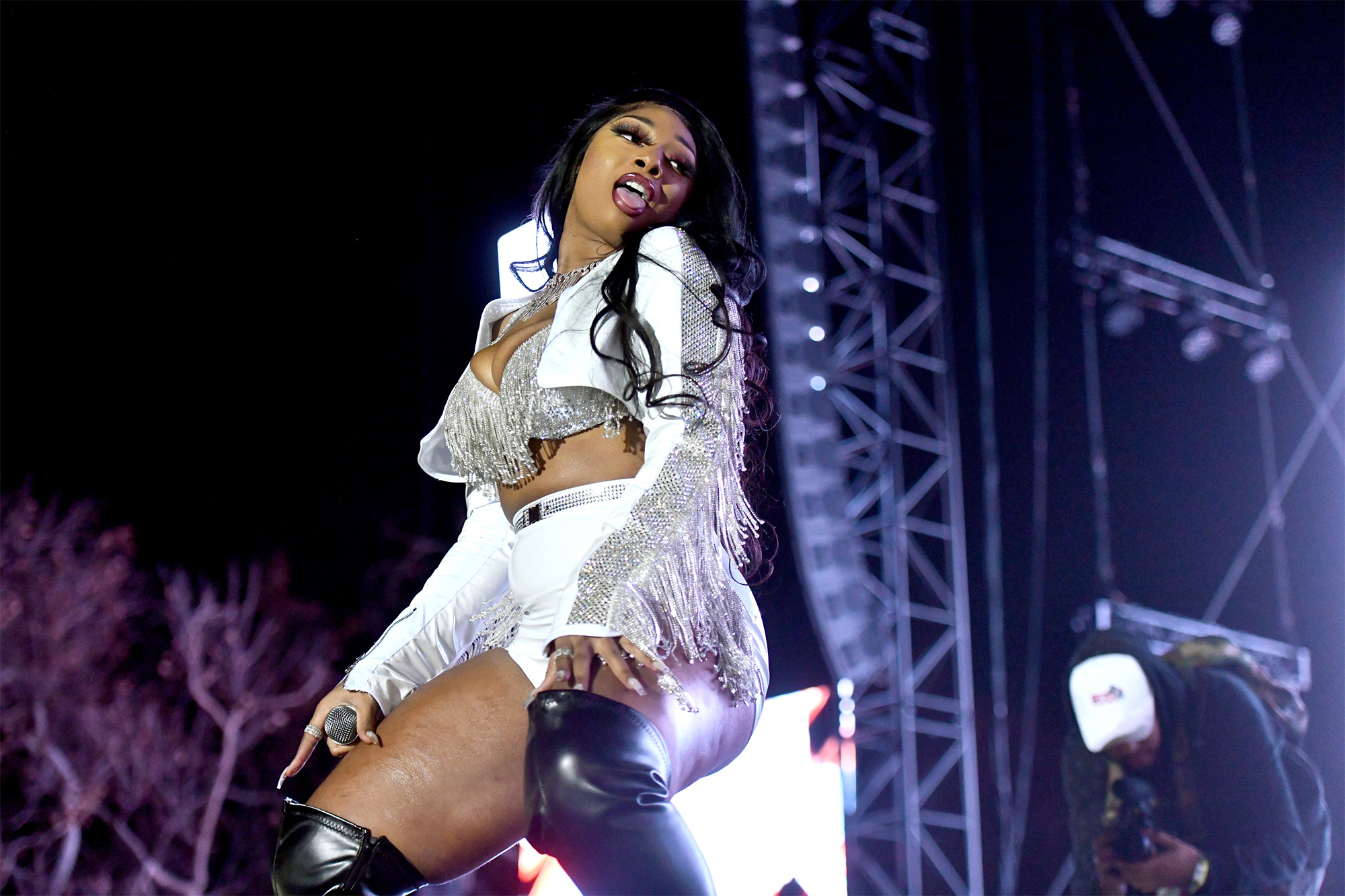 Megan has characterized her mom’s music as “hardcore gangster,” saying, “When I started rapping, and cussing and s–t, she was like, ‘I don’t know where you get it from.’ [But] she was a potty-mouth, worse than me.’’

The rapper has said her dad, Joe Pete, was a “full-time hustler” who was imprisoned for the first eight years of her life and died when she was just 15.

How Megan Thee Stallion got her name — and rep

Megan was in high school when she says grown men started calling her a “stallion” — Southern slang for a voluptuous, tall woman. The curvy 5-foot-10 rapper says she eventually figured why not embrace it — and Megan Thee Stallion was born.

She started rapping as a young teen, and by her freshman year at Houston’s Prairie View A&M University in 2013, she was already grabbing plenty of attention locally — although it wasn’t always for what she wanted.

Megan got into trouble with the school administration for posting twerking videos.

“Believe it or not, I used to be a little shy,” Megan has said. “I never wanted anybody to know that I could even rap. Even when I got to college and I told my best friend I could rap, she’ll be like, ‘OK. Well, then rap.’

“I wouldn’t do it. But then we went to a kickback, and I just started rapping. . . . I was confident in myself, but I didn’t really know how people would react to how I thought about myself on the inside.”

Y’all want me to put this bikini up on my website today ??

She ended up dropping out of school, got busted for fighting with an ex after she discovered he had a secret baby — and saw her freestyles start to go viral on YouTube.

Her latest hit, No. 1 on the Hot 100, is a collaboration with Cardi B called “WAP” (you can look up what it stands for). The video features the duo dancing in various stages of undress.

Megan is now well known for her outrageousness — but the controversy that comes with it doesn’t always make her happy.

“A man can be as mediocre as he wants to be but still be praised,” Megan has said. “A man can talk about how he’s about to do all of these drugs and then come and shoot your house up. But as soon as I say something about my vagina, it’s the end of the world?”

In March, not to be bowed by anyone, Megan filed suit against her old record label, alleging that the contract she signed when she was 20 was “not only entirely unconscionable, but ridiculously so.’’

While “FREETHEESTALLION” trended on Twitter, the rapper was in court fighting the label, 1501, and its CEO, former baseball star Carl Crawford, who called her a liar and a fraud in the press.

A Texas judge eventually ruled in her favor, and Megan celebrated the victory on Instagram, posting, “I will stand up for myself and won’t allow two men to bully me. I am NO ONES PROPERTY.”

Megan, Tory Lanez and that shooting

Then in July, Megan was caught up in a new controversy.

Los Angeles cops were called amid reports of gunfire from her rumored rapper boyfriend Tory Lanez’s chauffeur-driven SUV around 4:30 a.m. July 12 — and Megan was seen stumbling away and eventually treated at the hospital for bullet wounds in her feet.

She refused to identify the shooter — until Friday.

That’s when Megan publicly fingered Lanez as the man who shot her last month.

“Yes, this n—a Tory shot me,” Megan said in an Instagram Live video.

“You shot me, and you got your publicist and your people going to these blogs lyin’ and s–t. Stop lyin’. Why lie?” she said.

Asked how Megan had been handling the shooting, Wright told Page Six, “She don’t like people to feel sorry for her.

“I just can’t believe this really happened to her.’’

The LA District Attorney’s Office has said it is considering bringing assault charges against Lanez in the shooting.

Megan has since broken up with him, Wright said.

Who Meagan is dating

It’s not clear who if anyone the star is now dating. She was spotted with rapper Future at a strip club in Atlanta this past week, still sporting a bandage on her foot. Megan also has been linked with G-Eazy and Moneybagg Yo.

But she hardly needs a man at the moment.

The song that made Megan this summer

Cardi B even bought her pal a custom-made Birkin bag with a painted stallion on it, in the same black-and-white costume that Megan wore in their video, to celebrate the pair’s success.

Me and cardi just got off the phone screaming ???FIRST FEMALE RAP COLLABORATION IN HISTORY TO DEBUT AT NUMBER 1 ??? God is so great ?? THANK YALL !!! @iamcardib thank you for all your words of encouragement, thank you for all the laughs, & thank you for having me on the record ???? #WAP

But while fans go crazy over it, the work has critics bashing it as bad for women and just too vulgar. Singer and rapper CeeLo Green called the work “desperate’’ and “salacious,’’ although he has since apologized.

Megan’s plans for the future

Either way, Megan has plans for herself outside of the rap world.

She is currently enrolled at Texas Southern University studying health care, saying, “My grandmother would be very pissed off at me if I just stopped college right now.

“I got to get this degree. I already started it, and I’m interested in what I’m doing because I want to open up assisted-living facilities in the city.”