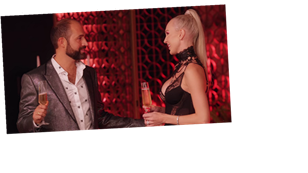 Selling Sunset fans were delighted to hear the news that Christine Quinn is expecting her first child with her millionaire husband that she married on the show.

Viewers watched as the couple tied the knot in a “gothic wonderland” ceremony where Christine broke tradition by wearing an all-black dress.

While Christine Quinn isn’t shy of the limelight, her husband Christian keeps a lower profile.

So as they gear up to become new parents, here is everything you need to know about father to be Christian Richard.

Describing her husband’s business skills, Christine told Women’s Health: "He attended MIT and specialises in the engineering of all types including software platforms."

Christian was the brains behind one of the first online food delivery platforms that paved the way for Deliveroo and JustEat.

"He's a genius. He's literally a genius,” Christine has said of her husband who was able to retire age 41 thanks to his success.

They met through a mutual where they say they shared an “instant connection” and the couple were married within a year.

During a toast at their engagement party, Richard said: "Christine, I met you in Beverly Hills not even a year ago, and I absolutely fell head over heels in love with you."

"We had instant banter which is really special, you don’t get that too often," he revealed. "I pursued her, and she’s a tough catch. But here we are now, she’s amazing, complements me perfectly, and we’re building a life together."

Speaking about their first introductions, Christine has said how her friend had dated Christian first and suggested the pair meet.

Speaking to TV host Amanda Hirsch, she said: "I met Christian through a girlfriend of mine. She went on a date with him and she just wasn't into it.

"She was like, 'Hey, I went on a date with this guy and just like, not feeling it, but I do know that he is looking for a house.'"

Of course, working as a real estate mogul Christine was more than ready to help out and offer her services.

"So I went on a date with him and, I was like, oh, I really … like this guy," she explained, adding: "He's like different. He's funny. And then, you know, we started dating immediately and then when we were looking for houses like we were looking for houses like for us, you know, so it really was like the perfect situation and I kind of manifested it."

Despite appearing on Selling Sunset, Christian hates being in front of the camera.

Christine explained to Refinery29: "I asked him, 'Do you want to be on Selling Sunset?' He said, 'Oh my gosh, this is so not me.'"

However, Christian eventually changed his mind and Christine says he "decided to do it for me," but "filming is a really awkward thing. It’s not organic in any way. It’s not reality in any way."

"Being on the show for him—he does his best, bless his heart … But he’s definitely really, really shy on camera."

Selling Sunset is back on screens later this year.