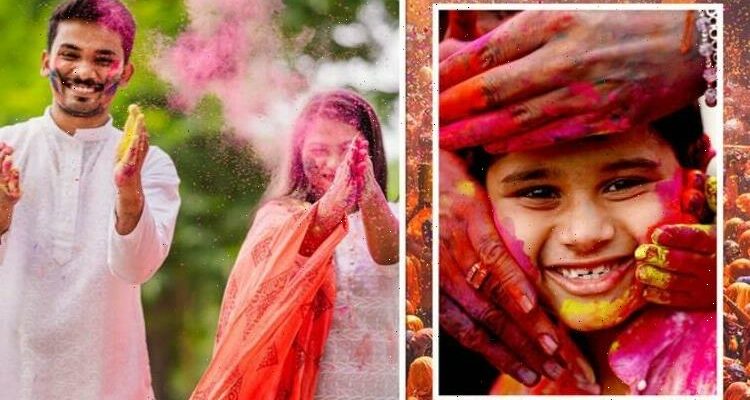 Hindus celebrate the arrival of spring with the Holy festival

Holi is a Hindu festival which is more widely known as the Festival of Colour. The event celebrates the triumph of good over evil and is spread over two days in March, often falling in line with the seasonal transition between winter and spring. Millions of Hindus gather to mark the occasion each year with an abundance of colourful paint, but when exactly will Holi begin this year?

This year Holi will take place on Thursday 17 March and Friday 18 March.

The two-day festival begins with Holika Dahan, which is celebrated by lighting bonfires to signify the victory of good over evil.

Hindus across the world – particularly in India – will gather with friends and family this evening to kick start the notoriously happy event.

After the first night is over, the tradition is to wake up early the following morning to play with vibrant colours in the form of paint.

The first full-day of Holi is officially referred to as Rangwali Holi, though it can also be called Dhuleti, Dhulandi, or Phagwah.

This day is dedicated to the playful throwing of powder and liquid paints and is known as “Gulal” – the most significant part of the entire festival.

It is widely believed that the paint-throwing is based on the legend of deity Krishna, who was self-conscious about the blue colour of his face which was caused by breast milk poisoning.

The festival celebrates the advice from Krishna’s mother, Devaki, who advised him to paint his face so that the colour didn’t matter.

What is the meaning of the Festival of Colours?

While the story of Krishna is one part of the festival, the story of the arrogant King Hiranyakashipu plays an important role in the meaning of the holiday.

It is said that King Hiranyakashipu asked to be worshipped as he believed he was invincible, but when his son Prahlada remained loyal to the god Vishnu instead, he punished him.

Prahlada’s disobedience resulted in an attempt from his “evil” aunt to burn her nephew to death, though her efforts failed when her magic cloak flew off her back to protect him, leaving her to die instead.

Good triumphs evil in the story when King Hiranyakashipu is destroyed by the god Vishnu.

The true meaning of the celebration is derived from this ancient turn of events, which has remained a prominent part of the culture for centuries.

Where is Holi celebrated?

Despite being known as an ancient religious festival for Hindus, the Festival of Colours has grown in popularity across several other continents beyond it, originating in India and Nepal.

Non-Hindu cultures in South Asia, Europe and even North America are just a few of the places that will see the event be commemorated over the two days.

For some, the festivities will last even longer, with the Braj region around Mathura in north India known to celebrate for up to a week.

This particular area is notorious for its own unique Holi tradition too, where men go around with shields and women have the right to playfully beat them with sticks.

Is Holi on the same date each year?

While the festival is recognised as a national holiday in both India and Nepal, the date of the event changes each year.

This happens because Holi is determined by the Hindu lunar calendar, rather than a specific date.

The date will vary depending on the position of the moon, though this generally falls around the end of March.