What does YOUR face say about you? From acne breakouts to ‘hot’ ears – the common physical symptoms that could be warning you of health issues

While western medicine should be relied on for treating serious health concerns, two Australian face mapping experts have revealed common facial ‘signs’ that could help identify problems early on.

Brendan Smith, founder of the Sydney acupuncture clinic Village Remedies, said from a Chinese medicine perspective, different areas of the face are believed to be linked to different organs.

‘The face is a map of the body and we can use it to tell us more about ourselves and our health in general,’ Brendan told FEMAIL.

Sydney nutrition and skin expert Fiona Tuck said there are some ‘easy-to-read signs’ that your body may be showing you and that any change is worth noting.

Some physical symptoms can be linked to internal issues and imbalances like digestive concerns, kidney deficiencies and thyroid issues. 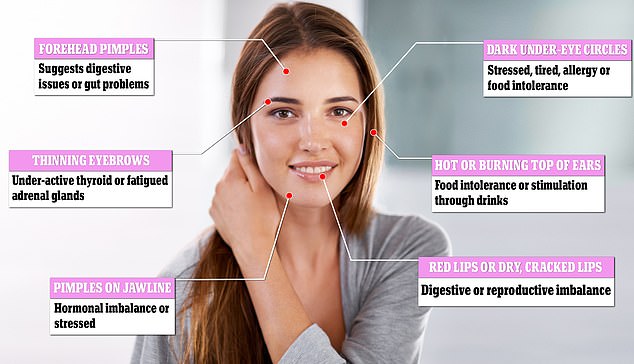 While western medicine should be relied on for treating serious health concerns, two Australian face mapping experts have revealed common facial ‘signs’ that could help identify problems early on

When delving into these facial ‘signals’ and the health concerns related, Brendan said it’s important to understand that in Chinese medicine, the organs are different to the scientific or western medicine way of understanding of them.

‘In Chinese medicine, the organ is considered a concept that encompass a region of the body, a set of physiological functions (some the same as western medicine but others that are different) and an emotion,’ he said.

Brendan said with this methodology, health concerns can often be overcome through acupuncture, herbal medicine and a change in diet.

Pimples along the jawline

Both Brendan and Fiona agreed that pimples along the jawline often occur prior to, during or after a women’s menstrual cycle or during ovulation.

‘Particularly among women, pimples on the jaw and near the mouth occur during the mid or end of their menstrual cycle and is often an indication that the hormones are out of sync, which can mean they are more likely to suffer from bloating or insomnia,’ Brendan said.

Fiona said an increase in stress or any internal hormonal imbalances can also cause pimples to occur along the jawline. 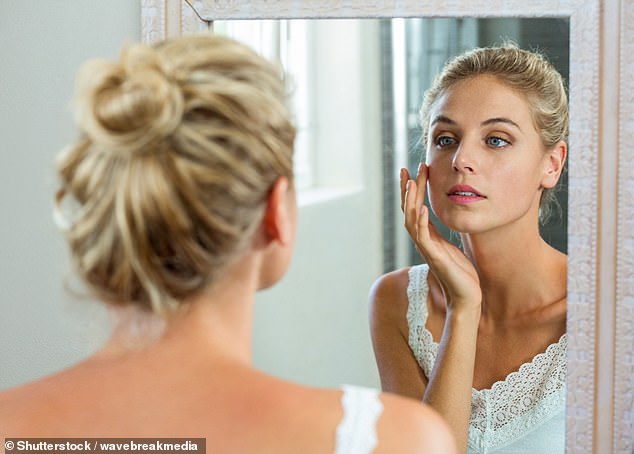 Both Brendan and Fiona agreed that pimples along the jawline often occur prior, during or after a women’s menstrual cycle or during ovulation

Pimples on the forehead

Other areas of the face can also suggest different bodily complications, such as forehead pimples or a red forehead often signal digestive issues.

‘In Chinese medicine, pimply, dry or greasy skin on the forehead can indicate that the individual is suffering from digestive issues, including IBS type symptoms, reflux, diarrhoea or constipation,’ Brendan said.

‘It can also indicate they are eating too many greasy and spicy foods, so a simple change in diet can often be enough to help improve the skin on the forehead.’

When considering the possibilities, Fiona said it’s important to contemplate ‘all topical and relevant factors’, such as stress, sleeping patterns, diet and lifestyle habits.

She said you need to consider the skincare products being used and whether constipation, diarrhoea or bloating is occurring to suggest other issues.

But when breakouts occur a little lower down between the eyebrows rather on the forehead, Fiona said this suggests liver-related issues, stress or consumption of too many fatty foods. 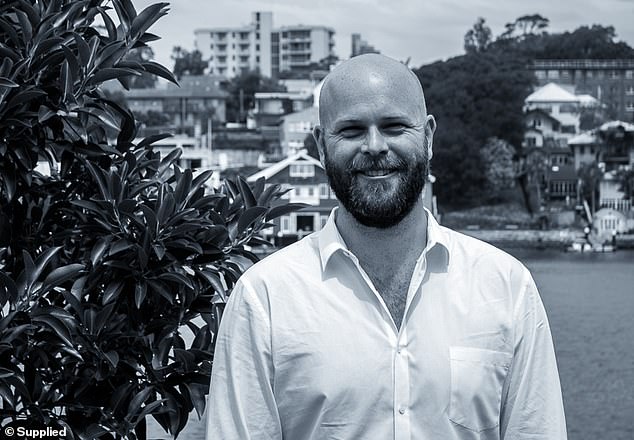 ‘In Chinese medicine, pimply, dry or greasy skin on the forehead can indicate that the individual is suffering from digestive issues, including IBS type symptoms, reflux, diarrhoea or constipation,’ Brendan said (pictured)

WHAT CAN CERTAIN FACIAL ISSUES INDICATE?

Pimples around the jawline – hormonal imbalances during menstrual cycle or stress

Pimples on the forehead – digestive issues, such as bloating, diarrhoea or constipation, stress, fatigue

Dark colour under the eyes – poor sleeping habits, stressed, allergies, food intolerance, kidney deficiency, or the skin is naturally dark due to genetics

Dry, cracked lips – digestive issues, such as constipation, or stress

Blood-shot eyes – fatigue, stress, lack of certain vitamins such as B12 and iron

Dark colour under the eyes 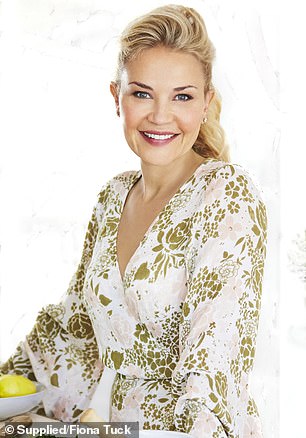 Dark circles or ‘bags’ under the eyes are common among many people, and Fiona said this trait is either genetic or a sign of fatigue, food intolerance or a lack of nutrients, such as iron.

‘Depending on someone’s heritage, the skin under the eyes can often be naturally dark, but in other cases it can be a sign of an allergy or food intolerance,’ Fiona said.

‘If someone has dark under-eye circles regularly, it might be the result of eating certain foods they are intolerant to.’

Brendan also said this facial signal is indicative of someone who is fatigued but can correlate to kidney deficiencies too.

As there are many possibilities, both experts suggest avoiding self-diagnosis and seeking help from a medical professional if needed.

Fiona and Brendan said red or dry, cracked lips can be an indication of digestive stress, such as constipation, as well as stress.

‘Dry, cracked lips can not only relate to digestive issues, but above the top lip specifically can correlate to the reproductive area,’ Fiona said.

‘Breakouts or hair growth above the lip can also be a sign of hormonal imbalances.’

Brendan added dry lips can normally occur from eating too much spicy and fried foods, and a change in diet can be help to improve this. 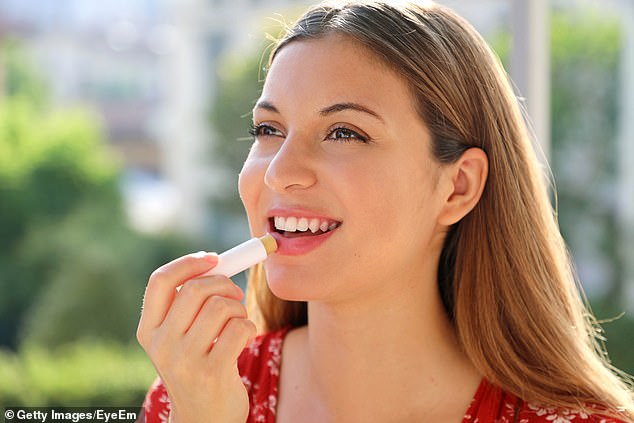 Fiona and Brendan said red or dry, cracked lips can be an indication of digestive stress, such as constipation, or stress

The eyebrows can be indicative of thyroid or adrenal gland problems.

‘Quite often when people lose the outer edge of the eyebrow or the hair starts to thin it can be a sign of a thyroid condition,’ Fiona said.

‘Or it could be linked to the adrenal glands, which is closely related to the thyroid.’ 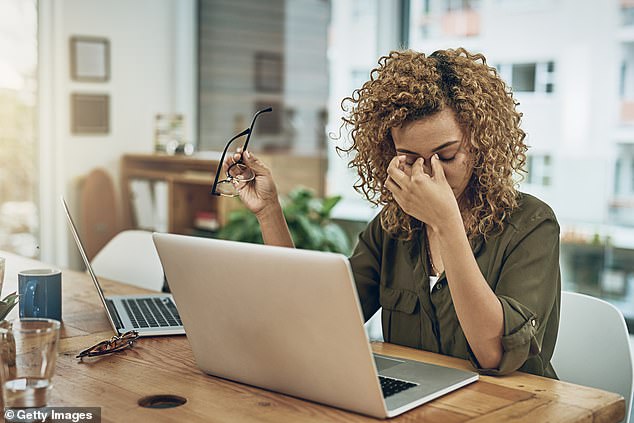 As there are many possible outcomes, both experts suggest avoiding self-diagnosis and seeking help from a medical professional if needed

In some cases, the ears can be an indication of more serious diseases related to cardiovascular health among older people.

‘A very deep vertical crease on the earlobe, called the Frank’s crease, can sometimes be a sign of cardiovascular disease,’ Fiona said, though this commonly occurs in elderly people.

‘Sometimes this crease may be nothing more than the way an individual sleeps at night, or can be an indication of something more.’

Brendan added those who have wrinkles at the bottom of their earlobes are often sleep deprived.

Brendan said vertical frown lines that often occur between the eyebrows sometimes indicate ‘long-term stress and that your body may not be able to regulate itself as easily’ or liver issues.

‘If this is the case, it can be trouble getting to or waking from sleep, or waking in the middle of the night, and for women this can affect the regularity of the hormonal cycle and lead to bloating, pain or insomnia at mid and end of their menstrual cycle.

ORGANS AND THEIR FUNCTIONS ACCORDING TO CHINESE MEDICINE

According to Brendan, some classic examples of the Chinese medicine organs and how practitioners can use them to help patients in day to day life include:

Heart – linked to healthy circulation and the emotion of joy. It is considered to be the ’emperor of the body’, and when it works well, so is the individual. If we can find something we are passionate about and live with joy, every aspect of health improves

Spleen – linked to the digestive functions, the body’s ability to process and absorb food and over thinking and worry. If we find we are over worrying, by simply having a regular and nutritious meal, we have more energy and a calmer mind

If we find that we often get sick, by being more physically fit this will strengthen our lungs and our body’s ability to fight off diseases

Kidney – responsible for urination, reproductive health, healthy aging and the body’s underlying vitality. It is linked to the emotion of fear

Learning how to take time out, reducing stress and getting enough sleep will help improve these functions

Liver – responsible for the smooth flow of our bodies functions, and ensure they occur at the right time. It organ is also linked to anger

Being tired during the day and awake at night, muscles feeling stiff and tight, or being overly irritable may relate to the liver

Meditation, exercise and having regular eating and sleeping times will all help the body feel more relaxed and be in time with the body’s normal flow