Promoting his new streaming series, Catch 22, George Clooney could have used last week's moment in the global limelight to turn attention to any of the 30-plus development, human rights and anti-poverty programs he supports.

Instead he used his profile to call out the horrendous treatment meted out to his friend Meghan Markle, Duchess of Sussex. 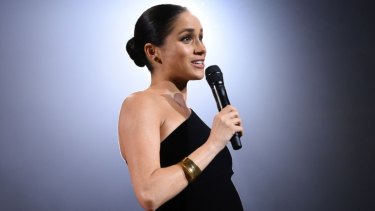 The Meghan Markle story arc has deteriorated into one long take-down, whose drivers are, sadly, predictable to observers.Credit:Joe Maher/BFC

"She is a woman who is seven months pregnant and she has been pursued and vilified and chased in the same way that Diana was and it's history repeating itself," he told entertainment journalists. "And we’ve seen how that ends. I can’t tell you how frustrating it is to see that."

Such is the appetite for brutal coverage of the former Suits star and gender equality activist, within hours of Clooney's statement, British media personality Piers Morgan was profiting from more dirt.

A standout line in his Daily Mail hit piece: "Is George Clooney a REAL friend, or just another famous person Meghan’s latched onto at the expense of those who until recently, she professed to care about most?" Those words in the paper that declared after last year's royal wedding: "Just 20 years ago, the monarchy seemed to be struggling for its very survival … How different the picture looks today.

"Prince Harry's wedding to the glamorous and thoroughly modern actress Meghan Markle … symbolised the monarchy's evolution into a contemporary institution – at ease with itself, outward looking and fit for the 21st century." Markle was permitted to identify her strong feminism on her official royal bio.

Observers such as Andrew Dodd, a culture and communications professor, say the turn taken in the narrative around a 37-year-old woman with her own track record of community activism was, sadly, predictable. Among the drivers for it are the tabloid idea, "We made you, now we have the right to tear you down … and there's also a kind of nasty jealousy in the mix."

"There is [also] a gender element to this; she is seen as a role model for young women, and African-Americans; she is a kind of totem for change … and has become the vehicle through which people can hatefully depict women and the monarchy."

The fairytale arc that was a nightmare for Diana over 15 years is happening (to Markle) over 15 months.

"It has been much more rapid than I've even seen it; the fairytale arc that was a nightmare for Diana over 15 years is happening [to Markle] over 15 months – it's almost like there is an impatience to get to the next narrative milestone … before anyone else does," says Dodd, who heads the Centre for Advancing Journalism at Melbourne University. 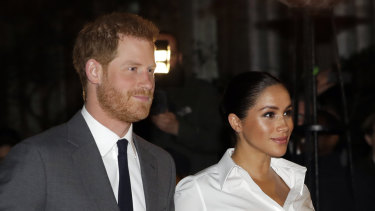 The Duke and Duchess of Sussex attending an awards ceremony on February 9.Credit:AP

"There is [also] a sense this person is so far removed from the person writing the story, this bile and negativity won't affect her."

This has gone to another level. The reality is she is a human being and this will be having real life impacts.

But Macquarie University media and communications professor, and gender commentator Professor Catherine Lumby says the "outrageous and sexist" coverage of Markle is most definitely personal.

Markle has been subject to a steady flow of negative headlines since late last year, which have set her up as brittle, demanding and "difficult".

Rumours include two of Markle's staff and one of Harry's quit due to the Duchess' unreasonableness and, of all things, rising early and expecting her staff to be available, and that she reduced the Duchess of Cambridge to tears during a bridesmaid dress fitting and a "messy rift" ensued.

She has been branded "the new Yoko" for allegedly causing problems between Princes William and Harry, and a social climber for having "ghosted" former friends (Piers Morgan claims to be among them), despite the fact that old friends have spoken up about Markle's loyalty and generosity. 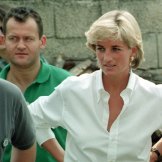 Perhaps the most pointed allegation is that Meghan is a bad daughter (hence, a bad woman) for blanking an ailing father — who sold staged pictures of himself to paparazzi in the lead-up to her weddin. He was originally coming to the wedding.

Professor Lumby says there is a theme at play:"It is completely gendered".

"She is a 'second' princess [duchess], so she's got to be cast as somehow the evil or the bad princess, as part of a contest between her and Kate Middleton. It is a fairytale basically, built into deep psychological and literary stereotypes about women being in contest and women who have privilege," she says.

"Clooney was completely on the money. What happened to Diana was a travesty. Yes, she encouraged media attention but she couldn't avoid media attention; in the end, to quote Martin Amis, she was pursued by the high-tech dogs of fame, the paparazzi, and we have not learned from that."

Lumby says Markle's mixed-race background is another factor in her targeting: "There are some deep social and cultural archetypes, stories you can fit people into; a narrative, and Meghan Markle is easily cast as the 'outsider'.

"She's of mixed-race heritage, and she's proud of that … and we also have archetypes about a woman when she comes in as 'older'." (Indeed, Morgan referenced Markle being "much older" than Harry; she is three years older.)

Some tabloids are "looking for a story that Kate Middleton is the perfect princess and Meghan Markle is inappropriate, the evil step-sister is a very old narrative".

"Unfortunately it is usually women who are dragged into it."

Sarah Ferguson, the former wife of Prince Andrew, made a similar observation in an open letter this month: “Women, in particular, are constantly pitted against and compared with each other in a way that reminds me of how people tried to portray Diana and me all the time as rivals, which is something neither of us ever really felt."

Says Lumby: "This has gone to another level … The reality is [Meghan] is a human being and this will be having real-life impacts. We know nothing about her as a real person, it's a persona constructed in the media and it's outrageous, incredibly archaic and sexist."

"Added to this, Meghan is a woman of colour, which is a point of interest for the media as the royal family symbolised and continues to symbolise whiteness and colonialism." 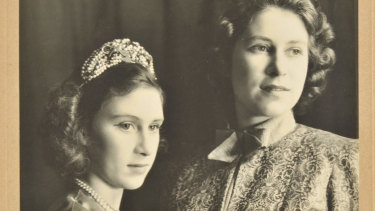 Of being pitted against her sister in the media, Princess Margaret (left), said: ‘When there are two sisters and one is the Queen, who must be the source of honour and all that is good, the other must be the focus of the most creative malice, the evil sister’.Credit:AFP

The star qualities of both Meghan and Diana and the fact they both have/had a "publicly difficult" relationship – Diana's with Charles and Meghan's with her father – has contributed to the "soap opera" built around them.

JaneMaree Maher, Melbourne University social sciences professor, goes further, describing it as a "particular type of vitriol" amounting to "abusive trolling" and "this idea that when a woman succeeds it's at the expense of another woman neglects the evidence of women supporting and taking care of each other, which they do all the time".

Given the "trope of the 'catfight'" never goes out of style, Sydney University academic Kate Lonie, agrees the coverage about Markle was bound to go the grubby way it has. She also names class snobbery (which was also evident after Kate Middleton arrived on the royal scene), and Markle transgressing expectations of royals to be apolitical as things held against her.

Lonie highlights Princess Margaret's famous quote about the way she and young Queen Elizabeth were treated as evidence of the enduring appeal of targeting one woman to tear down: "It was inevitable: When there are two sisters and one is the Queen, who must be the source of honour and all that is good, while the other must be the focus of the most creative malice, the evil sister.”

As the royal hunting pack gleefully tearing Markle apart may even acknowledge, how very unchanged the picture looks today.