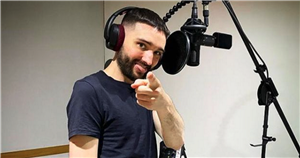 Tom Parker has passed away from a brain tumour aged 33, leaving behind his wife Kelsey, 32, and their two children: Aurelia, two, and Bodhi, one.

Tom was first diagnosed with a brain tumour in 2020, where he was told that in was inoperable.

With this in mind, he warned he only had 12 to 18 months left to live.

Discussing the heartbreaking news with OK! at the time, the singer had said: "I knew something wasn’t right, but I never expected it to be this. You never think this will happen to you."

As Mayo Clinic states: "Glioblastoma is an aggressive type of cancer that can occur in the brain or spinal cord. Glioblastoma forms from cells called astrocytes that support nerve cells."

Tom started treatment shortly after his heartbreaking diagnosis, and continued to stay positive as he kept his fans updated with his progress on social media.

The star underwent 30 radiotherapy sessions and 30 rounds of chemotherapy, but the impact of the treatment left him struggling to walk.

Here's what you need to know about Glioblastoma, as well as symptoms an treatment following Tom's heartbreaking battle…

The Mayo Clinic says that Glioblastoma can occur in people of any age, but typically occurs in older adults.

"It can cause worsening headaches, nausea, vomiting and seizures," the website continued.

Tests and procedures are carried out to diagnose Glioblastoma, including imagining tests and a neurological exam.

There can also be a sample of tissue removed for testing.

Mayo Clinic continues: "Glioblastoma, also known as glioblastoma multiforme, can be very difficult to treat and a cure is often not possible. Treatments may slow progression of the cancer and reduce signs and symptoms."

The symptoms include headaches, loss of appetite, loss of balance or trouble walking, mood swings, nausea and vomiting, problems with speaking and with memory.

The Mayo Clinic webite also discussed the treatment options, which include surgery to remove the glioblastoma to "remove as much of the tumour as possible," but "complete removal isn't possible."

Of Glioblastoma, WebMD says: "Brain cancers aren’t common. And when they do happen, about 4 out of 5 aren’t glioblastomas. Men are more likely to get them than women. And chances go up with age."

Following the news of his heartbreaking death, Hugh Adams, head of stakeholder relations at Brain Tumour Research, said to The Sun: "We are deeply saddened to learn of Tom's passing and send our deepest condolences to Kelsey, their children and all of Tom's loved ones. His loss will be greatly felt by his bandmates from The Wanted, their fans and throughout the pop world.

"Since being diagnosed with a glioblastoma multiforme (GBM) in October 2020, Tom has spoken openly and honestly about the impact of the disease and in doing so, has helped to raise awareness of the devastation caused by brain tumours."

He added: "Tom's tragic death highlights the fact that brain tumours kill more children and adults under the age of 40 than any other cancer yet, historically, just 1 per cent of the national spend on cancer research has historically been allocated to this devastating disease.

"We remember Tom for his passion, intelligence, eloquence and determination in the face of such adversity and will continue to remember him as we focus on our vision of finding a cure for all types of brain tumours."

A year after his initial announcement, he opened up about his cancer battle in a Channel 4 documentary, called Inside My head.

The singer tearfully explained how he initially struggled to process his diagnosis, saying: "I spent three months of last year just laying in that bed. There was just so much to contend with. You're not just dealing with cancer, you're dealing with how other people can treat you.

The star went on to explain that while he wanted a prognosis, his wife Kelsey and his brother didn't want him to find out.

The 33 year old also outlined his hopes of being cancer-free by March 2022, and told The Sun at the time: "You’ll always be classed as terminal.

"They give you 12 to 18 months of survival. But that’s the general statistics. Everyone we’ve ­spoken to has been way, way beyond that."

"Now, we’re aiming to be cancer-free by March. That’s the aim. This disease is always there. You might have residual cells but just not active. So, we’ll just carry on, just crack on and see where we get to."

In February, Tom and Kelsey jetted off to Spain for revolutionary treatment, with Tom spending a week in a private hospital.

He underwent the £4000 a week treatment in the hope of being fit enough to perform at The Wanted's upcoming comeback shows.

You can find more information and advice on Glioblastoma here

For your latest lifestyle and showbiz news, sign up to OK!'s daily newsletter here