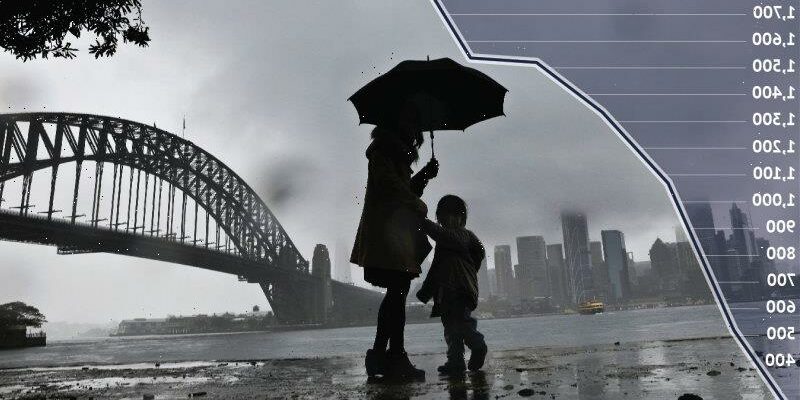 The last time that Sydney recorded its wettest year on record was in 1950 when Robert Menzies was prime minister, the baby boom was under way, and 2194 millimetres of rain was dropped on Observatory Hill within the year.

That record was broken on Thursday when Sydney notched up 2216.3 millimetres of annual rainfall rain by 5pm, with 86 days in the year to spare.

However, the rain is unlikely to ease during the remaining three months of the year, and meteorologist Gabrielle Woodhouse, from the Bureau of Meteorology, said climate change was partly to blame for Sydney being bombarded by rain.

“We are expecting wetter conditions to persist and we probably aren’t going to see that break down until we see the La Nina weaken and move back toward neutral territory as well as the Indian Ocean Dipole back to neutral,” Woodhouse said.

“Over the past 100 years or so we have already increased our average temperature by about 1.47 degrees so that means we can hold a hell of a lot more water in the atmosphere, which means that we are more likely to see heavy rainfall events.”

La Nina is a weather system that increases the chance of above average rainfall in spring and summer. Typically the La Nina event would have cycled through by now, but Australia is currently experiencing its third La Nina in a row, the first time on record.

Dr Martin Jucker, from the Climate Change Research Centre at the University of New South Wales, said that while climate change was likely to be a factor in Sydney’s wetter conditions, it was not the only reason for the record-breaking rain.

Jucker said Sydney’s soaking was largely due to a combination of weather phenomenons: La Niña, the Indian Ocean Dipole and the Southern Annular Mode.

All three of these phenomena are climate drivers, and Jucker said that Australia’s east coast was experiencing an unfortunate mix of all three at the same time.

However, he said the wild weather wasn’t uncommon for this time of year but the rain has been more problematic because dams and rivers are already full.

“Spring and autumn are really the two seasons with the highest uncertainty. Anything can happen around now. So, it’s normal that we get rain, and if we didn’t have all this rain before this month then it wouldn’t be a problem.”

On top of the climate drivers, the eruption of the Hunga-Tonga-Hunga-Ha’apai submarine volcano in the South Pacific put a large amount of water into the stratosphere, Jucker said.

Unfortunately, for Sydneysiders and the rest of people living in NSW the rain is likely to persist through the Christmas and New Year period and into 2023, he said.

“There is this La Nina which will almost certainly not go away until the end of the summer. Unfortunately, there might be no relief until the autumn at least, he said.