In Jonathan Coman’s childhood home, a box of human bones was kept under the staircase.

“We kind of had a sixth person in our house,” Coman says of the partial skeleton. “I found it kind of morbidly fascinating in some way, and a little bit unsettling.” 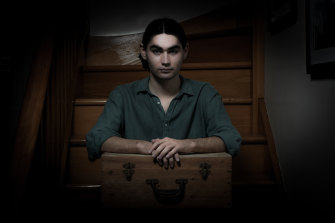 Jonathan Coman grew up with a box of human bones under the staircase.Credit:Justin McManus

As Coman got older, he started asking questions. He found out his dad bought the bones while studying medicine in the 1980s, when it was routine for medical students in Western countries to purchase them to study anatomy.

Back then, the trade of human bones mirrored that of textbooks: They were sold at academic bookshops, advertised in the trade post and exchanged on university campuses, with little regard to the origins of the bones or the ethics of owning human remains.

The medical elite vaguely understood that India was the booming bone trade’s key supplier, but their curiosity stopped there. That most of these skeletons were illegally dug out of graves or fished out of the Ganges without the permission of the deceased remained a well-kept secret.

Coman launched an investigation into the ethical and legal complexities of possessing human skeletons for a VCE project and has kept the research alive five years on, as a law student at Monash University in Melbourne. It is the first comprehensive look in Australia at the scope of private ownership of human bones, the morbid history of the global bone trade and the difficult questions of what to do with them.

Of the nearly 400 doctors surveyed in his recent article published in the Medical Journal of Australia, 44 per cent acquired bones for medical studies and half of these people still have them.

Of the people who still have the bones, 40 per cent said they wanted to keep them, with many reporting the skeletons held sentimental value, but 33 per cent were inclined to give the bones up.

Anne-Maree Kelly, a senior emergency physician and academic at Western Health in Melbourne who is working with Coman on the research, bought half a skeleton for $30 when she was a student at Melbourne University in the 1980s.

The bones were advertised on a notice board in the university library, where she bought them from another student and lugged them on the train home to Blackburn.

Kelly knew the bones came from India, but like most people at the time, she didn’t think much of it.

“It was sort of thought that, ‘Oh well, the education of doctors outweighs any ethical issues’. We would of course not accept that today.”

The unregulated bone industry largely ceased in Victoria when the trade of human bones was outlawed in 1982. Medical students now study human bones that have been legally donated to an authorised school or learn from plastic replicas.

But people are still allowed to privately own human remains under Australian law – a fact that gravely worries Coman. A process for returning the bones of the dead in a safe and respectful way is desperately needed, Coman says, but he is the first to admit there are no easy answers.

Those trying to return the bones to universities have been rejected and so have opted to cremate them in their backyards or give them to authorities, raising the police’s suspicion.

Paul O’Hanlon, a doctor, took his bones to the local police station in Doncaster in 2014 and was met with a junior police officer’s bewildered look and a Coronial inquest.

“I couldn’t believe they did a post-mortem on an old set of 50-year-old bones,” O’Hanlon tells The Age. “It seemed ridiculous to me.”

Moving forward, Coman says a “bone amnesty” similar to the one existing for firearms should be introduced to protect bone owners.

But how the bones could be disposed of in a way that is culturally and religiously sensitive remains unresolved.

“There’s no easy fix, unfortunately,” Coman says. “Which is why it has probably been under-prioritised in the medical and legal community for so long.”