Ron Rivera opened Washington’s training camp Tuesday by expressing frustration about a lack of vaccinations among players, which has caused the cancer survivor to practice extra caution.

Rivera said he believed Washington is now over half the players in camp fully vaccinated. The NFL last week said 80% of players have started the vaccination process and that 27 of 32 teams had at least 70% of players either receive one vaccination shot or both.

Washington is not one of them — actually closer to 60% — and it has caused Rivera to take precautions.

“I’m truly frustrated,” Rivera said at his camp-opening news conference. “I’m beyond frustrated. One of the reasons I walked in with a mask on is I’m immune-deficient, so with this new variant, who knows? So when I’m in a group and the group’s not vaccinated or there’s a mixture, I put the mask on, and I do that for health reasons.”

Rivera was treated for skin cancer last year. His players’ vaccination hesitancy is one of many questions going into Rivera’s second camp as Washington’s coach.

Washington was one of two teams under 50% vaccinated in mid-July. Offensive tackle Cornelius Lucas was placed on the NFL’s COVID-19 reserve list Tuesday. 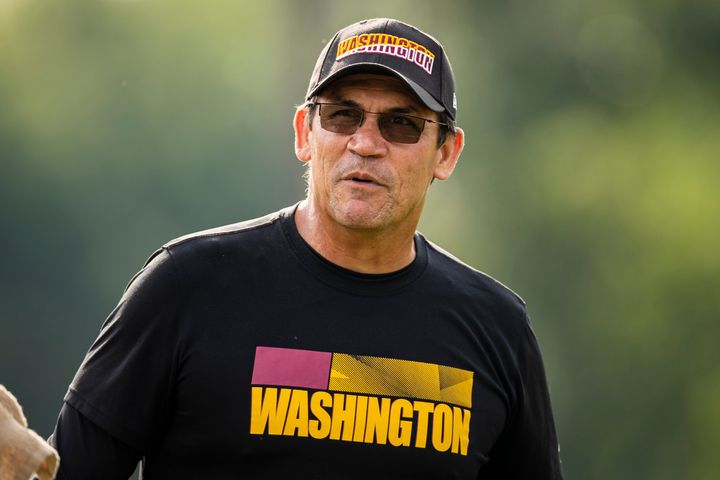 The league sent a memo to teams Thursday telling them that an outbreak among nonvaccinated players could lead to forfeits with players on both teams not getting paid.

“It could be a huge, huge disadvantage,” he said, citing Denver’s virus outbreak last season that caused the Broncos to start a rookie receiver at quarterback. “Based on the rules, you’re risking not just your paycheck but other people’s paychecks, too, if there’s no game played. I think that’s something that we all have to think about.”

And it’s not like Rivera and his staff haven’t tried. Washington brought in Harvard immunologist Kizzmekia S. Corbett, who helped develop the Moderna COVID-19 vaccine, to speak with players during minicamp in June. Third-year pass rusher Montez Sweat at the time said he doesn’t support the team’s attempt to persuade players to get vaccinated and “probably won’t get vaccinated until I got more facts and that type of stuff.”

“We have a group of guys that want more information and the frustrating part is we’re trying to provide it as quickly and as much as possible,” Rivera said. “They still have to make their own decisions.”

Collins, who had surgery on his torn left Achilles tendon last fall, was not one of the players put on the physically unable to perform list Tuesday. Receiver Curtis Samuel and cornerback Greg Stroman went on PUP, while safety Deshazor Everett and defensive tackle Tim Settle were put on the non-football illness list.

Scherff is playing a second consecutive season on the franchise tag and is all but certain to leave before 2022 if he and the team cannot work out a multiyear contract.

Washington answered a couple of questions on the eve of camp, which begins in earnest for players Wednesday with the first full practice. Defensive tackle Jonathan Allen agreed to terms on a four-year extension through 2025 worth $72 million, and tight end Logan Thomas got a three-year extension beyond this season.

Rivera was glad to get those deals done.

“These are guys we believe fit us going into the future,” he said. “It gives them some stability, and it shows other players that we most certainly are working to keep our own. That’s how you build a team: You sign those guys and keep those guys around.”

Coming off an NFC East title at 7-9 and a loss to eventual Super Bowl champion Tampa Bay in the wild-card round, Rivera’s message to players is that “it’s go time.” That could include going to get a vaccine shot given the concern about rising virus rates for those who have not been inoculated.

“The thing that still looms over our head unfortunately is the whole COVID situation,” Rivera said. “As a football team, as individuals, we have to understand what’s truly at stake in terms of opportunities going forward, and we’ll see. We’ll see how it all unfolds, and to some degree this tells us a little about us.”