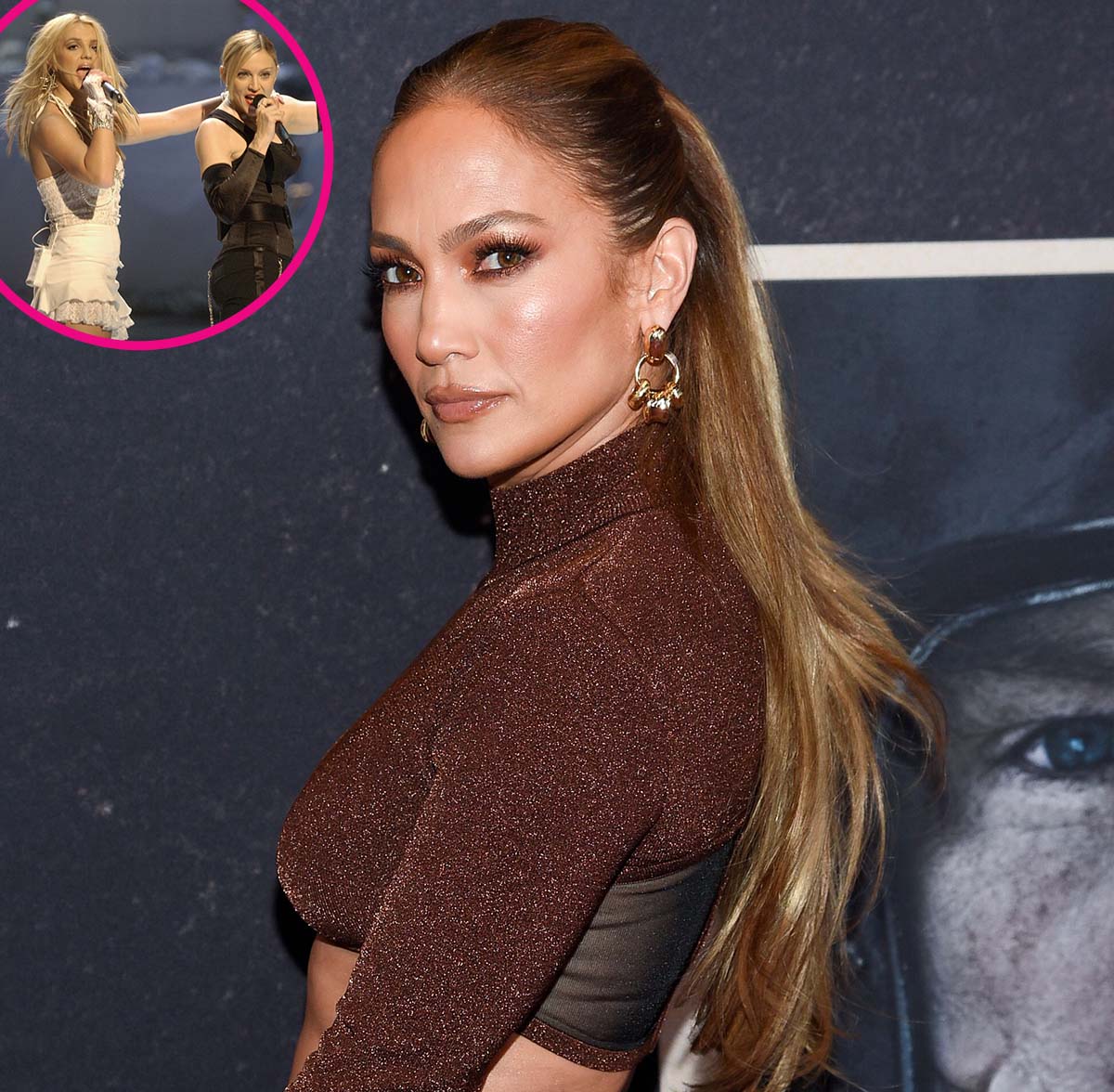 Ain’t it funny! Jennifer Lopez revealed she was supposed to kiss Madonna at the 2003 MTV VMAs — but the show asked Christina Aguilera to fill in after the “Waiting for Tonight” singer couldn’t attend.

VMAs’ Wildest Moments Through the Years

“Yes, that was actually true. I was filming a movie in Canada and we had met — me, [Madonna] and Britney [Spears] — to do it at her home. And then I just couldn’t get off the film,” Lopez, 53, told E! News in an interview published on Tuesday, January 17. “So we couldn’t do it. … Then they got Christina Aguilera to do it. But yea, we talked about it.”

She added, “I’m a huge fan of Madonna. I always have been.”

The now famous 2003 performance — during which Spears, 41, popped out of a wedding cake dressed like a bride and sang “Like a Virgin” — paid homage to the 64-year-old “Vogue” singer’s 1984 act. Aguilera, 42, and Madonna later joined the Spears on stage and the trio shared a steamy smooch.

However, while both women locked lips Evita star, only Spears’ kiss was shown on TV after cameras cut away to catch ex-boyfriend Justin Timberlake’s reaction.

“It was weird,” Aguilera told Andy Cohen during a Sirius XM radio interview in 2018. “They cut away to get Justin’s reaction. It was a cheap shot. I saw the newspaper the next day and I was like, ‘Oh, well, I guess I got left out of that one.’”

In September 2020, the “Fighter” songstress further opened up about her part in the pop culture staple — and why it wasn’t as salacious as people claimed — during a conversation with Apple Music’s Zane Lowe.

“Shock value gets more and more extreme or whatever. But honestly, at the time, yeah, I never thought anything of it,” she explained. “It was like, ‘OK, it’s two girls kissing.’ It wasn’t shocking back then. It’s not shocking now, to me. But it’s so many things.” 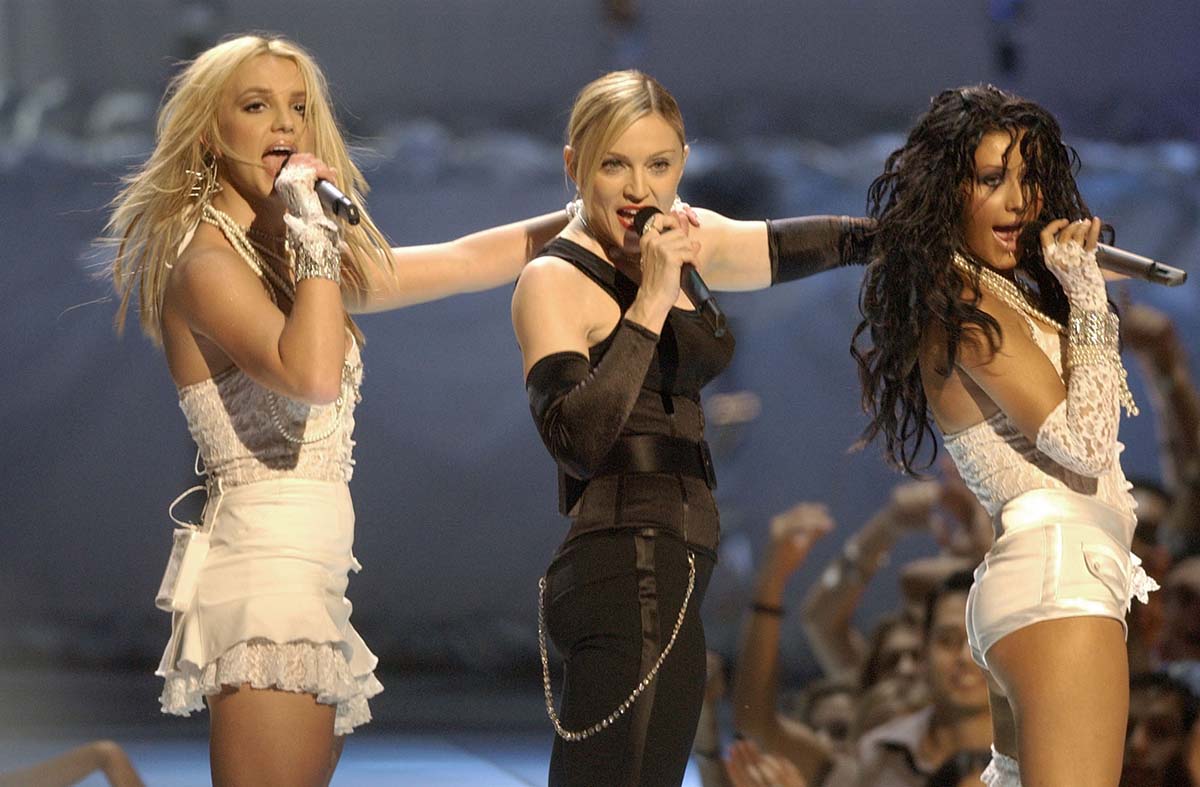 The Grammy winner added that despite her smooch not making headlines, she holds no grudges about how the night unfolded.

“I mean everything happened so quickly back then and everything was in a whirlwind,” she told Lowe, 49. “But I had my own performance that night. It was ‘Fighter’ and it was with Dave Navarro. It was a kickass performance. So I was OK with that.”

Aguilera may have moved on from the performance, but Madonna and Spears have often talked about recreating their kiss on stage. In January 2022, the “Papa Don’t Preach” songstress opened up about her desire to perform with the “Circus” artist again.

“Hell yeah, I have to,” she replied via an Instagram Livestream after a fan asked if she would do another world tour in the future. “Stadium, baby. Me and Britney [Spears], what about that? Yeah, I’m not sure she’d be into it, but it would be really cool. We could, like, reenact the original kiss.”

While the pair haven’t been able to share the stage again quite yet, they did lock lips at the “Stronger” singer’s June 2022 wedding to husband Sam Asghari.

Britney Spears Through the Years

“Kissing the one and only Madonna 💋 !!!” Spears wrote via Instagram in June 2022 alongside a photo of the twosome sharing a kiss. “I didn’t know Madonna has almost as many number-one singles as The Beatles !!! So honored she came to my wedding … perspective … The Beatles have 20 and miss thang has 12 !!!”

Asghari, for his part, jokingly responded to the moment in the comments section at the time, writing, “Minutes after we got married you cheated on me 🤬🤬🤬.”