A mysterious woman flanked by two blue jaguars welcomes you to an infamous South American jail.

You don a golden mask, step inside and take a surreal journey among guards, prisoners, spirits and animals. 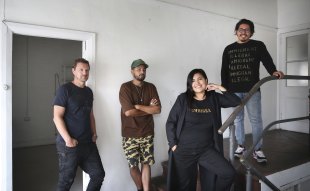 Violeta Ayala’s virtual reality film Prison X, which will have a world premiere at Sundance Film Festival on the weekend, imaginatively suggests what it’s like being a drug mule cast into San Sebastian Prison in Bolivia. 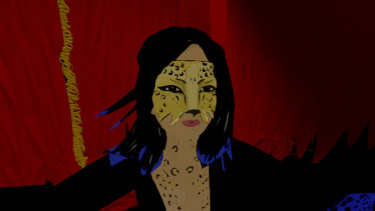 It was inspired by the three years that she and producer Daniel Fallshaw spent shooting the 2017 documentary Cocaine Prison in a jail packed with more than 1000 drug mules, petty thieves and their families before the pandemic.

Ayala, a Bolivian-Australian of Indigenous Quechuan heritage, wanted to offer viewers a different experience of a prison that has its own hardware store, chapel, restaurants, school, nursery and gym. It’s a film that is immersive, interactive and fuelled by Andean myths. 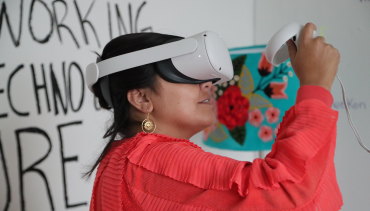 “You are the narrative”: writer-director Violeta Ayala during production of Prison X.Credit:United Notions

When she discovered virtual reality, which involves watching through a headset using hand controllers, she found the perfect format.

“While I adore documentary, because you can make so much poetry and it changes you every time you make a film as a person, I think storytelling has no limits,” Ayala says.

“There is a lot of things that you cannot tell with your camera, that a camera cannot capture – a lot of myths and traditions and feelings and ideas.

“That’s why I really got interested in virtual reality – it gave me the tools. It was about writing a visual language. The moment that I understood what was possible was the moment that I said I’m going to do it.”

Ayala, who also voices a character called the Jaguaress in the film, grew up three blocks from the prison so she found jails strange when she moved to this country.

“For me prison is a place where you lose your freedom but you don’t lose your human rights,” she says.

While there are hard-core jails in Bolivia, the low-security San Sebastian Prison allows the mostly Quechua inmates to lock their own cells, earn money by working jobs such as carpentry and tailoring, sleep, wake, study and have visitors whenever they like. 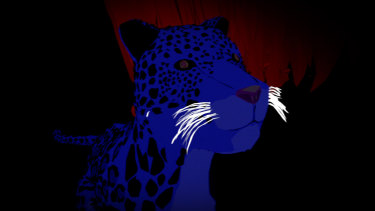 One of the jaguars in Violeta Ayala’s virtual reality film Prison X.Credit:United Notions

“It’s about humanity,” Ayala says. “It’s about the mixture of cultures between the Spanish and the Quechua. Bolivia is one of the most Indigenous countries in all the Americas. Seventy per cent of our population are Indigenous.”

As virtual reality technology gets cheaper – with an Oculus headset coming down from more than $1000 plus a computer to less than $500 late last year – she believes it will democratise animation. 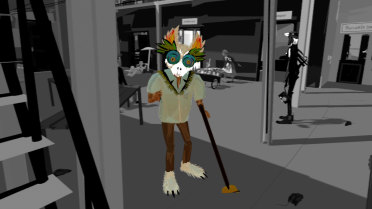 “Storytelling has no limits”: inside the virtual reality version of San Sebastian Prison – fuelled by imagination and Andrean myths – in Bolivia. Credit:United Notions

Ayala says the development of virtual reality technology has accelerated during the pandemic.

“What was taking three years to come along is taking two or three months in COVID times because people are investing in this technology in a way they weren’t before,” she says. “The next step is artificial intelligence. Very soon you’ll be able to talk to these characters and they’ll be able to talk back to you.”

Adds Fallshaw: “The event that really kickstarted the television set as something that everybody wanted was the moon landing. Everyone wanted to see it, everyone wanted to get a TV. Perhaps COVID is an event like that for virtual reality, for headsets.”

With the pandemic raging in the US, Sundance is hosting premieres and events online as well as screenings in art-house cinemas and drive-ins.

While an online premiere will mean a wider audience, Ayala says it is bittersweet not being at the festival.

“When you’re there, you’re with a lot of artists and creators from all over the world,” she says. “And nothing can replace having an audience talking to you.”

Viewers with a virtual reality headset can watch Prison X at the Sundance Film Festival web site from Saturday.